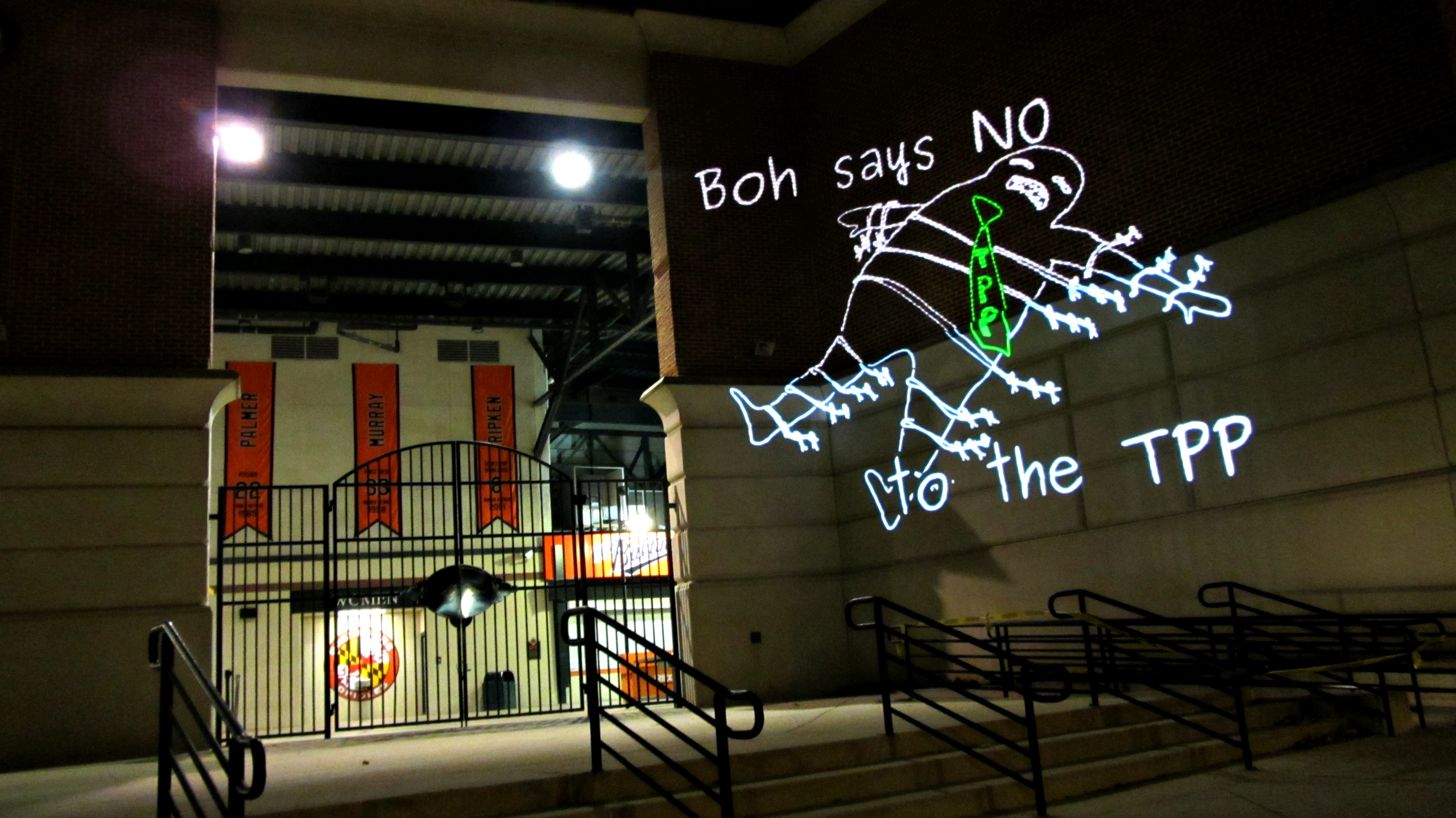 **Opposition to the TPP is growing quickly. Last night there were actions to expose the TPP in a dozen cities from coast to coast. This morning, Wikileaks released the full text of the Intellectual Property chapter of the secret TPP. And today, we also announce that bipartisan opposition to Fast Track is growing in Congress (see press release from Citizens Trade Campaign below). Grassroots efforts are working, but we aren’t there yet. Please click here and here to find more actions that you can take to stop the TPP. And join the communities that are saying “We Won’t Obey the TPP.” Find out how by clicking here.**

“With trade negotiators rushing to conclude the massive Trans-Pacific Partnership, it’s heartening that so many Members of Congress are standing up and demanding that each provision of the pact be scrutinized to ensure that it is in the best interests of working families,” said United Brotherhood of Carpenters General President Douglas J. McCarron.  “The middle class cannot afford for the TPP to become a ‘NAFTA of the Pacific,’ and at this stage in the game, only real Congressional oversight and intervention will prevent that from occurring.”
“The Trans-Pacific deal will affect working families, environmental protections, energy policy, food safety and more,” said Sierra Club Executive Director Michael Brune.  “Congress is right to want to do its job and have oversight over expansive trade pacts.  Using Fast Track is like removing the seat belts and airbags from a vehicle and racing it toward its final destination.  It’s an egregious way to speed up trade deals, which all too often put foreign corporations before families and communities.”
The 151-signature DeLauro-Miller letter sent to the President today states, “we will oppose ‘Fast Track’ Trade Promotion Authority or any other mechanism delegating Congress’ constitutional authority over trade policy that continues to exclude us from having a meaningful role in the formative states of trade agreements and throughout negotiating and approval processes.”  Signers include 18 of 21 Ranking Members from the full committees and 73 from subcommittees, as well as other important members of Democratic Party leadership.
While seven members of the Ways & Means Committee did sign the DeLauro-Miller letter, an additional letter from Democratic Ways & Means members, led by Representatives Mike Thompson (D-CA) and Earl Blumenauer (D-OR), was also sent to the President on Friday, stating that any new trade authority “must reflect the changing nature of international trade and ensure that Congress plays a more meaningful role in the negotiating process than in the 2002 TPA [Trade Promotion Authority].”
Republicans have also expressed opposition to Fast Track, including through two letters signed by 27 members.  One letter, led by Representative Walter Jones (R-NC) and signed by diverse GOP House members from Representatives Don Young (R-AK) and John Mica (R-FL) to Michele Bachmann (R-MN) and Steve Stockman (R-TX) to Frank Lobiondo (R-NJ) and Frank Wolf (R-VA), stated, “we do not agree to cede our constitutional authority to the executive through an approval of a request for ‘Fast Track Trade Promotion Authority.'”
“This isn’t a left-right issue; it’s a right-wrong issue,” said Citizens Trade Campaign Executive Director Arthur Stamoulis.  “All Members of Congress should add their voices to the chorus opposing Fast Track’s outrageously anti-democratic type of policy making.”
The Obama administration and various corporate lobby groups have urged Congress to pass new Fast Track legislation for the TPP and other pending trade agreements.  The administration has said they are pushing to complete the TPP negotiations by the end of this year, although few observers believe they will meet that deadline.  Chief TPP negotiators for the twelve-nation pact will be meeting in Salt Lake City, Utah from November 19 to 24.
“Negotiators meeting in Salt Lake City this month should be aware that the U.S. Congress will demand more of them on currency, labor, the environment and other topics than USTR appears to be doing,” said Stamoulis.  “Likewise, many Members of Congress have a strong distaste for USTR’s extreme positions on medicine patents and special investment courts.”