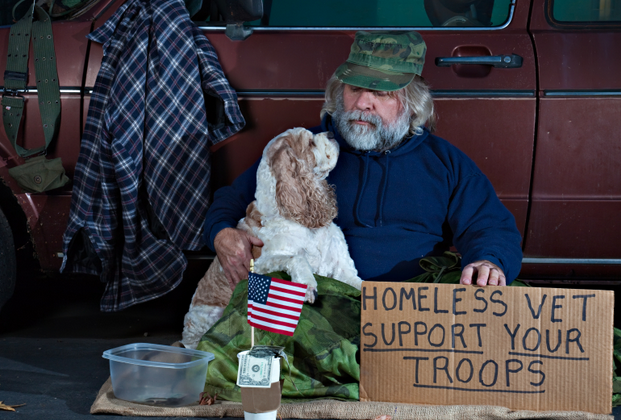 Photo: Connecticut has just recently come up with a solution for ending homelessness among veterans by finding them permanent housing. Now lets just hope other states can get on board.

On Thursday, the federal government announced that Connecticut is the first state in the country to end chronic homelessness among veterans.

That means the state has found permanent housing for all veterans who have been homeless for at least one year or four times in the past three years, or has an immediate path to housing in place for them. A one-day survey in February found 18 veterans experiencing chronic homelessness in the state, just nine of whom were living without any shelter. Gov. Dannel Malloy (D) said that the state’s ongoing efforts have found permanent housing for a total of nearly 300 chronically homeless veterans.

The governor credits state investments in affordable housing for the milestone, including at least $3 million in rental subsidies and obtaining an additional 129 housing vouchers from federal agencies. Many agencies and organizations have also been working together to identify homeless veterans and secure housing for them.

One reason for the focus on ending veteran homelessness by the end of the year is to prove that homelessness is a solvable problem. While the country has more than 600,000 people experiencing homelessness on any given night, mass homelessness on that level is a relatively new phenomenon and one with clear solutions. In 1970, before today’s homelessness epidemic, there was a surplus of 300,000 affordable housing units. Today, there is a 3.2 million shortage. There are mechanisms and funds that, if given the right resources, could fuel enough affordable housing to give everyone a home who needs it. If the country can house all of its homeless veterans, it should go a long way toward proving it can do so for all other homeless populations.

Spending those resources would actually come with savings in the long run.Multiple studies across the country have found that it saves millions to house the homeless rather than leave them outside by averting emergency room and policing costs.