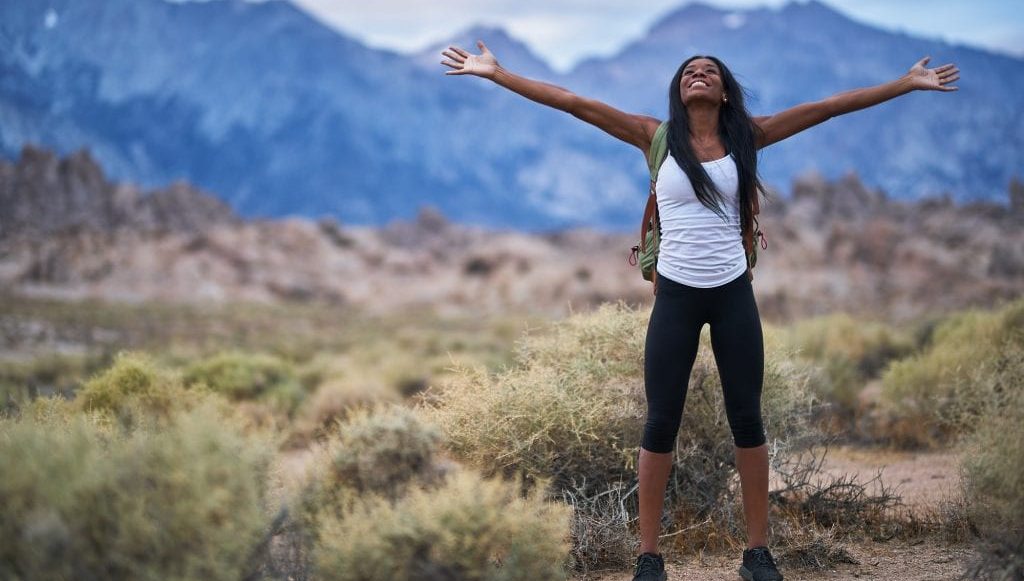 Earlier this year, political scientist and Black feminist Julia Jordan-Zachery asked the question, “What do Black women think about the rain?” She was sharing emergent questions from her research pertaining to Black women, not specifically related to environment studies. Her question echoed some of my own inquiries into the conversation between water, skies, fire, and the currents of Black life. Her question also posited that Black women, complex and disparate, observe and connect to the phenomena called nature. Jordan-Zachery presented a path into the brambled and verdant terrain of Black people’s wonder and delight in the natural world.

Environmental scholar Carolyn Finney notes that “One of the biggest challenges for individuals whose work is considered ‘environmental’ is how quickly anything related to African Americans and the environment get designated as an ‘environmental justice’ concern.” The environmental justice movement in the US, along with its conjunctive scholarship, took shape around the politics and praxis of communities of color addressing the historically patterned ways they were affected by environmental risk and destruction. From toxic waste to contaminated drinking water, communities mobilized against the interconnected concerns of environmental and racial injustice, unaddressed by mainstream environmentalism. One result was an interrogation of western environmental advocacy’s uncritical ideas of preservation and conservation. These ideals of the white mainstream environmental movement, influenced by early transcendentalist and naturalist thinkers, neglected the racial, gendered, and classed ideologies that infused conceptions of the natural world, the structural effects of racism on environments and communities, as well as people of color’s rich and instructive relationship with nature.

Scholars such as Finney and Paul Outka have unpacked the racialized histories and ongoing socialities that account for such radically different experiences and views of nature. As Dorceta Taylor argues, environmental justice thought—in its linking of the environment, labor, and social justice—represents a shift in paradigm in environmental work. What remains less palpated, however, is what exists beyond such categorial understandings of environmental justice, history, politics, or recreation. Jordan-Zachery’s elegant question guided me, in its Black feminist orientation, to hone in on a part of the network of Black ecological thinking that is alive but less pronounced—a philosophical and theological sensibility to the everyday relations of Black people with the earth’s elements and movements.

Inquiries such as Black women’s thoughts on the rain invite deeper consideration of Black people’s sensate experiences of the natural world. This query does not seek to re-essentialize a romantic ideal of nature or privilege joy, nor does it carry a political strategy. It is a summons into the vitalizing potential of Black relations with the non-human world, including the ways Black people find pleasure, renewal, and meaning in different environments. There are a host of historical, social, political factors, as Finney details, that contribute to this domain being overshadowed in our conversations. But I submit that its exploration can revitalize our sense of humanity, ecologically expand our awareness of being part of life, and thus, guide how and why we continue in these periled human and environmental times.

Such work has precedent. The first principle of environmental justice articulated at the First National People of Color Environmental Leadership Summit in 1991 states the following: “Environmental Justice affirms the sacredness of Mother Earth, ecological unity and the interdependence of all species.” This sacred dimension of Black people’s relationship with the natural world gives language to the sometimes-ineffable experiences that co-exist with the historical and persistent realities of racial oppression and environmental destruction.

MaVynee Betsch’s reflections on her experience of American Beach offers an example. The famed environmentalist made a sanctuary and politics out of the preservation of this historically Black beach. Her advocacy came in traditional forms of public speaking, organizing, and resources, but it lived within her making a home on the shore, letting her hair lock and grow, and allowing the sun and salt water to almost reclaim her. She said about this beloved environment:

Often people come here and tell me “it’s so strange when I sit here, it’s as if all my troubles go out with the next tide.” I must admit this is one of the things that I love here. It’s such a spiritual high…. But then there are the nights…. I am sitting on that beach when I hear those voices [of enslaved ancestors], it’s like they are giving me that pain that I need again to keep fighting, to keep knowing that there must be justice.

Bestch’s experiences living as part of the beach’s ecology intones the sacredness of a relationship that can support the anguish and dispossession of a history of racial terror, while offering regeneration, even vigor. Betsch’s presence, similar to her voice, evokes a contemplative and theological orientation that suggest how her political and social engagement, as well as her being, were nurtured by living in profound connection with her environment.

The nuanced ways and often fraught contexts in which Black people experience restoration and inspiration in nature deserve dedicated time and attention. Black folks have and continue to express sensibilities towards the non-human world and its resplendence often as part of a robust ecological ethos. We can revisit Harriet Tubman and her North Star, maroons and the Great Dismal Swamp, the inspired writings of Zora Neale Hurston and her kindred spirit Alice Walker, for perspectives and footprints. There are lineages and tributaries in these works, as Romy Opperman documents, yet they are not distinguished as Black contemplative ecologies.

In February, I joined seven other scholars on a panel on Black Feminist Ecologies. The scholarship of colleagues in this salon illustrated how Black ecologies, in resonance with environmental justice, have made a habitat for conceptualizing historical and social ecological entanglements with human oppression; and, the panel conveyed, broadly put, how some of the most powerful ecological forces are Black women and their feminist praxis. Chelsea Mikael Frazier observed a similar dimension to these endeavors. In response to the complementary yet diverse concerns of the panel, she recognized the energy of personal reflection that underpinned panelists’ projects, in her words, “almost abolish[ing] any notions of objectivity.” Rather than a commentary undermining the rigor or viability of our scholarship, Frazier attentively analyzed as she affirmed the intentionality and focus of the work to inform, serve, and sustain. Paying attention to the steadfast energy of Black feminist praxis, Frazier describes Black Feminist Ecological Thought as “keep[ing] our appetites hungry for images, words, and stories” that I suggest encourage our ecological work to feel more, and to keep searching for the interconnections within all of life.

Alexis Pauline Gumbs joins Betsch with another example. In Undrowned: Black Feminist Lessons from Marine Mammals, Gumbs turns her Black feminist ethos into a loving fascination with the non-human world. In observation of dolphins, she reflects:

Yes. I want a dorsal fin. I think I can make one if I practice. What are your dorsal practices?…What are the ones you need to cultivate for the waves moving you now?… I am grateful especially for my dispersed and displaced kindred, for teaching me to find stability in practice when, for our communities, housing and financial stability are often out of reach and capitalism tears our roots up again and again. Out here in the ocean we have our breathing and our practices. We have each other if we choose each other.

More than a metaphor, Gumbs has us reckon with the grandeur and proficiency existent with the non-human world, that show us a way forward, including imparting what capacities and features must be imagined and grown to sustain ourselves. Dolphins, like humans, are at environmental risk and we may find solace and companionship, in addition to instruction, in their presence and survival. From the vantage of Betsch’s shoreline gaze to Gumbs navigation of open waters are Black women communing with, even enjoying the natural world, as a refuge and inspiration for a Black vitality under duress.

Since the panel, I have joined the tentative language of the sacred with wonder and delight to make room for a secular as well as spiritual attention to these Black ecological relations. This I am calling a contemplative Black ecological sensibility. I am much less interested in the project of naming than to encourage inquiry and observation of the nourishing and inspirited ways Black folks relate to the non-human world, including their interrelated survival, but also the non-human world’s continuance. I wish to animate these dimensions within our environmental justice and Black (feminist) ecological work.

There are already voices and relations to contemplate. This approach includes attending to the philosophical lenses of the aforementioned Tubman, Hurston, and Walker, as well as revisiting those of John Francis’s years of silent walking, Rahawa Haile hiking the Appalachian Trail, and the intellectual elders of environmental justice like Robert Bullard, Beverly Wright, Dorceta Taylor, and Hazel Johnson. It also asks that we read or re-read more recent voices such as Tiffany Lethabo King, Chanda Prescod-Weinstein, and Ashanté Reese, to name only a few, for the contemplative thread in their ecological thinking. Black physicists, farmers, gardeners, anglers, cowboys have much to impart.

The philosophical, sensual, and devotional dimensions of these writers and thinkers, including Betsch, Gumbs, and Jordan-Zachery, provide sustenance and satisfaction as well as critical knowledge for how to invite and sustain generative ecological relations, even with their asymmetries and impasses. Staying awake and aware of the multiplicity of experiences of the natural world enriches the political, social and existential work already in motion, and contributes another framework for sustaining Black life and ecologies, especially during in our troubled ecological times.