‘Continue The Fight!’: A ‘98 Activist Reflects On The 2019 Student Movement In Indonesia

When young people around the world took to the streets last week to call for action on climate change, thousands of students across Indonesia were marching too.

Like their global peers, haze from forest fires that have turned the sky red in Indonesia was part of their concern. But they were also marching to protest the country’s lawmakers and government, whom they believe to be jeopardising democracy.

Democracy was won in Indonesia 20 years ago, in 1998, after a student movement, which I took part in, put pressure on Soeharto’s three-decade rule.

The recent student marches began after Indonesia’s President Joko “Jokowi” Widodo, who was recently reelected for a second term, and the country’s lawmakers surprised the public by speedily revising the country’s anti-corruption law. The new law significantly weakens Indonesia’s anti-graft agency tasked to combat corruption in the country.

The country’s current lawmakers, who will end their term this month, planned to pass other controversial laws, including revisions to the criminal code that discriminate against minorities and women.

Students also protested to demand an end to military aggression in Papua. Papua is currently experiencing the largest unrest since the region became part of Indonesia in the late 1960s, with at least 32 people killed.

At least 232 protesters have been injured from police water cannons and tear gas and three students in South Sumatra are in critical condition.

I’m saddened to hear of the casualties, but I am also optimististic about the role of young Indonesians in the future.

Seeing the protests, I was taken back to more than two decades ago, when I was head of the Student Executive Board at the Faculty of Social and Political Sciences at the Gadjah Mada University in Yogyakarta.

I was one of the coordinators of the student movement at the university. Yogyakarta, along with other cities, had the same demand: that the dictator Soeharto step down.

Now I am a lecturer in politics and government at the UGM Faculty of Social and Political Sciences. I have noted several important things from the student movements 20 years ago, and those happening today.

They are similar in spirit: calling out incompetent rulers.

One enemy vs many

In 1998, we had one cause. We demanded Soeharto and his cronies to step down.

But the issues raised by the 2019 generation are multidimensional. Starting from those related to governance (the anti-graft law); protection of the weakest minority groups namely women and poor people (the criminal code bill, and anti-sexual violence bill); issues related to natural resources (the land bill, natural resources bill and mineral and coal bill.

Various political and economic actors have interests in these issues. And they also try to shape public opinion. This may result in fragmentation among civil society, including students.

So for the 2019 generation, it will be much more difficult to find common ground or common interest that can unite all groups against a shared enemy.

The enemies of the 2019 generation are numerous, and they include their seniors – the ‘98 activists – many of whom hold strategic positions in state institutions and political parties, and some of whom are merely pundits.

In our coordination meetings in 1998, we were only concerned with how to deal with repressive measures by security forces. We were often terrorised by rumours that hundreds of soldiers were on their way from Jakarta to dispel our actions.

The issues carried by the 2019 generation are more grounded and relatable. For example, they refused the criminal code bill because one of the articles that fines women walking around at night would threaten their generation and workers who would often come back from work late at night.

In the past, the army and our parents were the two parties we feared the most. The army would beat us and chase us to campus. The parents would call and tell us softly to focus on college. Now, some parents perhaps still send messages to their children. But the role of the army has been replaced by the police.

Social media and technology is responsible for the rapid speed with which the recent student movement organised itself. The 2019 generation coordinate, disseminate information, and even fundraise to support demonstrations through social media. 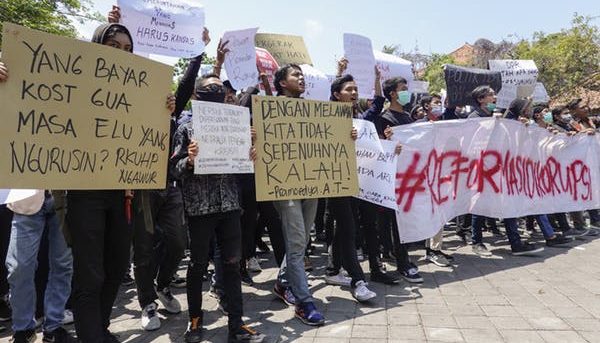 Students in Denpasar, Bali rallied on September 24, 2019. Made Nagi/EPA

In 1998, the available communication tools were land lines and public telephones. So it took us weeks to coordinate rallies. The absence of such communication tools and social media made it difficult for the 1998 student movement to be inclusive, and embrace all the diverse elements.

There are at least three important lessons I am taking from the current movement.

Second, the protesters are being themselves and being joyous during rallies.

The 2019 generation is different from the brooding and sensitive 1998 generation. They has a good sense of humour. Maybe it was because we were always afraid of being chased by the army and pressured by college officials, or felt frustrated because it was difficult to get fellow students to join the action. Our placards were very serious and authoritative. For us, writing eccentric banners betrayed the struggle.

But the atmosphere of the action in Yogyakarta last Monday was full of excitement. Likewise, in other cities, before the police started to beat and chase protesters.

Third, it’s important to continue optimising social media platforms as a means to build an inclusive and broad movement. The utilisation of technology is one of the keys to the smooth consolidation of the current student movement.

The more support, the better. Creative work by producing various hashtags such as #SemuaBisaKena will strongly support the movement.

The 2019 generation is inspiring. We have a lot to learn from them.