Volunteers report that the rate of pretrial release has nearly doubled, but further changes are needed to end the unjust incarceration of legally innocent people.

Last fall, the Coalition to End Money Bond organized more than 70 volunteers to monitor the implementation of General Order 18.8A in Cook County’s central bond court. The order aims to ensure that no one is incarcerated at Cook County Jail simply because they are unable to pay a monetary bond. Today, the Coalition to End Money Bond released its findings in the new report: Monitoring Cook County’s Central Bond Court: A Community Courtwatching Initiative. The information collected in the courtwatching report shows that some positive changes have occurred as a result of recent reforms but that the order has not met its goal.

Coalition courtwatchers found that the use of money bonds decreased by 48% after the order went into effect, but nearly half of all money bonds issued were still in amounts above what the accused person could afford to pay. The report also compares results across different judges and used information obtained by FOIA to track changes in the number of people in Cook County Jail following the order’s implementation.

As part of the effort in providing public accountability, the Coalition has published all of its data on jail population and Central Bond Court outcomes on ChicagoDataCollaborative.org. The website will host raw data captured by the courtwatchers, as well as jail population data and daily Central Bond Court outcomes obtained through FOIA requests.

The Order, while full of potential, is limited in execution because court watchers found that some individual judges are largely ignoring it. When General Order 18.8A went into effect in September, Chief Judge Evans brought in six new judges to Cook County’s central bond court to implement reforms. Courtwatchers witnessed a wide variance in the implementation of the order by judge. Some judges have accurately interpreted and implemented the order by releasing people on their own recognizance with I-bonds or affordable money bonds; other judges have continued to set bonds far beyond what people had said they could afford to pay.

“Entering central bond court is like playing a game of roulette. Whether or not a person will receive a bond in accordance with the law is largely dependent upon which judge they happen to find themselves in front of. If a bond is being set, that means that person has been cleared for release by the court. In theory, bond is supposed to act as an assurance that someone will come back to court—it’s not supposed to be the difference between walking free and being locked in a cage,” said Irene Romulo, Director of Advocacy for Chicago Community Bond Fund.

In the first three months after the order went into effect, Cook County’s jail population dropped by more than 1,400 people. That gradual decrease stalled out in January, and the jail’s population has now remained close to 6,100 people for more than two months. Right now, five months after General Order 18.8A went into effect, approximately half of all people incarcerated at Cook County Jail are still there only because they cannot afford to pay a monetary bond. This flatlining is due to judges in both bond court and criminal courtrooms across Cook County disregarding Chief Judge Evans’ order.

“Money bond adds no value to the pretrial justice system, but rather facilitates the incarceration of legally innocent people for no other reason than their lack of money. Men and women, the vast majority of whom are black and brown, are losing their jobs, homes, children, and more. It is a moral travesty! We are committed to continue advocating for the full implementation of Judge Evans’ order, “ said Daryle Brown, an organizer with The Next Movement. 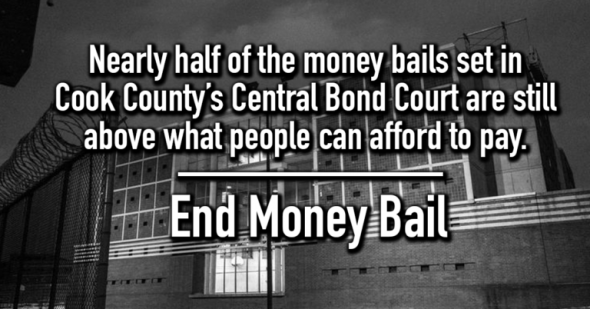