Above Photo: SCREENSHOT VIA FACEBOOK. Sgt. Robert Stamm posted a photo to Facebook last month overlaid with the logo of the Asatru Folk Assembly, which is designated as a hate group by the Southern Poverty Law Center.

A Virginia police sergeant has been suspended after his apparent affinity for a neo-pagan white nationalist group was exposed by local anti-fascist activists.

Sgt. Robert Stamm, 36, was placed on paid administrative leave Wednesday, according to a statement from the Virginia Division of Capitol Police, the law enforcement agency tasked with policing the state Capitol grounds in Richmond.

The department said it was “made aware early Wednesday of a possible violation of division policy” by Stamm. A Virginia Capitol Police spokesman, Joe McKenna, wouldn’t elaborate on what policy Stamm may have violated but did say the decision to suspend him was made “after we discovered some social media posts this morning.”

SPLC research analyst Keegan Hankes told HuffPost that the Asatru Folk Assembly is part of the “neo-Volkisch” movement, which “casts modern ethnocentric bigotries through the symbolism and mythologies derived from pre-Christian Norse and Germanic belief systems.”

“The SPLC designated AFA as a hate group because of their indulgence of myths of genetic purity, that race has a founding in biology; and because of its connections to the so-called alt-right and racist skinhead movements,” Hankes said.

In 2016, two men who practiced the Asatru faith were sentenced in a plot to bomb black churches and Jewish synagogues in the Richmond area.

Twice on Facebook last month, Stamm posted photos of himself overlaid with the logo of the AFA. 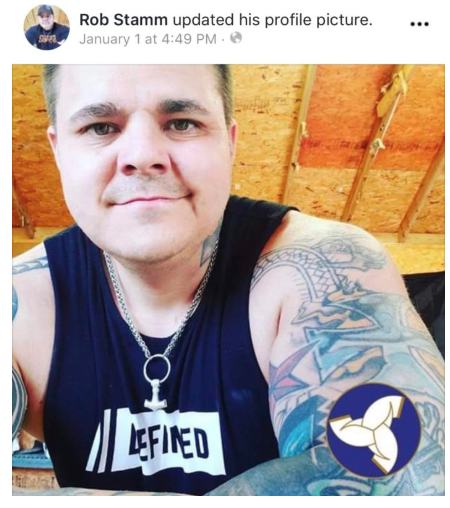 SCREENSHOT VIA FACEBOOK
Sgt. Robert Stamm posted a photo to Facebook last month overlaid with the logo of the Asatru Folk Assembly, which is designated as a hate group by the Southern Poverty Law Center.

Stamm, who couldn’t be reached for comment, appeared to delete his Facebook page Wednesday. According to screenshots made by the Richmond anti-fascists, he was “friends” on the site with multiple people who claim to be affiliated with the AFA, including one of the group’s leaders, Matthew Flavel.

“The Asatru Folk Assembly does not give out the names of our church membership,” Flavel told HuffPost via Facebook messenger when asked if Stamm is an AFA member. Flavel holds the high rank of “Alsherjargothi” (chieftain of the people) in the AFA church.

“The Asatru Folk Assembly would be deeply saddened were this officer to be persecuted based on his religious preference of baseless assumptions about his free associations,” Flavel said.

The anti-fascist report also includes photographs showing Stamm with tattoos that could be interpreted as white nationalist.

In a photo the anti-fascists say Stamm posted online in 2012, he can be seen with what appears to be a “wolfsangel” tattoo on his neck. The wolfsangel — an ancient runic symbol used as the insignia for German Nazi divisions in World War II — is a common tattoo among neo-Nazis.

More recent photos of Stamm show that he appeared to cover up the wolfsangel tattoo with a drawing of an anchor.

Other photos show Stamm sporting an “Iron Cross” tattoo and a Nordic rune tattoo. “While these tattoo designs do not necessarily connote nazism or white supremacy in every use, in combination with his other ties, Stamm’s affinity for these symbols seems to go beyond aesthetics or heritage,” the anti-fascists argued in their report.

Another Facebook photo shows Stamm lifting weights in front of a “Wirmer Flag,” a German nationalist flag co-opted by the modern far-right in Germany, most notably by the anti-Muslim hate group Pegida.

According to the anti-fascist report, Stamm “liked” the Facebook page “This Is Europa,” which describes itself as a “pro-European community and think tank,” and regularly shares false and fearmongering posts about Muslims. He also “liked” “Stop Farm Attacks & Murders in South Africa,” a Facebook page devoted to the white nationalist conspiracy theory that there is a “white genocide” underway in South Africa.

The anti-fascist activists say they spotted Stamm last weekend while he was policing protests at the state Capitol calling for the resignation of Virginia Gov. Ralph Northam, whose medical school yearbook page was revealed to include a photo of a man in blackface and another man in a Ku Klux Klan costume.

Like many anti-fascist activists, who often fear retaliation for their political beliefs, the Richmond-area anti-fascists and anarchists behind the Stamm report have not identified themselves. They emphasized in a statement to HuffPost that they will continue to expose the white supremacy of police:

“While we believe policing is, inherently, a white supremacist institution, when the cops are so bold as to make their allegiances open, we seize the opportunity,” they said. “When they tout their allegiance to overtly fascist groups, we name them and expose their ties.”

“Maybe from this exposure, other overt white supremacists will be discouraged from joining law enforcement, where their violence is even more legitimized as state force,” they added.

“We do not want to provide nazi cops with paid vacation. But one less pig on the streets is one less murderer patrolling around flashing their badge and gun.”