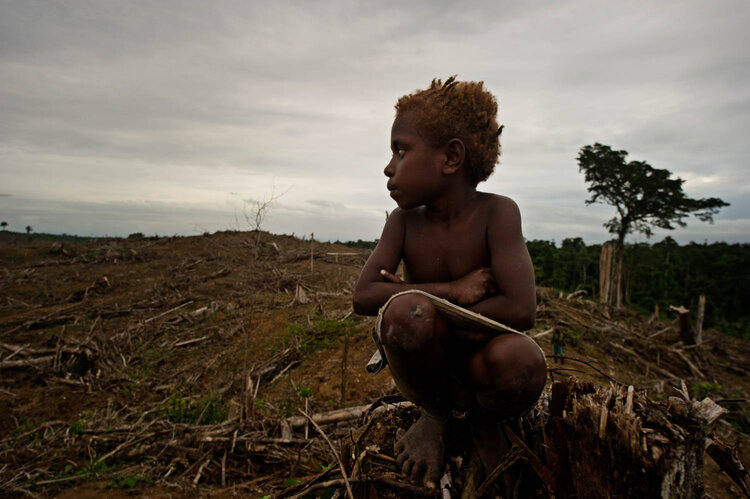 Above Photo: At least 56 political prisoners are currently detained across the territory of West Papua. Getty Images.

West Papuans are combining their struggle against Indonesian occupation with the fight against ecological destruction.

And pointing the way towards a radical green future.

The Indonesian state has dominated West Papua with military force since 1962. West Papua is the western half of the island of New Guinea, situated immediately north of Australia. The Netherlands colonized the territory during the nineteenth century. As the Dutch began to decolonize during the 1950s, they prepared West Papua for independence. This came, briefly, at the end of 1961. Shortly after, Indonesia invaded in 1962. This began an enduring occupation predicated on political repression, cultural destruction, and colonial genocide.

It has also resulted in environmental devastation locally and globally, but West Papuans are fighting back with a new vision for a free Green State launched during COP26.

Political repression in West Papua is such that support for independence is brutally punished, including up for the 16 years in prison for the ‘treasonous’ act of raising the Morning Star flag (West Papua’s symbol of independence). Prominent leaders of the liberation movements have been imprisoned, and there are currently at least 56 political prisoners detained across the territory. Extrajudicial assassinations have been frequent and international media and monitoring groups are banned.

Cultural destruction has included the criminalization of West Papuan culture such as growing dreadlocks. West Papuans are displaced from their land and forced into government-controlled ‘villages’. The Indonesian state has propagated an underlying anti-black racism against West Papuans with protests erupting in 2019 in response to racial violence by the police. The treatment of West Papuans has been labelled as genocide by the Free West Papua Campaign and the United Liberation Movement for West Papua (ULMWP), backed up by academic studies including one from Yale Law School in 2004. Indonesian security forces have massacred villages, used torture against the indigenous population, and used rape as an instrument of intimidation.

What is the purpose of this enduring colonial violence? A primary function is to open up West Papua to corporations plundering the territory of natural resources. Mining, deforestation, and oil and gas extraction drive injustice for the indigenous population while contributing to global environmental breakdown too. International capital profits from this destruction and the Indonesian state reaps its own benefits through tax revenues.

Freeport is a US-owned company operating one of the world’s largest gold mines and the third largest copper reserve in West Papua. It is one of the world’s largest polluters of industrial waste including dumping around 300,000 tons of waste into local river systems every day. Deforestation in West Papua continues to increase with palm oil plantations as a major driver. One mega-plantation is almost twice the size of Greater London.

When it comes to oil and gas, household name and climate criminal BP is a major perpetrator. The fossil fuel company operates a gas field in Bintuni Bay which was previously a remote area of rainforest and mangrove forest. Today, it is an industrial site extracting its 14.4 trillion cubic feet of liquified gas (which contains the especially potent methane).

All of this extraction is conducted without the consent of indigenous populations and capital’s profits are facilitated by the most violent forces of the Indonesian state. Military and security forces receive direct payments from fossil fuel and mining companies to brutally repress local opposition.

Vision For A Green State

As with instances of violent, racist repression of freedoms and theft of land conducted throughout history, the colonial occupation of West Papua faces powerful resistance. The struggle to free West Papua is locally strong and globally distributed.

In 2014, the United Liberation Movement for West Papua (ULMWP) was formed to unite the territory’s three main political independence movements. In 2017, Benny Wenda was elected Chairman of the ULMWP. He currently lives with his family in Oxford having been granted political asylum after fleeing imprisonment by Indonesian authorities in 2002. In 2020, the ULMWP announced the formation of a Provisional Government, with Wenda as interim-president, to achieve the aim of a referendum on independence and to establish the future Republic of West Papua.

Central to this political program is the ambition for a free West Papua to be the world’s first Green State. Core to the vision, launched at COP26 in Glasgow, is the principle that ‘Melanesian tribes in West Papua have proven [themselves] the best guardians of this green New Guinea island and blue Melanesian archipelago.’ The declaration of West Papua as a modern nation-state and a Green State is based on green philosophy, green economics, green development policy, and green life values.

The vision is wide-reaching, resting on a common definition of sustainability as ‘meeting our own needs without compromising the ability of future generations to meet theirs’. It deprioritizes economic growth and ‘development’ in favor of the restoration and protection of the environment while maintaining balance and harmony between people and environment. The vision makes central efforts to combat climate change, including targeting gas, mining, logging, and palm oil plantations while providing assistance to other countries in the Pacific. It plans to make Ecocide a criminal offence and pledges to push for its prosecution at the International Criminal Court.

Counter to the imposition of corporate power through colonial occupation, the vision for a Green State balances modern democratic institutions with a community-based approach to decision-making which devolves guardianship of lands, forests, waters, and natural environments. It affirms the importance of indigenous knowledge and customary values and norms for managing nature. Significantly, the vision draws vital connections between ecological stewardship and social justice. It includes independent institutions and mechanisms to guard against corruption and abuse of power, including by state apparatuses such as the police and military. It includes provisions to guarantee human rights as well as free education and healthcare.

What makes the ULMWP’s vision for a Green State so compelling is that it is neither a total retreat from modern society nor an embrace of the capitalist political economy which has produced so much social and ecological injustice in West Papua and globally. It balances the need for modern political institutions with an economy functioning in harmony with the environment and stewarded by the indigenous population. For very many people around the world, this vision will offer inspiration in their own struggles for meaningful self-determination, environmental justice and shared prosperity.

The Left Must Support A Green State Of West Papua

We must be clear that self-determination is an absolute pre-condition for this vision. The Green State is only possible when West Papua achieves freedom from Indonesia’s occupation which itself receives political and material support from the UK, US and other Western states. The UK, for example, funds and trains the Indonesian elite special forces. Companies like BP are domiciled in the UK and given free rein to act with impunity internationally.

As the ULMWP steps up its struggle for independence, tying it explicitly to the struggle for environmental justice, we on the British Left and in the climate movement have a responsibility to step up our own solidarity with West Papuans. The scale of deforestation and extraction means that freedom for West Papua must be a key priority for those fighting for climate justice.

Through our proximity to our government and corporations, we can exert influence to demand an end to military support for the occupation as well as BP’s involvement. We can give generously to the Free West Papua Campaign and include West Papuan voices on our platforms. We can organize for greater political support. Labour’s 2019 manifesto, for example, pledged to ‘uphold the human rights of the people of West Papua’. We can push to solidify this principle within our labor movement and push it even further.

The launch of this vision for a Green State will surely further inspire West Papuans to keep fighting for freedom. It can further inspire many around the world to maintain the struggle for environmental and indigenous justice. On the Left and in the climate movement, we should also take it as inspiration to commit our solidarity to this struggle along with all others standing for freedom against the violence of colonial states and plunder of international capital.