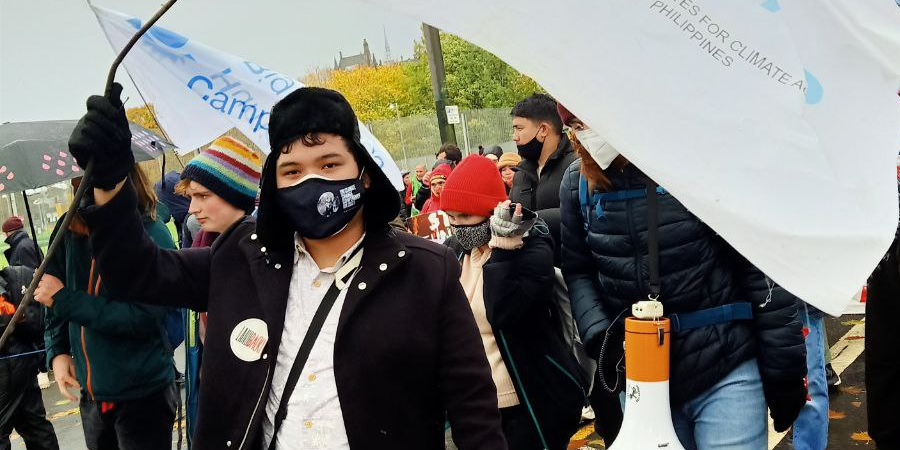 COP26: On The Outside, Always Looking In

Above Photo: Chito Arceo, delegate to the recently-concluded Conference of Parties 26 (COP 26) UN climate summit in Glasgow, who represented YACAP alongside two others.

As the first-ever person from my city to attend the biggest summit in the world about climate change, the hype was real. My friends and family were very much eager to see what would happen in the most anticipated COP since COP21, and the local government gave me their full support to report back the important things that could be echoed back to my community. Unfortunately, my disappointment was even bigger than I thought imaginable, and this COP turned out to be quite uneventful on my part.

Coming into the Blue Zone (the area where the official negotiations took place) for the first time and seeing the giant globe suspended from the ceiling, I was full of excitement. I had gone through security, I had finished registering to get my badge, and I had gotten my travel pass amongst other things they gave away. But the excitement quickly ended when I realized that I didn’t have the slightest idea on what to do next. The events were happening quickly with only televisions to remind us of our schedule. The venue itself was way too big to just look around and find an event that interested me without tiring myself too quickly. Simply put, I was lost.

This feeling would not only happen on my first day at COP. It also happened on my second day, and my third, up until the very last day. Every time I entered the Blue Zone, I realized I had no idea what to do aside from the pre-planned actions by my fellow activists. It was simply too overwhelming to navigate through the conference. But what’s ironic is that so much is happening and yet, so little was achieved. The whole thing felt like a farce.

It wasn’t long until I realized why this was the case: even if I came from a country that is continuously being ravaged by the climate crisis, I wasn’t the target audience of this conference. I wasn’t white, I did not come from a position of power or wealth, and I wasn’t significant enough to be let inside the negotiations. I did not belong in this theater of performative climate “action”. So much for COP26 being the most inclusive COP ever.

How can a summit organized by the most powerful entities in the world solve a crisis disproportionately affecting billions of people from marginalized communities without giving them the platform to be at the negotiations? Or at the very least, not giving them the platform to speak? Why do those who feel the effects of the climate crisis the least get to decide about how we move forward from now on? What do they know of the crisis when all they care about is how they will profit from this situation?

Climate finance is a sham and net zero is a scam. World leaders and fossil fuel lobbyists should know that their tainted money is not worth the lives of the people suffering from the crisis. Every single day that they try to move the deadline to end their emissions will be responsible for the death of thousands of people, if not millions.

Every single day that they try to move the deadline to end their emissions will be responsible for the death of thousands of people, if not millions.

Holding large-scale polluters accountable and demanding reparations for the loss and damages of the climate crisis are what we should be doing right now. COP26 was clearly not the platform for these actions, and as far as I’m concerned, the future COPs won’t be as well. The system is on their side, and not a day has passed that they do not try to take advantage of this for their financial gain.

All of the events that actually mattered during my two-week stay in Scotland either happened outside COP or inside COP but outside of the negotiations themselves. These actions planned by the civil society organizations highlighted the voices of MAPA (Most Affected People’s and Areas) activists and the voices of those from marginalized communities that did not get the representation they needed inside the conference itself. These are where the power of the people comes from. These platforms shed light on the real issues brought about by the climate crisis, and they are the ones that should be broadcasted around the world.

It would be amiss to exclude from this reflection the admiration I have amongst my fellow activists who came from different parts of the world. Their sheer determination and passion for the advocacies that they are fighting for are beyond remarkable. I had the privilege of getting to know first-hand the experiences of these people from their home countries and why they came to Scotland to raise their voices. There is a tragic irony in knowing that a shared aversion to the lack of climate action is what united us in the first place. However, there is hope in knowing that these activists, who are all incredible in their own right, will push for true climate justice in their own communities no matter what it takes.

Lastly, COP26 lacked what I think is an important part of solving the climate crisis: love. Whether it be love for the environment or love for the causes the people are there for, it was clear that this summit was born out of obligation and not of altruism. This resulted into a conference that was monumental at face value, but lifeless in form.

Conversely, the actions outside of COP were full of emotion —anger, disappointment, sadness, hope, and of course, love. Every single activist I’ve met had a love for what they were doing. Not because they loved what was happening, but because they loved what they were fighting for. And they were more than willing to share that emotion with others. Never have I felt so attached to a group of people that I have never met in my life in just a span of two weeks. I am forever grateful for the love that they have shared with me, and I hope that they continue to inspire other people with their fervor.

When I came back to the Philippines, it was not the stories inside the conference that resonated with me. It was the stories of unity that kept us going in these past few weeks despite the lack of action from the world leaders and negotiators in COP26. While not the conference I thought it to be, it has managed to give me outlooks that I never would’ve realized had it not been for the incompetence and the exclusionary vibe of the event itself. You have to be outside looking in to get the entire picture of COP. And the picture it depicts manages to capture a few words: we will not solve the climate crisis through COP26, and we won’t be solving it through the future COPs as well.