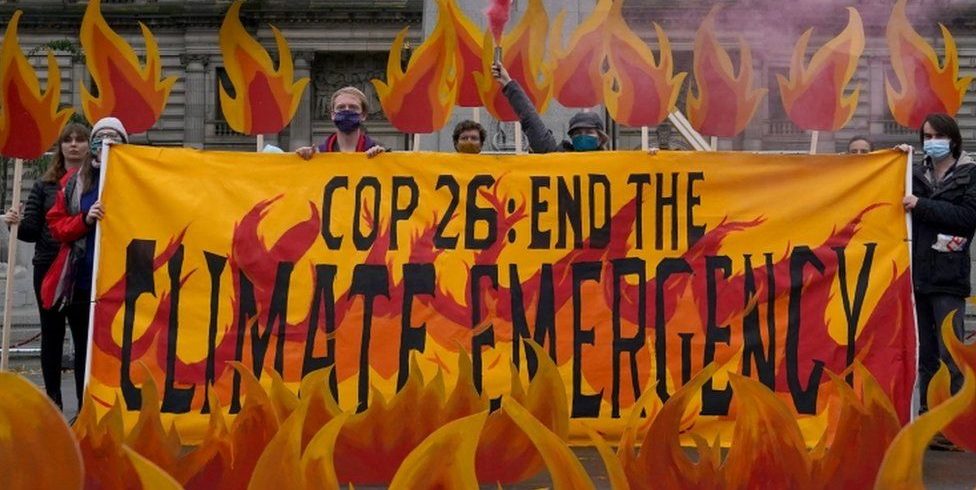 COP26 Will Showcase False Solutions That Protect Corporate Profits, Not The Planet

The COP 26 United Nations climate meeting is underway in Glasgow Scotland. Following the Intergovernmental Panel on Climate Change’s recent “Code Red” report that proves urgent action is critical, the world is looking at the corporate-dominated COP 26 to do what is necessary. Clearing the FOG speaks with Anne Petermann, executive director of the Global Justice Ecology Project, who says COP 26 is focused on ‘false solutions’ promoted by large corporations to protect their profits instead of the planet. Petermann describes a new publication, “Hoodwinked in the Hothouse,” that explains what these false solutions are and what is necessary, the real solutions. She also discusses what people can do to save the planet.

Anne Petermann is the Executive Director of Global Justice Ecology Project and Coordinator of the Campaign to STOP GE Trees. She became involved in environmental issues while in college, where she studied wildlife biology and fine art. On Columbus Day in 1992, Petermann was arrested for the first time at an action commemorating 500 years of genocide in the Americas.

She co-founded the Eastern North American Resource Center of the Native Forest Network in June 1993, acting as its Coordinator until 2003. In the summer of 1993 she participated in an expedition to James Bay, Quebec to document the Cree resistance to the plans of Hydro-Quebec to dam a series of rivers in Cree territory. (NFN played a key role in a Vermont campaign on the issue, including organizing an international day of action against Hydro-Quebec on their 50th anniversary in April 1994. These efforts contributed to Hydro-Quebec abandoning its plans to build new dams in Cree territory.)

Petermann also co-organized the First North American Temperate Forest Conference in November of 1993. This conference included over 500 forest activists from across North America as well as indigenous representatives from six nations. The conference was organized to build bridges between these communities of activists and encourage greater collaboration. Dr. David Suzuki and Winona LaDuke were the keynote speakers.

From 1994 to 1999, Petermann organized NFN’s annual Forest Activist Training Weeks in Vermont where dozens of activists were trained in skills ranging from working with the media to fundraising to orienteering.

In 1996-1997 Petermann coordinated NFN’s involvement in a statewide campaign to stop timber corporations Champion International and Boise Cascade from spraying toxic herbicides on their Vermont forest holdings. NFN’s participation in organizing direct actions and protests on the issue was instrumental in the state of Vermont passing a moratorium on the herbicide spraying in early 1997. Subsequent to this decision, Champion International and Boise Cascade both left the state and the moratorium became permanent.

In October 1999 Petermann co-organized actions at the ministerial meeting of the Free Trade Area of the Americas in Toronto, where she hung a 600 square foot banner against the FTAA on the Toronto Convention Center where the Ministers were meeting.

In January of 2000, Petermann was arrested at the NH Democratic Campaign headquarters of Al Gore during an action in support of the U’Wa people of Colombia whose land was under threat from Occidental Petroleum. The U’Wa had threatened mass suicide if Occidental drilled on their land. Al Gore’s father had served on the Board of Occidental Petroleum and Gore himself held large quantities of stock. This action was covered nationally and triggered other such actions across the country. Occidental did not drill on the U’Wa lands.

From May 2000 to May 2001 Anne won a scholarship from the New England Grassroots Environment Fund to take part in a year-long fundraising course called The Complete Fundraiser, held by the Institute for Conservation Leadership.

In June of 2000 Petermann helped launch the first campaign against genetically engineered trees with a press conference in Boston during protests countering the Biotechnology Industry Organization’s annual conference. The press conference was covered on the front page of the Washington Post.

In July 2001 Petermann co-organized the first ever protest against GE trees at an International Union of Forest Research Organizations “Tree Biotechnology” conference in Oregon. That same month she edited and co-wrote a major groundbreaking report on GE trees entitled, “From Native Forest to Franken-Trees, the Global Threat of Genetically Engineered Trees,” which was distributed to thousands of people.

In September of 2001 Petermann co-founded a new organization, Action for Social & Ecological Justice, which took over the role previously played by Native Forest Network Eastern North America, and which was founded in response to the broadening focus of the resource center to include more Latin American and social justice issues. She served as the organization’s Development Director, fundraising for the organization and producing its publications.

In September 2003, Petermann co-founded Global Justice Ecology Project. In November 2003, she participated in and documented the mobilization against the Free Trade Area of the Americas in Miami, which was brutally attacked by police. In 2004 she participated in and documented the protests at the Democratic National Convention in Boston and the Republican National Convention in New York City, as well as anti-war marches in Washington, DC. Her photo from a massive women’s march in DC was used for the cover of Z Magazine.

In January of 2004 Petermann co-founded the STOP GE Trees Campaign, helping pull together a meeting with numerous groups from across the country to take unified action to stop the commercialization of genetically engineered trees.

In April 2004 Petermann spoke on the dangers of GE trees at the UN Forum on Forests in Geneva, Switzerland. She has since spoken on GE trees at UN events including the Framework Convention on Climate Change, the Cartegena Protocol on Biosafety and the Convention on Biological Diversity (CBD) at locations around the world. In 2006 she helped organize an effort at the UN CBD Conference of the Parties in Curitiba, Brazil that won an historic decision on GE trees from the UN CBD that warned countries of the dangers of GE trees and urged them to use a precautionary approach. In 2008 at the CBD Conference in Bonn, that decision was strengthened after Petermann co-led a campaign that won support from every NGO and Indigenous Peoples’ Organization, plus the entire African delegation for a suspension of all plantings of genetically engineered trees.

In October 2004 Petermann traveled to Durban, South Africa where she co-founded The Durban Group for Climate Justice which denounces carbon trading as a false solution to global warming.

In 2004 Langelle and Petermann formed a partnership with the indigenous Mapuche group Konapewman in Temuco, Chile, to work jointly to stop the commercial development of GE trees in Chile.

Anne’s writing has been featured in Z Magazine, Earth Island Journal and Seedling, among numerous others. She has been interviewed for print, radio and television from the Le Monde, to The Washington Post to NPR stations in Maine, North Carolina and Georgia as well as hundreds of other media outlets.

She has also presented the dangers of GE trees at dozens of meetings, conferences and events across the US, including two industry conferences, the Landscapes, Genomics and Transgenic Conifers Conference at Duke University in November 2004 and the Sustainable Forest Management with Fast Growing Plantations conference which was sponsored by the International Union of Forest Research Organizations, the US Forest Service and ArborGen in Charleston, SC in October 2006. She has also presented at meetings in Brazil organized by Brazilian networks including the MST (Landless Workers’ Movement) and Via Campesina.

In 2013 Petermann helped relaunch the Campaign to STOP GE Trees with a new steering committee consisting of leaders in the global forest protection, bioenergy, Indigenous rights and radical activism communities.

In 2000, Anne received the national Wild Nature award for environmental activist of the year.

In 2002, the Burlington, VT resource center was awarded the highest honor of the Green Mountain Fund for Popular Struggle.

Anne also sits on the Board of the Will Miller Social Justice Lecture Series.