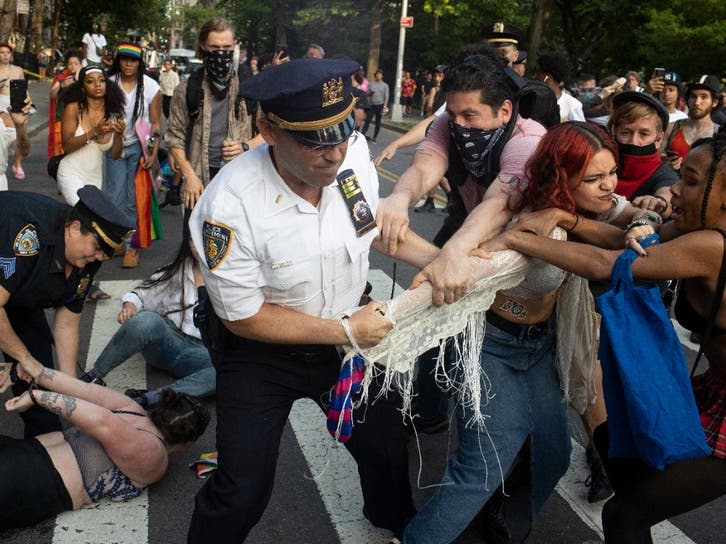 Cops Brutalize And Arrest Queer Marchers On Anniversary Of Stonewall

We must fight for the charges to be dropped, against the racist police and for the right to free, public space.

Just one day before the 52nd anniversary of the Stonewall uprising, a riot against the police led by trans women of color, New York City cops brutalized and arrested marchers as well as a street vendor.

Journalist Janus Rose told Gothamist, “The park was packed and people were just hanging out and having a good time after the Queer Liberation March. Then all of a sudden we started seeing dozens of police vans circle around the park with their sirens and lights flashing, pedal to the metal.”

Videos on Twitter show swarms of police in riot gear surrounding the park. Some officers pepper-sprayed people who were merely standing around.

NYPD threatening to arrest one for unlawfully blocking sidewalk pic.twitter.com/jzN5wVmlcF

Four people were charged with disorderly conduct, and four more with resisting arrest, obstructing administration, and criminal possession of a weapon.

This just highlights that 52 years after the Stonewall uprising, the police remain a racist force of repression against the most marginalized amongst us. It proves that even though they now drape themselves in rainbow flags and even “apologize” for the brutality shown at Stonewall in 1969, they are the same racist, brutal force that they have always been. But times have changed. The police don’t repress wealthy, white gay men at expensive parties — they repress working-class queer people of color crowded in the streets, and the unhoused people who spend time in the park. In a city with more empty apartments than unhoused people, the capitalist state still pretends that it’s impossible to provide housing for those who need it. We call bullshit.

In the past few weeks Washington Square Park has become the center of protests. As youth of color, activists, and unhoused folks attempt to enjoy the free public space, the police have increasingly begun to repress, arrest, and brutalize the people in the park. This is part of the continued gentrification of the West Village at large — the wealthy people in the neighborhood don’t want to see unhoused people or radical youth outside their doorstep or expensive bars.

The NYPD already announced a 10 p.m. curfew for the park in order to justify their repression against the many people — mostly people of color — who hang out there. But on Sunday, thousands of people broke curfew in an act of joyous defiance. But this is not enough.