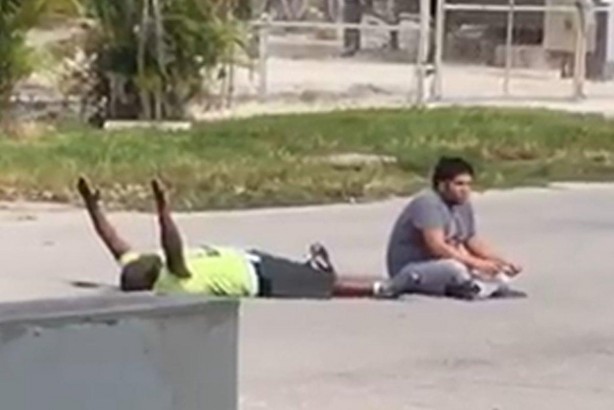 Cops Get Less Training Than Cosmetologists In The US

Above Photo: Poorly trained officers will aim guns at autistic patients and shoot their therapists instead. (HILTON NAPOLEON II)

Today is Part 2 in a five-week, 25-part series exploring solutions for police brutality in America. Part 1 can be found here. The problem of police brutality is actually deeply entrenched and amazingly complicated. It has no quick fixes. No one solution will solve the problem. Instead, it must be tackled from dozens of different angles, but as a part of one comprehensive plan. This series will lay out that plan with reasonable, achievable solutions that will drastically reduce police brutality in this generation.

The problems that produce police brutality start long before a trigger is pulled or a chokehold is applied. In Part 1 of this series I addressed the overwhelming whiteness that dominates our justice system and the problems this racial and cultural imbalance causes.

I will admit that I absolutely assumed police officers were required to complete much more training than cosmetologists. Nobody told me this was the case. It just seemed reasonable that the people who do hair, makeup and nails wouldn’t be required to train nearly as much as the armed law enforcement officers who have the power to arrest and use lethal force against us.

Speaking with the Daily News, former police officer Randy Shrewsberry said, “On average, state basic police training is 622 hours with no required apprenticeship. Of course there is some time with a Field Training Officer — which is not mandated in most states and is fully subjective to the employing department.

“Conversely, the basic training requirements for cosmetologists is 1,570 hours, with an average of 1,080 mandated apprenticeship hours with a total of 2,650 required hours — and that’s just the average. Additional research shows that there is little to no requirement of continued education for police officers. Those states that do mandate continued education it is usually in the ballpark of 40 hours per year.”

When you dig in to the numbers, the facts are shocking.

In fact, almost every state in America requires more training to do hair and nails than it does to enforce law and order.

In the video above, LAPD Captain Peter Whittingham visited Finland, Sweden and Norway to study police practices there. To say what he found was mind-blowing would be an understatement.

Right away, Whittingham discovered police officers in Nordic countries are required to receive at least two full years of nonstop, university-style classroom training before they become officers. In California, police are required to complete 833 hours (that’s 21 weeks) of training. That’s on the longer side for most states in America, but wouldn’t even equal a single semester of the 104 weeks required in Norway.

Furthermore, entire police departments in places like Sweden and Norway can often go several years without firing a single bullet. Yet, in spite of the reality that they use lethal force exponentially less than America police, they are still trained exponentially more.

This could explain how a North Miami police officer, claiming he was intending to shoot an unarmed autistic patient, accidentally shot his behavioral therapist instead — despite firing three bullets. Let’s recap that. An America police officer claimed he fired his gun three times at a harmless autistic man holding a toy truck, missed him all three times, but shot Charles Kinsey, his therapist, instead.

The answer to this crisis is not to reduce the training required by cosmetologists, but to drastically overhaul the state training requirements of American police officers. If a federal requirement could not be put in place, a 50-state campaign needs to happen to make sure our police officers are required to train at least as much as makeup artists, but preferably more.

Because so little classroom time is required of American police officers, much of what they learn is on-the-job training.

Theoretically, this may not sound harmful, but if police departments already have bad practices in place, and officers are learning more on the job than they are in the classroom, what they learn from their colleagues will reign supreme. If we are to change the culture of American policing and create safer environments for police and citizens, the length of training they receive must drastically increase.

In future parts in this series we will discuss what must happen in this training and discuss what would happen if police departments required college degrees.