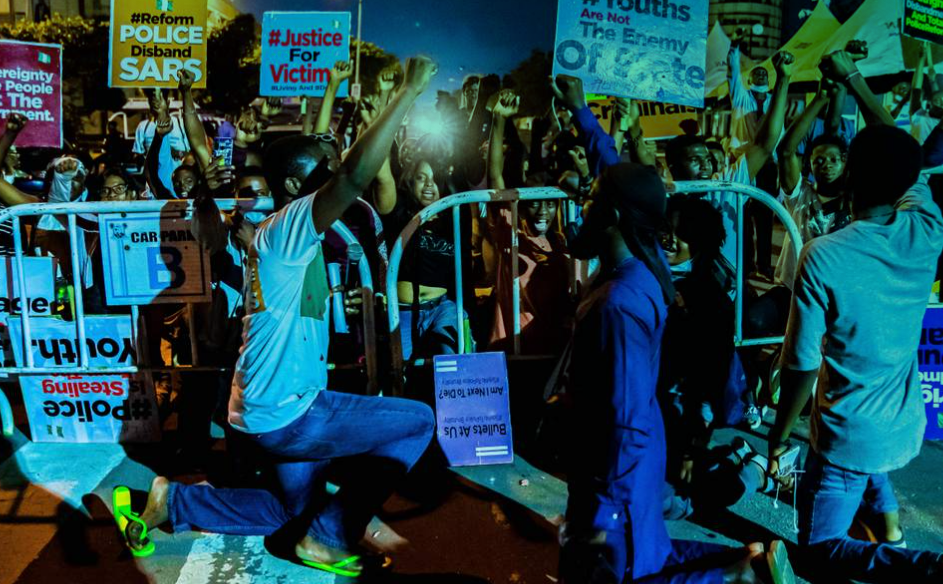 CORE Nigeria: “We Will Fight For Our Total Liberation”

Baba Aye of the Coalition for Revolution (CORE) calls for a people’s uprising against an illegitimate regime in Nigeria.

“The struggle now unfolding will be turbulent. But united and determined, the people will win.”

Nigeria – On 3 October, a young man was killed by the police in Ughelli, a town in the Niger Delta region of Nigeria. A video of this incidence was circulated by residents of the city on WhatsApp and also posted on Twitter. This sparked the #EndSARS revolt of youths in the country, which was drowned in blood with the massacre of at least 36 people on 20 October. The bulk of these was at the Lekki tollgate, in Lagos state – one of the two main centres of the uprising in that mega-city where one-tenth of the country’s population resides.

Nigeria is the most populous country on the African continent, with just over two hundred million inhabitants. The country was under military rule for thirty of its first forty years of independence, throughout the 20th century. The republic was reinstated in 1999. But there even civil rule has been marked with militarization. The two longest-serving presidents, including Mr Muhammadu Buhari who is currently on the saddle are retired Generals who ruled at different times as heads of military juntas in the 1970s & 1980s.

Police brutality has been an accompanying element of the militarization of politics and social life, along with a strong clientelist trend of administration. The most dreaded unit of the police is the Special Anti-Robbery Squad (SARS). In a 2016 Amnesty International report, its sheer brutality, use of torture to extract “confessions” and strings of extra-judicial killings was documented.

The 3 October killing however took place within a context of increasing economic deprivation and political radicalisation largely spurred by the Coalition for Revolution (CORE) in taking to the streets to protest, since the coalition, which is aligned with Africa Action Congress – a radical party – launched its #RevolutionNow campaign on 5 August 2019.

The #EndSARS protest movement was however formally “leaderless”. This was partly because the spontaneous movement took on a non-partisan character. There were also efforts in several quarters within the movement to limit its demands to ending police brutality. But by the second week of the protests, #EndBadGovernanceInNigeria also began trending on the Nigeria blogosphere, where narratives of the movement were shaped.

The state did all it could to break the movement. Protesters were attacked by the police as well as by hired thugs at the behest of the state. With these failing to achieve the aim of ending the spread of protest, a massacre was planned. First, a curfew was declared in Lagos state, a major epicentre (along with Abuja, the country’s administrative capital) of the #EndSARS movement. Before the hour it was into force, soldiers, and police moved in on the Lekki tollgate and the front of the Lagos State House of Assembly at Alausa, the two main spots in the state where thousands of people had peacefully gathered under the Nigerian flag, day and night, to demand an end to police brutality and bad governance.

The Coalition for Revolution condemned this despicable killing, describing it as unacceptable. CORE holds the Nigerian government responsible and insists that every single officer involved in executing this despicable murders and brutalisation must be brought to book. The coalition further saluted the Nigeria Bar Association’s stand to support legal proceedings at all relevant fora against the Nigeria military. And it holds the Lagos state governor Mr Babajide Sanwo-Olu equally culpable in this premeditated massacre and should be held accountable.

The political aim of the government was to buy itself some respite with repression. But that goal was dead on arrival. Despite continued sporadic shootings by security personnel in different parts of Lagos and other states, angry youths have taken over several areas, burning tyres and raising barricades.

These include the Lekki link bridge, Ikorodu township and the Lagos-Ibadan Expressway. The Bola Tinubu-owned TV Continental station was also ransacked by protesters. Our oppressors have sowed the wind of mass suffering and massacre. And now, they start to reap the whirlwind of mass anger.

The regime of Maj. Gen. Muhammadu Buhari (rtd.) has lost all legitimacy and must be forced to abdicate power, CORE insisted. The exploited and oppressed Nigerian masses want and deserve an end to bad governance. We will fight for our total liberation. While the government has been able to restore order, this is at best temporary. The genie of resistance is out of the bottle. The struggle now unfolding will be turbulent. But united and determined, the people will win.

Down with the regime!

Another Nigeria is possible!

Justice for the Lekki Martyrs!

Justice for all victims of police brutality!

The people united can never be defeated!

Baba Aye is a trade union leader and Co-convener of the Coalition for Revolution (CORE).

This article is an expanded version of a press statement issued in the immediate aftermath of the Lekki & Alausa massacre.