We are only as safe from an epidemic as our most vulnerable are. At this time communities across the country are aware of the risks of not practicing the five habits that help to reduce the spread of the coronavirus. We have been encouraged to self-quarantine and many have been “locked down” for weeks. Some people have have expressed solidarity with people in prison as a result. Now that many have become more sensitive to the effects of isolation because of forced quarantine, let’s think about how are (not) people in prison being protected. Understanding that prison health is apart of public health I want to outline the ways that prisoners are not effectively able to protect themselves. 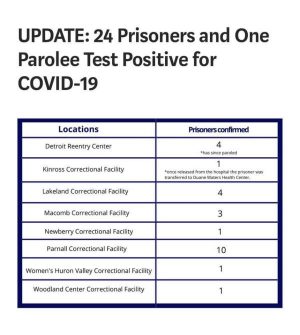 We know that if no one else in the United States, people in prison were safer than the average person on the outside from contracting the virus. Even before many states placed a quarantine on their residents, prison officials put lockdowns in place. On Friday March 13th as I looked for an acceptable outfit to visit Gus Harrison Correctional Facility, I learned that the Michigan Department of Corrections (MDOC) placed an indefinite restriction on all visitation from families and friends all together (talk about bad luck). On that date there were no reported cases in the prison, but anxieties grew as prisoners were unable to see their families, prison staff were free to come in and out of the facility daily. Now there have been 24 reported cases in MDOC, so with the mass public being educated on best practices, what can prisoners do to keep themselves safe in the midst of this growing crisis? 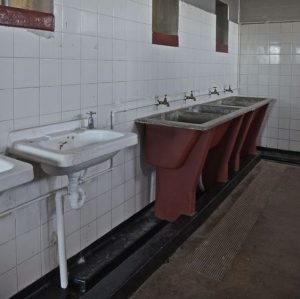 The majority of incarcerated people only have access to community restrooms, meaning that they share their facilities with at least a hundred other people in their unit or dozens of people on their floor and in the midst of the health crisis, access to the restroom is more crowded than usual. While washing one’s hands a prisoner is often within a foot, if not closer, to another prisoner using the washing station on both sides of them.

Though it may seem to some that there are individual steps that people in prison can take to keep themselves safe, we must understand that the conditions of prison are unsafe, unhealthy and inhabitable, ESPECIALLY DURING A HEALTH CRISIS! The best way to protect people, on both sides of the wall is to reduce the number of people in prison. Corrections Departments do not have the ability to respond appropriately to keep people safe in an overcrowded, degraded environment. Along with that, corrections staff are much too focused on punishment then protection and as a result many fail to see the humanity in the populations that they serve. This makes it extremely difficult for prisoners to trust that their best interests are being considered in the midst of the health crisis.

2. Cough into elbow and 3. Don’t touch your face

These are both behaviors that people in prison can practice more easily than any of the other five. While we can tell our individual loved ones to do this, in order for everyone in the facility to be safe we must hold prison staff accountable to sharing this information with every person housed in their facility. With people in prison being limited to only these practices they are negated by their inability to participate in the other three behaviors. A prisoner’s attempt to keep themself healthy is constantly threatened by the lack of cleanliness of the facility overall, lack of distance between others around them and their lack of access to preventative medical care and hygiene products.

Prisons by design are congregate environments. There is no way to consistently keep a safe six foot distance from others around. As a result the practice of washing one’s hands ‘often’, coughing into one’s elbow, and not touching one’s face is negated by their constant close proximity to dozens and dozens of people throughout the day. This includes in the restroom but also the chow hall. While some facilities have reduced the number of people who eat at once, prisoners are still within six feet of each other and kitchen staff (other prisoners) while simply waiting in line for their meals.

On top of this, at the end of a crowded, chaotic day once people are confined to their cell they are no more than three feet away from their bunkie and any have up to seven other adults to share their cell with. Even if a prisoner was able to do everything they could as an individual to keep themself safe, they are still vulnerable to the interactions that their cellie has had throughout the day.

The vast majority of U.S. prisons are dangerously overcrowded, as prison populations have doubled over the last couple decades. Two person cells have evolved into four person cells and many have even increased to eight person cells, not to mention the mass living areas that inmates are housed under in states like California and New York.

Rather than being places of rehabilitation, prisons are obviously functioning majorly as human warehouses that inflict its residents with trauma in dehumanizing conditions where their bodies are stored and oppressed for decades. We’ve seen reform in multiple areas of the prison system as a result of increased public knowledge and public pressure on politicians, but those reforms fall short of being effective during today’s unprecedented crisis. For example, we’ve come to understand the normalized emotional trauma that incarcerated people suffer, so we’ve called for more programing and reduced costs on outside communication. We’ve come to understand the physical and sexual abuse that incarcerated people suffer, so we’ve passed sweeping PREA laws and placed special protections on incarcerated women and children. We’ve even come to understand the normalized psychological trauma that incarcerated people suffer, so many have called for an end to LWOP and solitary confinement.

However, now that the Coronavirus crisis has touched our incarcerated loved ones, we have become acutely aware of the prison’s complete inability to protect the health of and provide effective treatment for people in prison in order to eliminate an outbreak among a population that was safer than the rest of us to begin with. Private prison healthcare providers, like Corizon, have already demonstrated their love for profits over people with mounting lawsuits against them particularly for medical neglect and malpractice. How can these types of healthcare providers be trusted in the midst of this? Prison officials have failed and now people are organizing across the country to respond before lives are lost behind the wall. We are demanding the release of target populations based upon scientific evidence that would dramatically reduce the spread of the virus.

The simple answer is, as many people as possible. Every state should have a target number of reduction to their prison populations (by at least half), this can be done by:

This is a valuable opportunity for states to save money (on housing languishing prisoners) and to move it towards providing proper medical care, hygiene and cleaning supplies to.

We are in unprecedented times so unprecedented moves need to be made on both sides of the wall in order to keep our entire population safe. During this health crisis, the Governor has the responsibility to protect its citizens, especially its incarcerated citizens, in the interest of public safety. Sadly, marginalized populations like these have been neglected thus far so community organizers in many states have been drawing attention to this and calling on their governor to use their executive power to protect vulnerable prison populations by expediting releases using the hashtags #LetThemGo #FeeOurFamilies #DecarcerateNow #EndMassIncarceration

At the very least, the governor can use their pardoning and clemency power to depopulate prisons. In order to achieve the numbers needed, an emergency commutation board with multiple community experts should be put into place. Community members must establish a goal number to hold their officials accountable to. Once the number of people in prison decreases to more acceptable levels (for me there is no acceptable number but I’ll deter from that conversation for now) then officials will be able to better allocate resources to protect and provide effective treatment to those who remain. Make sure to contact your governor’s office by phone, email or social media and express your concern for people in prison by sharing your recommendations on how they should be protected.