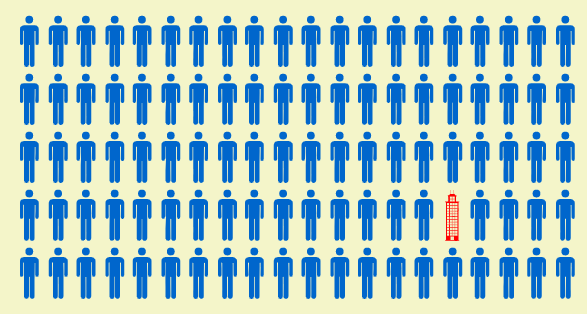 The latest available case-by-case records from the Department of Justice (DOJ) show that the prosecution of white-collar offenders in January 2020 reached an all-time low since tracking began during the Reagan Administration. Only 359 defendants were prosecuted in January 2020. Almost all of these were individuals rather than businesses. January 2020’s prosecutions continued a downward slide, dropping 8 percent from a year ago, and were down 25 percent from just five years ago.

Federal white-collar prosecutions have fallen from their peak of over 1,000 in June 2010 and February 2011. Figure 1 and Table 1 show white-collar prosecutions on an annual basis starting with the Reagan Administration back in fiscal year 1986. During the Obama Administration in FY 2011, they reached over 10,000. If prosecutions continue at the same pace for the remainder of FY 2020, they are projected to fall to 5,175 – almost half the level of their Obama-era peak.

Since separate tracking for business entities began in FY 2004, only 1,300 business entities have been federally prosecuted for white-collar offenses compared with 124,402 defendants who were individuals. As shown in Figure 2, business entities made up just one (1) out of every 100 prosecutions during this period.

This one percent ratio has been fairly consistent over the period from FY 2004 through January of 2020. Thus, federal criminal prosecutions of business entities for white-collar crimes have mirrored overall declining numbers. In fact, both the number of white-collar and other offenses that business entities have been prosecuted for have been generally declining. See Figure 3.

These comparisons of the number of defendants charged with white-collar offenses are based on case-by-case information obtained by the Transactional Records Access Clearinghouse (TRAC) at Syracuse University after successful litigation against the Justice Department under the Freedom of Information Act.