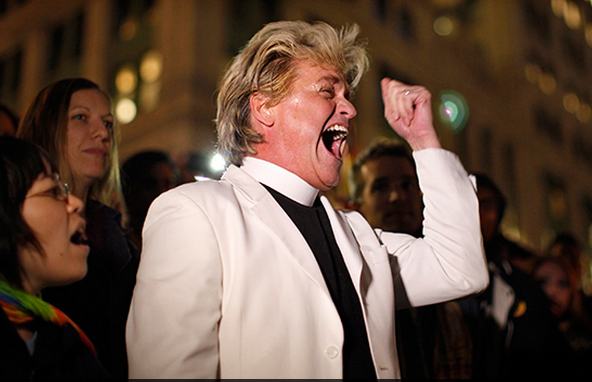 A group of radical performance activists who hail from New York staged an “exorcism” of corporate power outside an international law firm in London to raise awareness about the dangers of an EU-US trade deal being brokered behind closed doors.

The group, Reverend Billy & The Stop Shopping Choir, conduct creative and political performances across the globe to preserve local communities, life and the imagination.

On their website, they describe themselves as “wild anti-consumerist gospel shouters and Earth loving urban activists.”

In a symbolic act of political protest on Thursday, the performance artists targeted the London office of global law firm King & Spalding over its role in Transatlantic Trade and Investment Partnership (TTIP) litigation.

The firm has represented a slew of corporations in lawsuits against governments through a controversial investor protection mechanism – a version of which may form part of TTIP.

The Investor-State Dispute Settlement (ISDS) mechanism in question has been the focus of criticism in Europe and America, with anti-TTIP academics, trade unionists and politicians warning it will pave the way for corporations to sue governments attempting to legislate in the interests of ordinary citizens.

Using this mechanism, King & Spalding has aided multiple corporate clients who are engaged in a series of bilateral trade pacts.

“The controversial EU-USA trade deal TTIP would massively ramp up the ability of corporations to carry out court cases like this,” he said.

“Governments would start implementing legislation on the basis of whether they were safe from litigious corporations rather than whether it was beneficial to ordinary people. And law firms like King & Spalding would make a fortune through representing even more corporate clients in all the additional court cases.”

On Friday evening, Reverend Billy & The Stop Shopping Choir are also expected to attend a 10-day spectacle of dissent organized by Occupy Democracy in protest against corporate capture, environmental chaos and cronyism.

Billed as a Festival of Democracy, the affair will feature a diverse series of workshops, artistic performances, creative direct actions and discussions throughout the election period.

It will begin on Friday evening and finish on May 10.