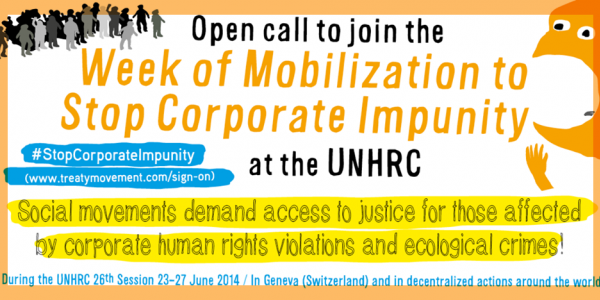 Tribunal hears cases of corporate violations highlighting the need for a global treaty.

The cases will be heard in a special session of the Permanent Peoples’ Tribunal organised by the Global Campaign to Dismantle Corporate Power & Stop Impunity at the Maison des Associations between 9 am and 6 pm. Monica Vargas from ODG-Debtwatch in Barcelona, a main organizer of tribunal, stated that “The testimony that we will hear today prove that a binding treaty is sorely needed in order to provide victims of corporate crimes access to justice.”

The Tribunal will examine cases that confirm that the United Nations’ present Business and human rights regime, which relies on voluntary guidelines rather than legal obligations, is woefully inadequate to deal with ongoing corporate violations. The voluntary approach has merely continued the systemic denial of access to justice for the victims of corporate abuses.

Victims of the decades-long oil pollution caused by Chevron in the Ecuadorean Amazon and of Royal Dutch Shell in Nigeria will present their cases that illustrate the long-standing impunity by big oil companies.

The mining industry will also be on trial through the troubling cases of Swiss mining giant Glencore in the Philippines, Peru, Colombia, the Democratic Republic of Congo and Zambia. Cases will also be presented involving the Canadian mining company Pacific Rim in El Salvador and of United Kingdom based Lonmin in South Africa.Other cases will discuss how human rights have been systematically violated by the Coca-Cola Company in Colombia; by Israel’s water services company Mekorot in Palestine; and by the Spanish Hydro dam company’s operations in Hidralia in Guatemala.

The Tribunal’s jury, composed of a panel of experts including international lawyers, members of parliament and prominent academics, will hear the testimony of victims’ representatives and present a conclusion about the operations of the accused corporations according to existing international human rights instruments and the fundamental need of access to justice.

The Permanent Peoples’ Tribunal will take place in parallel with the 26th session of the United Nations Human Rights Council, where Ecuador has led an initiative by over 80 member countries seeking to start the process for developing a binding treaty to punish TNCs for their violations. The proposal is being staunchly resisted by the EU, US, Japan and others that are the host nations for the large majority of transnational corporations.

”It is disturbing that governments in the European Union, Switzerland, Japan, Canada and the United States are more concerned with defending the interests of their corporations than the human rights of peoples,” said Brid Brennan from the Transnational Institute and the Global Campaign to Dismantle Corporate Power.

Fr. Joy Pelino from the Filipino movement opposing Glencore/Xstrata’s (GX) activities in the Philippines stated that the “company has committed numerous human rights violations including the killing of Bla’an leaders and some members of their family who oppose mining activities in the area, and has desecrated people’s freedom, dignity and identity.” Pelino asserted that “GX’s monstrosity should be stopped and justice needs to be served now.”

The Geneva Peoples Permanent Tribunal provides an opportunity to the victims of corporate violations to publicly present their struggle and to demand the justice that they have never achieved. More generally, it aims to provide a truthful and authoritative account of the operations of TNCs and their repercussions on human rights. Through these testimonies an international audience will recognise the urgent need for a binding international legal instrument that can enforce human rights obligations for transnational corporations.

The judges for the session include the Law professor and researcher Juan Hernandez Zubizarreta, from Hegoa Institute, Basque Country; Francesco Martone, jurist and Senator in the Italian Parliament; Roberto Schiattarella, professor of Economics and vice-president of the Lelio Basso Foundation; and Jean Ziegler, former Sociology professor, former member of the Swiss Parliament, and former UN Special Rapporteur for the Right to Food.

About the Global Campaign to Dismantle Corporate Power: Launched in June 2012, the Campaign was established to facilitate a cooperative movement of solidarity between existing local, national and global movements and networks in order to increase the visibility of resistances to transnational corporations (TNCs) violations around the world. For more information and to see a list of participants and signatories please see: http://www.stopcorporateimpunity.org/

About the Permanent Peoples’ Tribunal:The Permanent Peoples’ Tribunal was established on June 24, 1979 by Lelio Basso, lawyer, Senator, and writer, one of the “fathers” of the Italian Constitution. It is a so-called ‘opinion tribunal’, inspired by the experience of the Russell tribunals on Vietnam (1966-1967) and Latin America dictatorships (1974-1976). It bases its activity on the 1976 Algiers Declaration on the Right of Peoples. The PPT raises public awareness of legal shortcomings affecting the marginalised communities and peoples non-recognised as subjects of rights, in order to provide voiceless victims with a stand of visibility and a possibility of claim, recognition and remedy of their rights.

The entire event will be broadcasted live on the website of the Campaign, the retransmission can be followed in streaming at  http://livestre.am/4mUSq

At the same time, the Campaign has also launched a live Twitter commentary of the hearing to support this event @StopTNCimpunity, using the hashtags #StopTNCimpunity, #BindingStandards, #TratadoVinculante, you are all kindly invited to participate to this outreach effort through your social media.

In order to achieve maximum reach please circulate this message to your contacts in the press, as well as to other social movements, networks and organisations so that they can also give their support.

The cases will be presented to the tribunal by the following witnesses: