Almost 60% of Tax Benefits Will Go To Shareholders, 6% to Workers

In 2018, the Russell 1000 companies we track and analyze for our rankings are set to receive a tax windfall of nearly $150 billion. How will companies distribute this money? Who will benefit most? Will corporations pass savings onto workers? Invest in growth? Give back to their communities? Reward management and shareholders?

At JUST Capital, we are dedicated to elevating the voice of the American public to track corporate behavior and build a more just economy. Since 2014, we’ve conducted some of the most exhaustive polling ever done (engaging 72,000 people to date) to identify what issues are most important to Americans when it comes to just business behavior. Worker pay and treatment have topped the list each and every year.

This tax cut presents companies with an ideal opportunity to begin allocating resources in ways that better align with the public’s priorities.

Our analysis shows that, of the 90 companies that have so far announced their intentions, six percent of tax-related income is being allocated to workers, more than half of which takes the form of one-time bonuses, as opposed to permanent raises or benefits. An additional 22 percent is allocated to job creation. And if we assume that all proceeds not already earmarked for other uses actually flow to management and shareholders in the form of stock buybacks or direct distributions, then 58 percent of corporate spending will go back to investors. 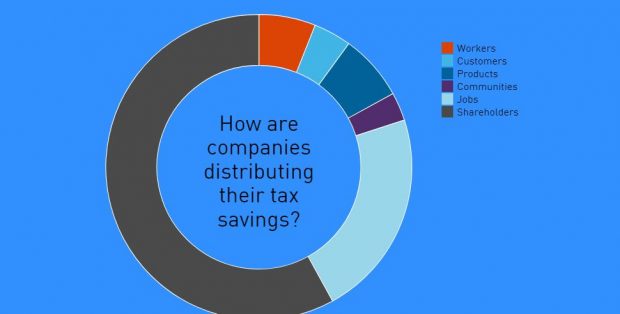 JUST Capital shines a light on how companies perform on the issues Americans care about most. So in addition to tracking where the tax windfall is going overall, we created The Rankings on Corporate Tax Reform to help clarify how each tax announcement is being invested, and how those investments score against the priorities of the American people, which include better pay, bonuses, benefits, as well as job creation, beneficial products and customer experiences, and charitable donations.

The goal of this analysis – which the New York Times calls “one of the most detailed accountings to date” of how corporations are spending their tax windfall – is not only to give greater context, but incentivize more companies to take more just and equitable action. As more and better data becomes available, the rankings will be updated. We hope this serves as an unbiased source of data on this critical issue.