Minneapolis, MN – Super Bowl LII and its corporate partners have begun their 10 days of events in and around Minneapolis. The National Guard, federal agencies, and law enforcement from across the country are patrolling festivities in the Twin Cities from January 26th until February 5th. Super Bowl LII (SB52) has been labeled a National Special Security Event (NSSE) SEAR-I by the Department of Homeland Security (DHS).

The designation of Super Bowl a SEAR-I (PDF) means that it “is a similar event not of the same magnitude or significance as an NSSE, but involving the lead interagency effort of DHS, USSS, and the FBI…The scale and scope of these events requires significant coordination among federal, state, and local authorities and warrants pre-deployment of federal assets as well as consultation, technical advice, and support to specific functional areas in which the state and local agencies may lack expertise or key resources.”

In downtown Minneapolis its effect can be seen in closures of over a dozen streets in three major points: the Convention Center (NFL Super Bowl Experience), Nicollet Mall (Super Bowl LIVE), and the site of the game, US Bank Stadium (see maps below). 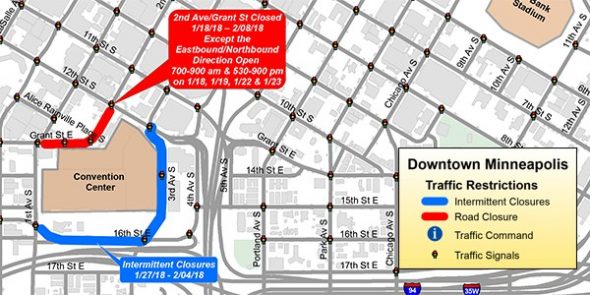 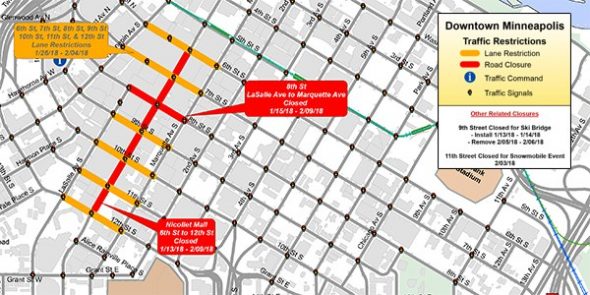 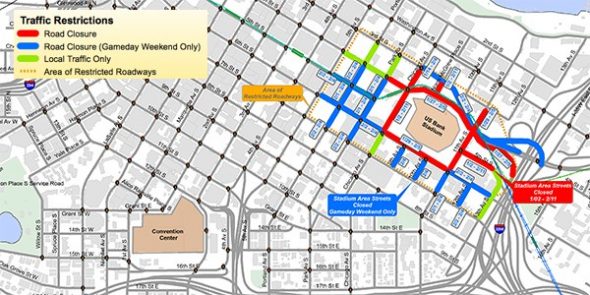 Protests are planned by community members, organizations, unions, and other activists spanning the week leading up to SB52 and on game day itself. A coalition of organizers and community members have created the Super Bowl Anti-Racist Anti-Corporate Coalition aiming to highlight racial and class disparities.

Other coalitions have formed and have publicly stated their involvement in the upcoming week of actions. Black Visions Collective, “a Black-led organization committed to creating a world where all Black Lives Matter“, are demanding the decriminalization of sex workers, an agreement that local police will not work with ICE agents, a long-term divestment from the police, and an investment into communities of color.

The ACLU of Minnesota has created a webpage for protesters titled, ‘Know Your Rights: Super Bowl LII‘, which provides resources on topics of digital security and privacy, types of surveillance technologies used, and overall protester rights.

The NFL’s downtown takeover has put extra hardships on unhoused residents of the Twin Cities. Bridge underpasses and enclaves along the sides of interstates have been swept of people using the space to lay their bodies and the few possessions they hold. This week as SB52 nears, some downtown shelters that are close to the stadium will be forced to temporarily move.

With hundreds of thousands of people expected in the Twin Cities during the long line of events (including daily free concerts arranged by legendary artists Jimmy Jam and Terry Lewis), an estimated economic impact of $220-$340 million is expected from the 10-day stretch. Rockport Analytics projected the higher end figure in a presentation that didn’t factor in the opportunity costs and expenses incurred from effects like transit and street shutdowns. 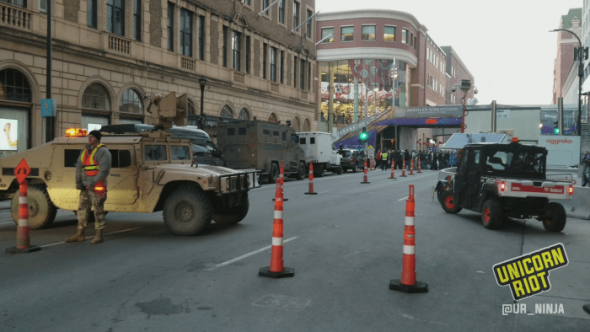 National Guard operate a Humvee at a traffic point on 9th St. in Minneapolis, in the background is a Hennepin County Sheriffs Special Operations vehicle. (Photo taken 1.27.18)

In a complex financial web involving bonds, Minneapolis taxpayers shoveled about a half a billion dollars into building US Bank Stadium a few years ago. In 2014, a lawsuit delayed stadium bond issuance by claiming “the plan to repay the stadium bonds was unconstitutional” and that Minneapolis was violating its own City Charter that required a referendum to use more than $10 million in city resources towards financing of professional sports facilities.

City Attorneys responded to the lawsuit by claiming that the state, not the city government, financed the public share of the stadium through retail sales taxes in Minneapolis. The Minnesota Supreme Court avoided addressing what many deemed an illegal bond scam by claiming the plaintiff didn’t show they had an “adequate remedy at law“, essentially saying that since the possibility of complaining to legislators existed, it was irrelevant whether the bond arrangement was unconstitutional.

In Minneapolis, the construction of the billion dollar US Bank Stadium was the third stadium of over $100 million using taxpayer money in the last 10 years (TCF Bank Stadium and Target Field were the other two, while residents also paid dozens of millions for Target Center renovations).

The debate revolving around local and state municipalities using public money to support corporate businesses and entertainment events is longstanding. Many locals are upset at the continuation of public funds being used for corporate entities and they point to Minnesota consistently being among the top five states in the nation when it comes to disparities in employment, education, housing, policing, and more as reasons why people will be protesting. 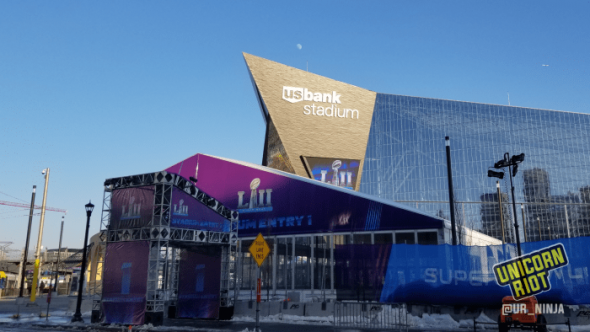 US Bank Stadium is hosting SB52

Security around the area will be openly militarized. Since 2001 (after the 9/11 attacks), every city that the Super Bowl has been held in (except Houston which has over 5,000 police officers) has called-in the National Guard to provide extra security on the streets during Super Bowl festivities. Only three of the last 17 Super Bowl’s have actually been labeled NSSE‘s.

Super Bowl XXXVI (36), the football season of the 9/11 attacks, was the first year that a NSSE classification was given to a Super Bowl event. That year, the Patriots beat the Rams 20-17 in New Orleans.

The next Super Bowl game designated as an NSSE was Super Bowl 50, which was given NSSE SEAR-I. SB50, in February of 2016, showcased a Denver Broncos victory over the Carolina Panthers and featured a historically political halftime performance of Coldplay, Bruno Mars and Beyoncé, whose dancers dressed in Black Panther-inspired attire.

SB52, being played in Minneapolis this upcoming Sunday (Feb. 4) is featuring the New England Patriots and the Philadelphia Eagles and has been designated an NSSE SEAR-I. Minneapolis last hosted a Super Bowl in 1992. 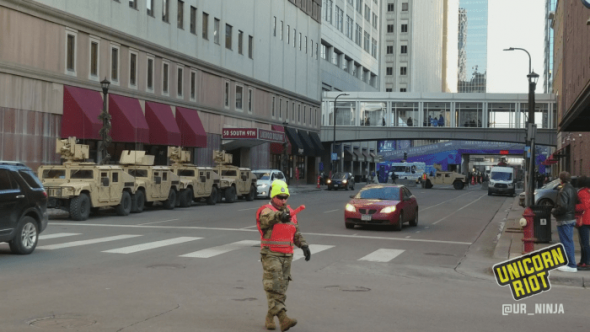 The SEAR-I classification is questioned by some who say that throughout the 52 years of Super Bowls, there has never been an attack at the site of the event. Security experts say the high visibility of this international event makes it “an attractive target [for terrorists] in that sense. However, the amount of security makes it less attractive for someone who wants to launch an attack.”

The Minneapolis Police Department is the lead agency of operations during SB52. There are over 60 departments across Minnesota which has sent officers, 80 officers from other states, over 400 National Guard members, United States Secret Service (who’ve been assisting in SB preparations for years), ICE and FBI agents, hundreds of security contractors, a variety of county Sheriffs Reserves, and over 10,000 volunteers all collaborating to provide security. 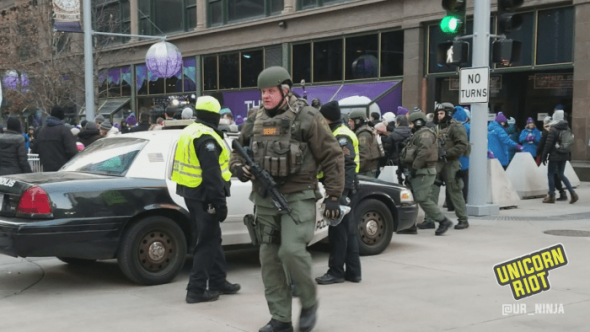 Many locals believe the beefed up security for large sporting events is perpetuating the normalization of military forces into everyday life in the United States.

Locals will be dealing with a twin-engine Bell 412 helicopter flying 300 feet above downtown Minneapolis doing three-day-long radiation level tests occurring from Jan. 29 to Feb. 5. The helicopter is “operated by the Remote Sensing Laboratory Aerial Measuring System in Joint Base Andrews, a Maryland military facility.”

For extra security measures, more than two miles of fencing, mostly sitting atop concrete barricades and adorned with SB52 imagery, outline all of the dozens of newly created structures housing SB52 festivities.

Newly created structures for #SuperBowl52 are all around downtown #Minneapolis.

Over 2 miles of fencing (some of which you can see in the video), mostly sit atop concrete barricades to reinforce security around the new structures & the US Bank Stadium itself. #SuperBowl pic.twitter.com/CDi9iL098O

Representatives from the Minneapolis, Bloomington and St. Paul police departments, FBI, DHS, and the Secret Service, will be stationed at various command centers throughout the city. It’s speculated they will be watching hundreds of surveillance cameras, tracking social media, and monitoring communications on the ground in several locations throughout Minneapolis and the Mall of America.

Thanks to the investigative work of James Eli Shiffer and local public records researcher Tony Webster, the public knows where the lead command center of SB52 is: 511 11th Ave., a mere block from US Bank Stadium. We also know that the City of Minneapolis tried to scrub that information from public knowledge.

The 511 Building is a carrier hotel and internet exchange point, the Midwest’s most critical internet infrastructure north of Chicago. It’s home to the Midwest Internet Cooperative Exchange (MICE), which connects about 75 internet service providers and internet companies. The building’s datacenter is also home to servers for large Minnesota companies, financial institutions, and provides faster, local connectivity for services like Netflix, Amazon, and Google.” 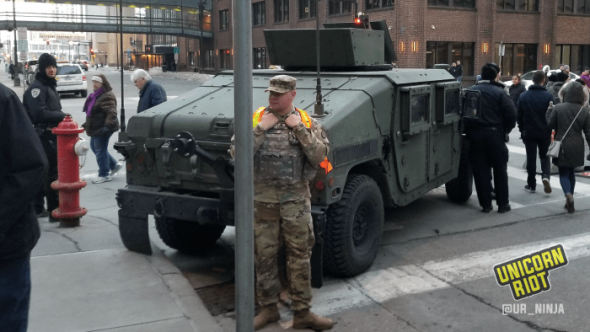 Who is paying, one might wonder, for all of this security? According to Minnesota Super Bowl Host Committee, they’ve set aside about $5 million “for public safety, public works and other costs associated with the game and festivities. The committee is also reimbursing the state $1.08 million for deployment of the National Guard.” 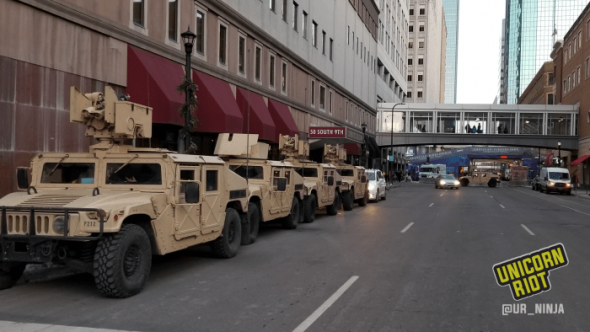 One of the roles of the SB Host Committee, according to Minneapolis Police Commander Scott Gerlicher, was to “raise private funds to help offset the many expenses required not just from a public safety perspective, but from all perspectives in order to host a Super Bowl.” 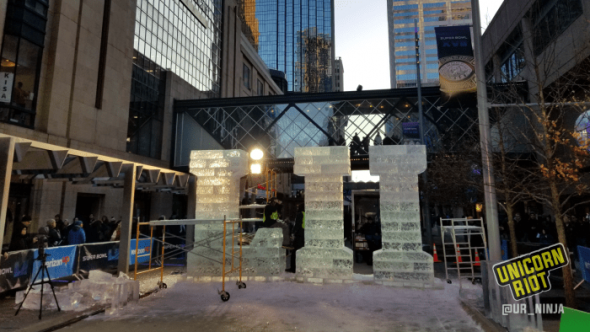 Ice sculptures are seen throughout Nicollet Mall in downtown Minneapolis.

The 2017-2018 NFL football season has been a year filled with highly publicized protests. NFL players continued ‘taking a knee’ and raising a fist to protest police brutality, a silent protest which originated from Colin Kaepernick’s August 2016 protest.

Top level politicians, including the President and Vice President, got involved to protest the acts of protest. The NFL then made a near $100 million deal by the NFL to a controversial Players Coalition to stop the small acts of kneeling or raising a fist during the National Anthem before games. All throughout the controversy, boycotts of the NFL happened from both supporters of Kaepernick and those who despise him.

In Minneapolis, during Super Bowl weekend a two-day conference titled ‘National Take a Knee Conference: Race, Police Violence, & The Right to Protest‘, which is organized “to bring together everyone across the country who has protested police brutality” will take place. The conference will end with a rally at 4 p.m. on Super Bowl Sunday, which they say “will be held as close to US Bank Stadium” as they can get.