NOTE: An update on the process from Apache Stronghold:

In-person access to the hearing will be restricted only to those participating in the hearing; however, Apache Stronghold members, press, and the public can email, AZD-PIO@azd.uscourts.gov, to obtain dial-in instructions to attend the Hearing via ZOOM.

“This place is very holy and religious to us.”

Wendsler Nosie Senior, an elder of the San Carlos Apache Tribe, is describing his people’s land, Oak Flat or Chi’chil Bildagoteel, in the Arizona desert in the US south-west.

The site in the Tonto National Forest is a popular camping and hiking ground and contains sacred cultural heritage locations that include rock carvings, burial sites and the Apache Leap, where Apache warriors jumped to their death after being driven to the edge of the cliff by the US cavalry.

But earlier this month, in the dying days of the Trump administration, the US Government handed over Oak Flat to two of the world’s biggest mining companies, Rio Tinto and BHP.

Through a joint venture named Resolution Copper, the global miners want to build North America’s largest copper mine, on the Apache land, about 100 kilometres from Arizona’s capital Phoenix.

The San Carlos Apache tribe has been campaigning for years to prevent mining at Oak Flat.(Supplied)

Resolution Copper says the planned underground mine, which will be 2 kilometres metres below ground, will bring nearly 4,000 jobs and tens of billions of dollars in economic benefits to the region.

Dr Nosie likens Oak Flat to Mount Sinai in Egypt, where Moses is said to have been given the Ten Commandments by God.

“Oak Flat is identical to the way they explain Mount Sinai in the Bible,” he tells the ABC.

“This place has religious significance since the beginning of time, in today’s present and into the future. It’s our identity, it makes up who we are.”

His group, Apache Stronghold, is suing the US Government to try to stop the land transfer, which he says will destroy their heritage and pollute the land and water.

Resolution Copper denies the approval process has been fast-tracked and says it is consulting with the 11 Native American tribes in the region.

In a December letter to the tribes, Resolution Copper project director Andrew Lye said the proposed mine was at an early stage.

“No final decision to proceed with the mine has been taken, and there will be no immediate change to the public access and land features at Oak Flat,” he told them.

In May last year, the big miner blew up two ancient rock shelters in the Juukan Gorge to expand a huge iron ore mine in north-west Western Australia’s Pilbara region. 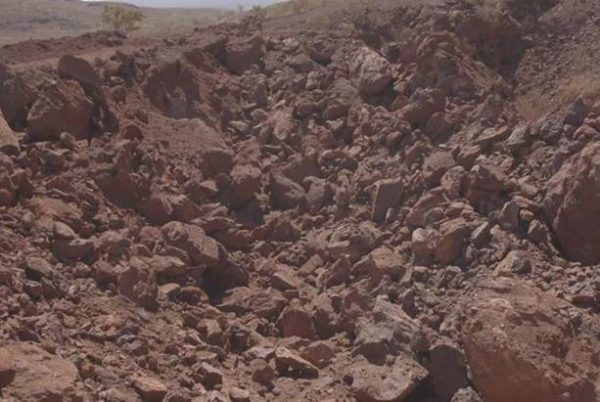 The aftermath of a massive explosion which blew up WA’s Juukan Gorge caves.(Supplied).

The blast destroyed 46,000 years of human history, a site that archaeologists said was of the highest cultural significance for the traditional owners, the Puutu Kunti Kurrama and Pinikura (PKKP).

Rio’s plan to press ahead with the Resolution Copper mine comes after chairman Simon Thompson pledged the company would “never again” destroy such an important sacred site.

It has been a steep fall from grace for one of the world’s biggest miners.

In 2013, Oxfam said Rio Tinto was the only one of 53 big miners on the Australian stock exchange to have a public commitment to United Nations principles on gaining consent from traditional owners.

But now the big miner’s reputation is in tatters amid the fallout from the Juukan Gorge destruction, the fight with the Apache tribes and legal action by villagers in Bougainville, the site of Rio’s former Panguna copper mine, which sparked a civil war between Bougainville and Papua New Guinea and left a trail of environmental devastation.

A revolt by investors over the Juukan Gorge incident forced former chief executive Jean-Sebastien Jacques and two other top executives to fall on their swords.

A federal parliamentary report found the PKKP had been let by down Rio Tinto, the West Australian Government and even its own lawyers in its urgent attempts to stop the destruction of the ancient caves going ahead.

Last month, the PKKP said Rio Tinto had taken steps to address the hurt and devastation caused by the destruction of the Juukan Gorge caves.

But Kurrama elder Burchell Hayes says the big miner has more to do to avoid the unnecessary destruction of cultural heritage sites.

“While we have made some initial positive steps in rebuilding our relationship, there is so much more we need to do in order to shape a shared future for our next generations of PKKP people working with Rio Tinto,” he says.

Investors ‘disappointed’ by appointment of insider as new CEO

Some Rio Tinto investors are unhappy the big miner ignored calls for an Australian to be appointed as the new boss, including from Federal Treasurer Josh Frydenberg, instead appointing chief financial officer Jakob Stausholm as the new chief executive.

The PKKP says it has noted the appointment.

Debby Blakey, chief executive of the HESTA superannuation fund, which has a major investment in Rio, says there have been very significant governance, oversight, leadership and cultural failures at the company.

“I think this appointment does make us raise questions again,” she tells the ABC.

“Have they really understood the depth of our concerns regarding these issues? The depth of concerns from investors generally?”

Head of Australian equities at Schroders Martin Conlon told an investment briefing last week most investors would have preferred an “external CEO”.

But veteran resources analyst from UBS, Glyn Lawcock, says Rio Tinto is sticking to its current direction with the appointment of Mr Stausholm.

“An internal candidate does suggest they are comfortable with the strategy,” he says.

Mr Stausholm said last week in a note to staff that consultations with the PKKP were continuing and Rio had imposed a moratorium on mining around Juukan Gorge.

“Juukan Gorge has taken its toll on many of us and, understandably, many of you are disappointed and feel let down,” he said.

“For this I am truly sorry.

“We are working hard to heal and rebuild our relationships, credibility and reputation — both internally and externally. I do not underestimate the time and effort it will take to achieve this.”

“I think on the ground in Western Australia, definitely the iron ore team are trying to effect some change, but obviously it needs a level of leadership from the CEO down,” he explains to the ABC.

“And unfortunately we are witnessing with the San Carlos Apache people at Oak Flat in Arizona a repeat of Juukan in another jurisdiction.”

While Mr Jacques had been seen as a crash-or-crash-through, take-no-prisoners leader, Mr Stausholm is described as a measured and more consultative manager who can lead Rio Tinto through a self-inflicted crisis.

He is a former director of oil and gas giant Woodside Petroleum and he is set to spend a lot of time in Australia.

“The question is whether they are committed to change and reform, whether they can deliver that internally,” he says.

Investors push for board renewal at Rio AGM

Investors are now focused on the Rio Tinto annual general meeting in April and getting change on the board, including the appointment of Indigenous members.

Independent board director and former top Australian public servant Michael L’Estrange is under pressure in the wake of an internal report on the destruction of the caves being slammed as a “whitewash”.

Chairman Simon Thompson is also under fire for his handling of the Juukan Gorge incident.

Corporate governance expert Brynn O’Brien from the Australasian Centre for Corporate Responsibility says investors are asking whether the current board is up to the job.

“I think Michael L’Estrange, who led that thoroughly discredited internal review, is in investors’ sights,” she says.

“And, given the indecisiveness and vacillation that we’ve seen since May last year, I think the chairman’s position is also very much in focus.”

Call for First Nations board members

Mr Muir says the appointment of Indigenous board members could help improve relations between Rio and traditional owners.

“It is incumbent on Rio Tinto as a global corporate citizen to have the suitable governance structures in place to ensure that rights of First Nations peoples are respected and protected in the way they go about business,” he says.

Dr Nosie agrees having traditional owners on the Rio board is important, as long as it is not tokenism.

“But the negative thinking is that is going to be their loophole to get away with the thing that they are doing, because they would say, ‘Well, we’ve consulted with this native person on the board.'”