Corporations Should Have To Hear From Their Owners

Note: There are campaigns to get big banks to stop financing projects that continue the oil and gas-based economy. People are calling for divestment from banks that fund fossil fuel infrastructue. Others are working to hold corporations accountable for their role in the climate change crisis.

Some take the formal route of shareholder resolutions debated at annual meetings. Others take the direct confrontation route whether at an annual meeting or at a protest outside their offices. Steve Norris, an activist with Beyond Extreme Energy and other climate groups reported about a protest at a Bank of America meeting interrupting their CEO: “Yesterday Sally Kenidel, Charles King and I took over the shareholder meeting briefly as CEO Brian Moynihan was starting to brag about BofA’s growth.” They were protesting because Bank of America has led the way to create a $3.25 billion line of credit for the Atlantic Coast Pipeline. BoA’s share of this is $255 million.  Other Banks we know well in this consortium include JP Morgan Chase ($255 million), Credit Suisse ($153 million), Deutsche Bank ($153 million), PNC ($153 million), Royal Bank of Canada ($255 million), TD Bank ($153 million), Wells Fargo ($153 million), BB&T ($100 million). 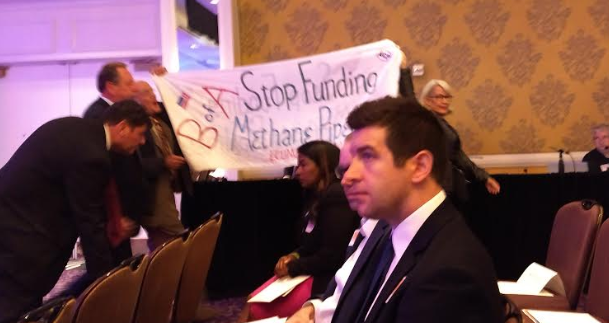 New federal rules make it harder for shareholders to improve practices at the companies they invest in.

When we think about ways to pressure corporations to improve their practices, we may think of petitions, street demonstrations, boycotts, or social media campaigns. Yet there’s another way that’s been used effectively for decades.

It involves those who stand to gain from keeping companies healthy over the long term. It’s called shareholder action.

Shareholders, who are part-owners of the companies in which they invest, can use their investor status to pressure companies to be better corporate citizens. You’re a shareholder if you buy stock in a company.

While not usually in the limelight, people who care about the social and environmental impacts of the companies in which they invest have helped improve corporate conduct for decades.

Shareholders pressured companies to stop doing business with the Apartheid regime in South Africa. They’ve gotten many companies to ensure that women and people of color are in present in management and on corporate boards. And they’ve gotten companies to take action on climate change.

Shareholder action consists of several approaches. Investors meet with management, file resolutions that all shareholders get to vote on, and vote in support of resolutions on social, environmental, and sound corporate governance issues.

How do we know that shareholder action is effective?

For one thing, we see companies change practices and adopt new policies. For another, when conservative groups like the Chamber of Commerce and the Business Roundtable oppose corporate responsibility initiatives, you know they’re having impact.

For decades, the Securities and Exchange Commission (SEC) has given concerned investors a process to raise issues that might otherwise go unrecognized or ignored by company leaders. It’s let shareholders request company reports on things like board diversity, labor conditions, human rights, environmental stewardship, and climate impacts.

Last November, corporate lobbyists scored a big win when the SEC gave companies more latitude to disregard shareholder proposals that companies claim are related to “ordinary business,” as opposed to major policy issues. The SEC also said it would give more consideration to disallowing resolutions that pertain to less than 5 percent of a company’s financial value.

Several hundred corporate responsibility resolutions are filed each year at publicly traded companies, most of which get voted on in the spring. The new SEC guidance came just prior to this year’s springtime rush.

A worrisome example of the new trend was a recent resolution filed with the oil and gas company EOG Resources by Trillium Asset Management, on setting a carbon emissions goal. The SEC considered this micromanaging, even though there have been many similar resolutions at other companies.

We’re now seeing companies pushing back against important resolutions by concerned investors — and succeeding. Other goals that might get blocked include addressing discrimination and environmental sustainability.

A growing number of investors want to know about the broad range of corporate impacts their assets support. They also understand that attention to social and environmental issues makes companies competitive in the long run.

No company should refuse to explore investor concerns over such legitimate issues.

It’s not acceptable to limit companies’ concerns to short-term financial profitability. The well-being of people and the planet is a corporate and investor concern and responsibility. Smart shareholders and businesses know that.

The SEC would best serve our economic future by recognizing this as well.