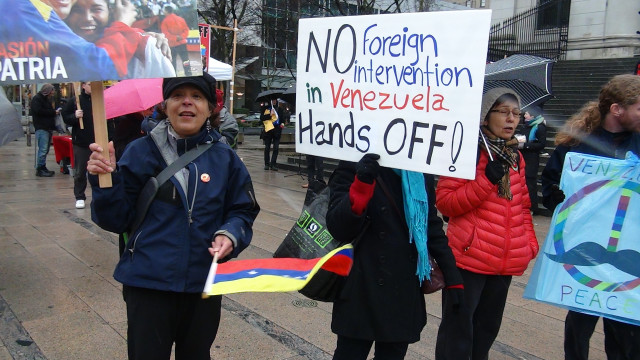 Above photo: From Venezuela Solidarity.

As the class struggle heated up in Venezuela this year, fueled by interventionist threats by the pro-US Organization of American States (OAS) bloc, many former supporters of the Bolivarian revolution have remained sitting on the fence. Fed up with these fair-weather friends and their critiques which recycle corporate news propaganda, some defenders of Venezuela such as Shamus Cooke,  Greg Wilpert, Maria Paez Victor, have come with articles clarifying the stakes and calling the so-called “left” to account.

Among the disaffected is Venezuelan-American lawyer Eva Golinger, the author of The Chávez Code: Cracking US Intervention in Venezuela and self-described friend and advisor to Hugo Chávez.

The day after Trump threatened to militarily intervene in Venezuela, Jeremy Scahill posted his interview with Eva Golinger on The Intercept, one reinforcing some corporate press distortions of Venezuela under President Maduro. Golinger hardly goes as far in this anti-Maduro campaign as Scahill, who more clearly fits what Shamus Cooke characterized as “the intellectually lazy ‘pox on both houses’ approach that has long-infected the U.S. left.”

To her credit, Golinger does emphasize the real class issue ignored by “pox on both your houses” liberals like Scahill: Washington’s and the Venezuelan right-wing’s goal is to crush the heart and backbone of the Chavista revolution, “the grassroots, the social movements, the workers, the community organizers, the people who are actually the ones trying, struggling to hold on to anything that’s left of this movement that they have been building and empowering themselves with now over the past fifteen years or so.”

And, counter to claims of Maduro “authoritarianism,” she correctly notes in her recent article:

Imagine if protestors were to use lethal weapons against security forces in the U.S., even killing some of them. In Venezuela, the anti-government protestors have even burned innocent bystanders to death because they suspected them of being ‘chavistas’. Were that to happen in the U.S., the repression and forceful action by the state would far exceed the leniency exercised by the Venezuelan government in the face of these deadly demonstrations.

(a) Golinger writes:  “The demonstrations arose from the massive discontent throughout the country as food shortages, lack of access to medications, skyrocketing inflation and erosion of democratic institutions have intensified since Maduro won office by a slim margin in 2013.”

In fact, the violent demonstrations arose as part of a coordinated effort by OAS General Secretary Luis Almagro, the US government, and the right wing MUD opposition to generate a chaos in the streets that demanded OAS “humanitarian intervention’ to restore order and displace the Maduro government. While there is massive discontent due to food and medication shortages and inflation, those most affected by this, the working classes and poor, are not the ones participating in the anti-government protests.

(b) Golinger defends Attorney General Luisa Ortega, [“the judicial maneuvering by the country’s highest court to silence critics should cease.”] who was eventually removed by unanimous vote of the Constituent Assembly after recommendation by the Supreme Court. The issue was not simply being a critic; Ortega had failed to prosecute violent protesters and their financial backers, and lied to the public.

(c) Golinger writes: “A growing number of Venezuelans who supported Hugo Chávez and his policies have distanced themselves from his successor, dismayed by the country’s turn from a once vibrant participatory democracy towards a closed one-party state, intolerant of critics.”

She, as with other fair-weather friends, sees a divide between the Maduro and Chavez eras, when, in fact, the fundamental problems of oil dependence, corruption, bureaucracy existed throughout this period, in part overshadowed by Chavez’ charisma and high oil prices.

That the majority of opposition MUD parties are participating in the coming October regional elections clearly proves Venezuela is not a “one-party state, intolerant of critics.”

(d)  She writes: “President Maduro’s convening of a constituent assembly to rewrite the nation’s constitution has been vehemently rejected by the opposition and has caused severe internal rifts within his own movement.”

Events have shown “severe internal rifts” to be false. The July 30 vote was a major victory for the Chavistas and a major defeat for the right wing. Now the violence has mostly ended and opposition parties say they will participate in the upcoming elections.

(e) Scahill dishonestly claimed the July 30 vote for the Constituent Assembly “was held after an order issued by Maduro. Why that was necessary was baffling even to former supporters of Chavez, as the Bolivarian movement has often celebrated its constitution as a revolutionary and meticulous document. For many seasoned observers, the whole affair reeked of an effort to consolidate power.”

(f)  Scahill claims: “The vote for the assembly was boycotted by many Venezuelans and when the official results were announced, it was clear that the tally had been tampered with.”

Like the claims of “no doubt” Russia interfered with the US election, Scahill’s “it was clear” comes with no evidence attached.

Golinger, who is not as hostile as Scahill, still says:  “There’s a lot of indication that it wasn’t a free and fair vote — that the tallies are not accurate.” But she likewise gives no evidence for this “indication”.

In fact, international election observers have vouched for the validity of the vote, and the agreement of opposition parties to run in the upcoming regional elections implies they accept the integrity of the National Electoral Council.

(g) Golinger says the government chose the candidates for the Constituent Assembly, so it would have won regardless of how many voted. In fact, people were free to nominate anyone, and in the end, there were 6120 candidates for 545 seats. She does not mention that Chavista candidates won for the simple reason that the opposition boycotted the Assembly election, having planned to have overthrown Maduro by then.

(h) Scahill asserts: “Maduro’s forces have also conducted raids to arrest opposition figures and both government forces and opposition forces have been involved in lethal actions during protests. It must be pointed out that Maduro controls the country’s military and intelligence forces and those far outgun all of the combined masses of government opponents.”

Is he actually surprised that a country has armed forces that can outgun the civilian population? Scahill does not mention that army and police members have also been charged with killing opposition protesters.

(i) Golinger makes a series of misleading statements comparing the present Constituent Assembly process to the one that took place under Chavez. The Chavez one “was put to a vote after he was elected, to whether or not people actually wanted to proceed. More than 70 percent of those participating said yes. Then they elected the members. Then it was done in this extremely open, transparent way. You know, there were drafts of the constitution passed around and discussed in communities. And then it was put to another vote to actually ratify it by the people on a national level. So I mean, we’re missing almost all of those steps this time around and it lasted four months, it had a mandate of four months. And it wasn’t all-supreme, that it could be a legislator and an executor and an enforcer, which is what we’re seeing now.”

The President of the Republic shall not have the power to object to the new Constitution. The existing constituted authorities shall not be permitted to obstruct the Constituent Assembly in any way.

It is hard to believe Eva Golinger does not know this. She claims the present process is a “major rupture” from the Chavez era, when, in fact, the government and Constituent Assembly are simply following the Chavez 1999 constitution.

(j) She says: “I wish that they hadn’t moved forward with this rewriting of the constitution and creating this sort of supra government, because it does make it more difficult to find a solution to the crisis.”

We see that the opposite is the case. The vote for the Constituent Assembly has made it easier to find a solution.

Maduro did not act in an authoritarian manner. He did not quell the violent protests by declaring a national emergency and resorting to police and military repression. He did not use death squads, or torture, jail and exile the opposition. Instead he called for a Constituent Assembly, and with the mass show of support in the election, the violence has died down, and most of the opposition has returned to the electoral field.

We should call this for what it is: a humanitarian example for other governments when faced with social unrest.

With the July 30 Assembly vote, the US, the OAS Almagro bloc, and the opposition MUD have suffered a serious defeat, as even the hostile New York Times has noted. This gives the progressive forces an opening to resolve the serious problems the country faces. The extent it will make use of this opportunity to break out of the unresolved social, political and economic conflicts of the last few years remains to be seen.