Above: Venezuela Protest against sanctions in Canada, August 9, 2018. From compartycanada.

It is important to correct the “humanitarian crisis” disinformation head on and urgently. Many people are taken in by this argument that Maduro is blocking humanitarian aid. Please distribute the fact sheet below and share this article.  Encourage people to write letters to the editor and otherwise confront this false narrative.

The most immediate humanitarian aid that could be provided by the United States and Canada would be to drop the sanctions. The European Union and the United States plan to send $60 million in aid, despite the fact that the Venezuelan government is demanding the return of more than $23 billion dollars to Venezuela that is frozen in accounts being held in the U.S., Canada, and Europe that they consider stolen from their public treasury. This money could have been spent on the necessary importation of food and medicine for the benefit of the entire population.

Is There Really A Humanitarian Crisis In Venezuela?

One of the talking points repeated ad nauseum about the situation in Venezuela is about
President Maduro’s alleged blocking of humanitarian aid. To understand what’s actually going
on, however, some context is needed first.

The U.S. government, corporate media, and NGOs interested in regime change repeatedly claim there is a humanitarian crisis in Venezuela. This is not new; this narrative has been pushed since at least 2016.

However, the economic situation in Venezuela does not reach the scope of a humanitarian crisis:

–  “I have compared the statistics of Venezuela with that of other countries and there is no humanitarian crisis, of course there is scarcity, anxiety and shortages but those who have worked for decades for the United Nations and know the situation of countries in Asia, Africa and some of America, know that the situation in Venezuela is not a humanitarian crisis,” then UN Independent Expert on the Promotion of a Democratic & Equitable International Order, Alfred De Zayas, February 20, 2018

–  “The country is not in a humanitarian crisis, definitely not, we need to be clear about that. There are shortages of certain goods and political tensions, but Venezuela still has many elements to be a vibrant and economically thriving country, and it is making efforts to diversify its production,” Alicia Barcena, Executive Secretary Economic Commission for Latin America and the Caribbean, October 25, 2016.

– According to a 2019 UN Food and Agriculture Organization Report, the percentage of undernourished people in Venezuela is 11.7%. For the sake of comparison, the average undernourishment is 23.2% in Sub-Saharan Africa, 31.4% in Eastern Africa, 14.8% in Southern Asia, 14.5% in Central Asia and 16.5% in the Caribbean.

In 1999, food security was worse in Venezuela than it is now: 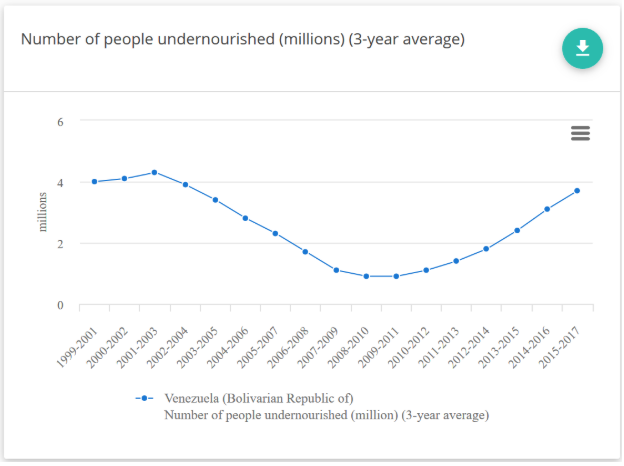 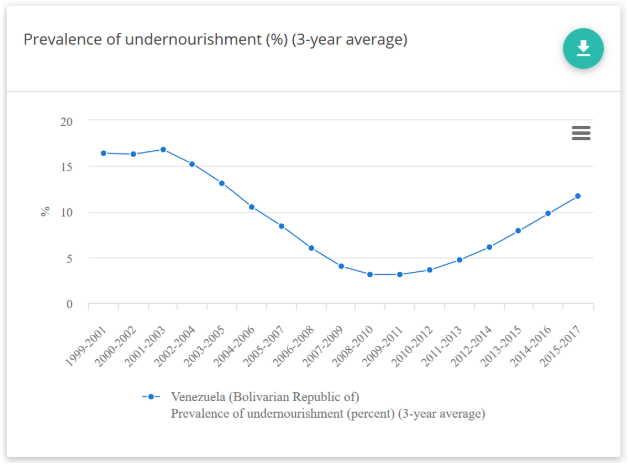 Why was there no push to bring aid to Venezuelans in the 1990s, when things were clearly worse?

There is no denying that the graphs also show an uptick in food insecurity. This is due to Venezuela’s economic crisis and the impact of U.S. sanctions.

Here is what Idriss Jazairy, the UN’s Special Rapporteur on the negative impact of the unilateral coercive measures, has said about the sanctions on Venezuela:

“The economic war against Venezuela, carried out not only by the United States, but also by the Grupo de Lima in clear violation of Chapter 4, Article 19 of the OAS Charter, the financial blockade and the sanctions have demonstrably caused hundreds of deaths directly related to the scarcity of food and medicines resulting from the blockade.” – February 7, 2019.

Here are some of the programs the Maduro government has implemented to ensure food and nutrition security:

CLAPs – Local Committees for Supply and Production
This program involves grassroots-organized communities who produce or receive food and then distribute it regularly and directly to 6 million families at zero to low cost. For a sense of scale, keep in mind that Venezuela is a country of 30 million people.

President Maduro recently announced that in the first quarter of 2019, the CLAP boxes would be sent every 15 days.

The Food Vulnerability Attention Plan serves the needs of our most vulnerable populations by giving them specific foodstuffs to ensure their nutrition.

– Over 620 thousand people have benefited from it.

Furthermore, an opposition-linked economist forecast 10% growth for the Venezuelan economy in the fourth quarter of 2018, suggesting that the worst of the economic crisis had been overcome. Of course, the impact of the Trump administration’s latest sanctions has yet to be determined.

Why is it important to clarify that there is no humanitarian crisis?

A humanitarian crisis can be used as an excuse to intervene militarily. This has been the explicit posture of the U.S. since at least 2015, when then head of U.S. Southern Command, General John Kelly (later White House Chief of Staff when President Trump first threatened Venezuela with military force), warned of U.S. intervention regarding Venezuela’s “humanitarian crisis… we could react to that only if we were asked to do it.”

This is important given that Juan Guaido, leader of the coup attempt, recently expressed he was open to authorizing a U.S. intervention.

This posture by the U.S. Southern Command was reiterated by Admiral Kurt Tidd on April 6, 2017: “The growing humanitarian crisis in Venezuela could eventually compel a regional response.”

What about the U.S. “humanitarian aid”?

The United States is offering $20 million in aid – 60 tons of food. To compare, in 2017 the CLAP program distributed 42,000 tons of food per month. It has only grown since then.

As Fairness & Accuracy In Reporting has demonstrated, the issue of aid is a sophisticated public relations stunt:

The pictures used in many mainstream media outlets to argue that Venezuela has blocked aid are in fact pictures of a bridge that has yet to be opened.

The person in charge of the aid, Elliott Abrams –named as Special Envoy for Venezuela on January 25, 2019 – has a history of sending weapons in shipments of “humanitarian aid.”  These weapons were given to Contras in Nicaragua, a group of armed extremists who sought to violently overthrow the government.

In 1990, the United States blatantly interfered in the Nicaraguan elections by extorting and threatening “Nicaraguan voters that it would continue fueling the decade-old contra war and maintain its economic embargo on Nicaragua” if they did not choose the U.S.’s preferred candidate. Is history repeating itself?

On February 5, 2019, Venezuelan authorities discovered a shipment of weapons and military equipment on a flight that originated from Miami.

U.S. history of using humanitarian aid as a pretext for military intervention is not limited to Nicaragua. In 1965, President Lyndon Johnson ordered an invasion of the Dominican Republic. “Johnson himself had specifically removed any such references [of a communist threat] from the drafts of his statement [regarding the invasion] to encourage an emphasis on the peace-keeping and humanitarian aspects of the intervention.” The Organization of American States signed off on the invasion, only to apologize 50 years later.

Both the International Committee of the Red Cross (ICRC) and the United Nations have denounced the politicization of aid inherent in the U.S. scheme:

“Humanitarian action needs to be independent of political, military or other objectives… What is important is that humanitarian aid be depoliticized and that the needs of the people should lead in terms of when and how humanitarian aid is used.” – U.N. spokesperson Stephane Dujarric, February 6, 2019.

Whatever plans U.S. officials “have to help the people of Venezuela, it has to be shielded from this political conversation… It is obviously a very difficult conversation to have with the U.S. … We are not kind of an implementing agency for any donor, specifically not to implement things that have a political tone… We are not taking any side. Regardless of the political situation, our focus will always be on what we can do.”-ICRC director of global operations Dominik Stillhart, February 1, 2019.

Is Venezuela refusing aid? No.

-The Maduro government has been holding talks with the ICRC, the United Nations, and the World Health Organization to receive medical supplies and finance agricultural projects:

-The ICRC and Venezuela’s Health Ministry are discussing a plan to increase support for high-risk areas on the Venezuela-Colombia border and to tackle malaria.

-The UN, through UNICEF and FAO, signed cooperation agreements with Venezuela on education and food, water and transportation services on January 15. The UN Country Team in Venezuela tweeted that they responded to an invitation by President Maduro.

What Venezuela is refusing is politicized aid from the United States, especially given that the 2017-2018 U.S. sanctions cost the Venezuelan economy over $23 billion in 2018 alone. These sanctions have impacted Venezuela’s ability to import food, medicine, and supplies necessary for agricultural production.

Moreover, through its newest sanctions announced on January 25, 2019, the Trump administration is attempting to take control of nearly $20 billion in Venezuelan assets in the U.S.

Even the New York Times recognizes that the sanctions are hurting everyday citizens.  If the U.S. government had a sincere concern for the well-being of the Venezuelan people, it would immediately lift the economic and financial blockade.

Note: It is important to take on this “humanitarian crisis” disinformation head on and urgently. Many soft-headed, I mean, soft-hearted people are taken in by this argument that Maduro is blocking humanitarian aid. Please distribute widely and encourage your bases to write letters to the editor and otherwise confront this false narrative. The most immediate humanitarian aid that could be provided by the United States and Canada would be to drop the sanctions!