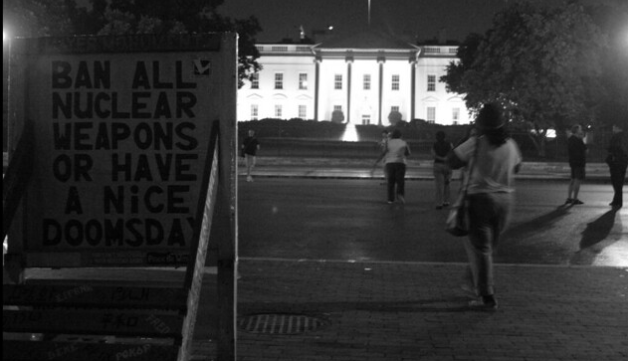 The anti-nuclear weapons campaign has been boosted by the UN Global Compact adding nuclear weapons to its list of excluded investments, and the UN Human Rights Committee adopting General Comment 36, which affirms that the threat or use of nuclear weapons violates the right to life. Activists are also referring to the 2017 Treaty on the Prohibition of Nuclear Weapons (“Ban Treaty”) and the International Court of Justice 1996 nuclear weapons case to convince their cities, universities, governments, pension funds and banks to end their investments in nuclear weapons.

To date, four federal governments have adopted nuclear weapons divestment policies as a result of initiatives by parliamentarians and civil society – Norway in 2006, New Zealand in 2008, Switzerland in 2012 and Leichtenstein in 2016. Nuclear weapons divestment policies have been adopted by a number of states, cities, universities, religious institutions, banks, pension funds, and private investors.

On June 26, 2019, New York City Council members introduced a resolution calling on the city to divest from companies involved in the production of nuclear weapons, support the Treaty on the Prohibition of Nuclear Weapons, and reaffirm New York City as a nuclear weapons free zone. These divestment policies add to those adopted earlier by North­ampton (MA), Oakland (CA) and Takoma Park (MD).

Three international developments have stimulated, and provide support for, the global nuclear weapons divestment campaign. In July 2017, a multilateral Treaty on the Prohibition of Nuclear Weapons was negotiated and adopted by non-nuclear-countries at the United Nations.

In September 2017 the UN Global Compact (on investment) revised its Integrity Policy to add to its exclusion list companies involved in the sale, production, manufacturing, possession, distribution and/or transport of nuclear, chemical or biological weapons. This is an extremely influential development as the Compact includes over 9,500 companies in 160 countries.

On October 30, 2018, the UN Human Rights Committee affirmed in General Comment 36 that the threat or use of nuclear weapons is incompatible with the Right to Life, a right enshrined in the International Covenant on Civil and Political Rights (ICCPR), and may amount to a crime under international law.

The Human Rights Comm­ittee also affirmed that States Parties of the ICCPR—which includes all of the nuclear-armed States except China—must take all necessary measures to end production of nuclear weapons. This would include ending investments in the nuclear weapons industry.

Move the Nuclear Weapons Money is an international campaign that aims to re-direct budgets and investments away from nuclear weapons toward sustainable development. One trillion dollars is being spent to modernize the nuclear arsenals of nine countries over the next 10 years. We’re going to show the scale of this investment and how it could be devoted to peace and humanitarian needs, rather than the threat of nuclear annihilation.

While governments meet at the United Nations for United Nations Disarmament Week and the UN General Assembly, Oct 24-30, 2019, we’re going to count the money by hand—$100 million per minute in $1 million notes, in front of the United Nations and at other publicly visible places in New York City. Counting will take seven days and nights. You can help! Join a team of two to count for half an hour or more. Teams will include people of all ages, nations, backgrounds; celebrities, activists, politicians, UN officials, diplomats, artists, religious leaders, sportspeople, refugees and others.