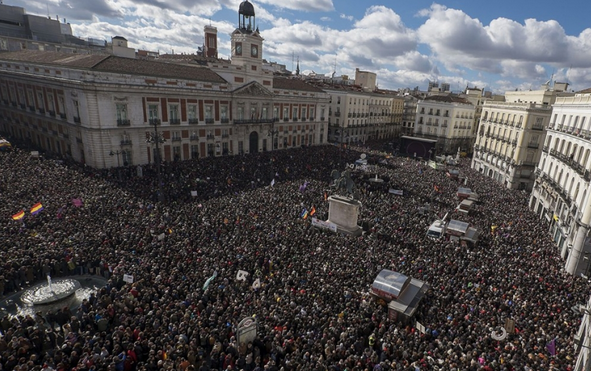 Countries Around World Are Revoking Freedom Of Assembly

On March 26, without much fanfare or attention from U.S. media, the Spanish government ended freedom of assembly. In the face of popular opposition (80 percent of Spaniards oppose it), the upper house passed the Citizens’ Security Law. Under the provision, which goes into effect on July 1, police will have the discretionary ability to hand out fines up to $650,000 to unauthorized demonstrators who protest near a transport hub or nuclear power plant. They will be allowed to issue fines of up to $30,000 for taking pictures of police during protest, failing to show police ID or just gathering in an unauthorized way near government buildings.

The law doesn’t technically outlaw protest, but it’s hard to see what difference that makes in practice. Imagine if the NYPD, without judicial oversight, could give $650,000 fines to every Black Lives Matter protester participating in die-ins at Grand Central. Never mind that they could never pay: Would anyone return day after day, racking up millions of dollars in fines?

Spain is only the latest “democracy” to consign freedom of assembly to the dustbin. While earlier eras of protest and riot sometimes wrested concessions from the state, today the government’s default response is to implement increasingly draconian laws against the public exercise of democracy. It raises the question: How many rights must be abrogated before a liberal democracy becomes a police state?

In Quebec, where student strikes against austerity once again disrupt civil society, marches are being declared illegal before they’ve even begun. At the height of the last wave of student strikes in 2012, the Quebec legislature passed Bill 78, which made pickets and unauthorized gatherings of over 50 people illegal and punished violations with fines of up to $5,000 for individuals and $125,000 for organizations. Similar fines are once again imposed on protesters.

Last October a law was passed in Turkey allowing police to search demonstrators and their homes without warrants or even grounds for suspicion, allowing for a much looser definition of and harsher punishment for resisting arrest and making covering one’s face at a protest or shouting particular slogans crimes punishable by years in prison. This February in London police forced climate protest organizers to hire private security for marshaling a rally, making protesting not a free public right but an expensive private expense.

The list goes on: France banned Palestine solidarity demonstrations; police in Australia gained the power to bar protesters from appearing in public spaces for a year, even if they work or live there; and Egypt, Ukraine andRussia’s governments have outlawed protest entirely. Mexico’s Congress approved la ley antimarchas, which, if ratified by the states, will modify the constitution so that any unauthorized gathering would be illegal — the constitutional end to freedom of assembly. All of this in 2014.

The politicians and the governments have made their choice: stability and continuity, by any means necessary.

And the United States is hardly doing better. In Baltimore many of those who protested Freddie Gray’s death were held without charges for over 48 hours. Cells designed for one or two people were crammed with dozens, and prisoners haven’t been allowed phone calls, blankets, pillows or any contact with lawyers or anyone from the outside world. In 2012, H.R. 347 made protesting near government buildings, political conventions or global summits — except in heavily policed and encaged “free speech zones” — a federal crime. After the Black Lives Matter movement subsided in New York City, Police Commissioner William Bratton demanded a new force of 1,000 police, armed with machine guns, specifically to monitor protests and sought to turn resisting arrest into a felony.

The right to freedom of assembly is guaranteed in the United Nations’ Universal Declaration of Human Rights and appears in almost all democratic constitutions, including the First Amendment of the U.S. Constitution. The freedom to speak out and protest were often at the heart of Cold War claims that the “free world” was superior to the “evil empire.”

Of course, even in democratic countries, the police and the courts have a long history of shutting down genuinely threatening gatherings or political meetings. The First Amendment didn’t stop the state from imprisoning Eugene Debs for an anti–World War I speech or from shooting black student protesters at Orangeburg and Jackson State during the black power era.

But if the promise of free assembly is often and easily broken, why would a democratic state go so far as to officially revoke it? Why, in 2014, did we begin to see the de facto power of state repression made de jure?

In Spain the answer is clear. Seven years after the financial crisis and the collapse of the housing market, unemployment remains near 25 percent (and more than 50 percent for youths.) The Spanish state has proved unwilling and unable to address massive structural problems, and the European Union continues to impose austerity on its fourth-largest member economy. As a result, Spanish people have grown almost completely disillusioned with the possibility of change coming through government. They are increasingly turning to mutual aid, social movements and direct action to get things done.

It might be argued that Spain’s repressive gag law reflects the country’s relatively recent transition from dictatorship to democracy, which began only in 1975. But there was no Generalissimo Francisco Franco in Quebec or Australia. And New York City has technically been a democracy for hundreds of years, no matter how closely it has come to resemble heavily policed city-states such as Singapore and Hong Kong.

The appearance of anti-protest laws in so many countries reveals a general trend in the way governments envision the future. As the state’s utter failure to assist those most hurt by the ongoing economic crisis becomes impossible to ignore and as even the recovery from crisis proves hollow for most people, protests and riots are spreading worldwide, with no sign of slowing down. The politicians and the governments have made their choice: stability and continuity, by any means necessary.

These new laws suggest that the ruling elites are preparing themselves for protracted conflict. Rather than genuflect before the idols of democratic freedoms — or, God forbid, actually attempt to alleviate such widespread social problems as inequality, racist violence and ecological collapse — governments are giving themselves new weapons to crush those who demand change. But once nonviolent marches are punished just as harshly as rioting, will protesters stick to mere demonstrations? Or will they take the streets with more radical ideas about what’s required to win justice?