NOTE: After seven hearings, the Charles County Board of Appeals denied a zoning permit to Dominion Energy to build a large compressor station in a preservation area that would transport fracked gas from surrounding states to the refinery and export terminal in Cove Point for sale overseas. This should have been the end of the process, but Maryland is not only proceeding with its permit process, it stated at the outset that it was inclined to grant the permit and would be looking into federal laws that preempt the county’s decision. On Wednesday, March 28, the Maryland Department of the Environment held its only public hearing on the compressor station.

Dominion Energy has a history of misleading the state of Maryland and the Federal Energy Regulatory Commission during the permit process. For example, Dominion Energy stated during its original permit by the Maryland Public Service Commission that fugitive emissions from the fracked gas refinery and export terminal in Cove Point would be low. As that project neared completion, Dominion Energy sought and won no limits to its fugitive emissions after  it stated that it misrepresented the number of components that would leak by 800%. Dominion Energy also left out 90% of the population when it applied for a federal permit to build the refinery and export terminal in Cove Point to give the perception that it is remotely-sited. In fact, Dominion Energy’s facility in Cove Point is the only one in the world to be placed in a densely-populated community without a buffer zone. There are more than 2,400 homes, 19 in-home daycare centers and two elementary schools within a 2.2 mile radius. For more information, visit WeAreCovePoint.org. – Margaret Flowers

Bryans Road, Maryland – Over the course of three-and-a-half hours Wednesday evening, more than 60 people lined up to speak in opposition to the granting of a draft air quality permit to Dominion Energy Cove Point LNG, a necessary step for the construction of a controversial [fracked] natural gas compressor station in Bryans Road.

The hearing follows a recent decision by the Charles County Board of Appeals not to grant Dominion a special exception to build the compressor station on a 50-acre parcel of land along Barrys Road.

Between 130 and 140 people turned out to observe or participate in the public hearing convened by the Maryland Department of the Environment at the Bryans Road Volunteer Fire Department.

Opponents reiterated a number concerns about the potential effects of emissions from the compressor station, which would be constructed on a 50-acre property owned by Dominion along Barrys Hill Road near the Prince George’s County line.

In particular, residents were concerned about the harm to people and wildlife from the release of toxic chemicals into the air and groundwater through “blowdowns,” or the venting of natural gas in order to clear sections of the pipeline for cleaning or in the event of an emergency.

According to Dominion’s air quality permit application, 100 five-minute blowdowns are scheduled to occur each year, in addition to any emergency blowdowns that may be necessary. 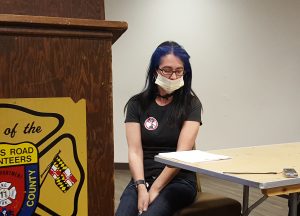 Opponents argued that the models that Dominion used to estimate the dispersion of gas did not reflect the terrain or temperature ranges of the actual site, both of which could affect safe dispersion and result in trapped pockets of gas.

A related concern was the proposed height of the compressor’s exhaust stacks.

Because the compressors draw [fracked] natural gas from the pipeline and burn it in order to operate, the combustion byproducts are vented into the atmosphere after passing through a series of filters designed to trap almost all toxic chemicals.

The height of the exhaust stacks is lower than the required federal standard in order to prevent them from interfering with the uninterrupted view from Mount Vernon across the Potomac.

A lower stack height, opponents argued, would cause exhaust emissions to settle more closely to the station, particularly onto adjacent residential properties and farms.

Because the top of the stacks are below the tree line, emissions could contaminate the trees as well, several people argued.

Many people testified that the chemicals associated with [fracked] natural gas emissions, such as nitrogen oxide, sulfur dioxide and ozone, have been shown to cause respiratory ailments in infants, the elderly and people with compromised immune systems, and can harm fetuses as well.

Residents also testified that they are concerned about the effect that even just the presence of the compressor station will have on their property values and the rural character of the nearby Moyaone Reserve, as well as adjacent private properties that landowners have placed into forest conservation easements to preserve their natural character.

Several people noted that there were differences between Dominion’s original air quality permit application and a revised application that it submitted just a few weeks before the hearing, giving opponents little time to review and absorb the large and highly technical document.

Five people testified in favor of the compressor, citing Dominion’s [talking points about its] use of state-of-the-art safety features in the design and the need to provide [fracked] natural gas to rural residents.

Dominion wants to install two turbines at the compressor station to push a greater quantity of gas through the Cove Point Pipeline to meet an expected increase in demand for [fracked] natural gas from Washington Gas Light Company and Mattawoman Energy.

Several opponents argued that because the Cove Point line ends at the Cove Point [fracked] natural gas export terminal in Calvert County, Dominion was being disingenuous in claiming that gas would be going to WGL and Mattawoman Energy, but would rather be used to export gas overseas.

Others argued against allowing natural gas that had been obtained through hydraulic fracturing, commonly called “fracking,” to flow through pipelines in Maryland, which has outlawed fracking within the state.

The hearing started 30 minutes late to allow everyone time to sign up to speak. Even with additional chairs being set out, the meeting was standing-room-only during most of the hearing.

Aside from applause and occasional cheering for testimony against the station, the evening was largely free of histrionics, as people observed MDE’s ground rules that included keeping signage at the back of the room to avoid blocking people’s view.

The evening’s only drama occurred about 30 minutes into the hearing, when attorney J. Carroll Holzer attempted to supplement his testimony with dramatic video footage of compressor station disasters.

Holzer, who had served as counsel for the AMP Creeks Council at the Board of Appeals hearing, was instructed to turn off the video. MDE staff argued that it was a form of protest signage and could not be entered into testimony, as well as the fact that it did not depict anything specifically related to the proposed Dominion compressor.

Members of the audience shouted in protest, and moderator Shannon Heafey threatened to close the hearing if people did not settle down.

By the end of the first hour, the proceedings fell into a rhythm, with groups of five speakers being called up at a time and everyone adhering to their three-minute times.

The testimony ranged from coldly factual to deeply emotional and heartfelt.

Local resident Emily Canavan pointed out that many of the people in the room had known each other for years, and that they had come to testify out of a common concern.

“Look around the room,” she urged the MDE staff. “We are all here. This is our community.”