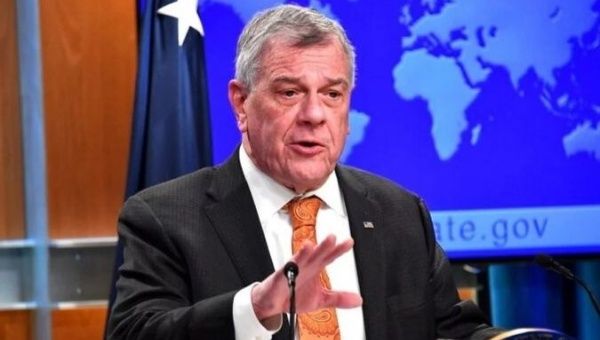 The new acting head of U.S. diplomacy toward Latin America is no stranger to the implementation of interventionist tactics in the region, where for thirty years he learned and perfected the tactics to oust governments.

In par with its belligerent policy towards Latin America, United States President Donald Trump appointed Thursday Michael Kozak as Acting Assistant Secretary for the Bureau of Western Hemisphere Affairs, a U.S. diplomat known for his expertise in regime change.

“Kozak is one of those rare diplomats without fear of using force for what the U.S. considers a noble goal,” journalist and Director of the Andes section of the Associated Press Joshua Goodman tweeted on Thursday.

This comes as Trump warned that with former National Security Advisor John Bolton out he will enforce an even harder policy against Venezuela, Cuba, and Nicaragua, thus Kozak will likely become his ‘go-to-guy’.

The new acting head of U.S. diplomacy toward Latin America is no stranger to the implementation of interventionist tactics in the region, where for thirty years he learned and perfected the tactics to oust governments, a craft that was later exported to Eastern Europe and the former USSR.

Ambassador Michael G. Kozak will be assuming the role of acting @WHAAsstSecty. Ambassador Kozak is a seasoned champion of American values and human rights, with a deep knowledge of the region. He will continue to promote the restoration of democracy to the people of Venezuela.

Kozak, 73, began his work in the 1970s when he worked as a negotiator on the Panama Canal Treaties during the Nixon, Ford, and Carter administrations. He then participated in the U.S. role to downplay the Sandinista revolution in 1978-1979 and was a member of the U.S. mediation team that implemented the Egypt-Israel peace treaty and sought a solution to the Lebanese Civil War.

As many other operatives of regime change under Ronald Reagan and George Bush Sr., he was tasked to push for U.S. interventions in Latin America. Panama’s Manuel Noriega wrote in his memoirs that the two CIA-State Department operatives who were sent to negotiate and then engineer his downfall from power in 1989 were William Walker and Kozak.

In 1991, during his time as Principal Deputy Assistant Secretary of State in the inter-American Affairs Bureau, Kozak proposed six different options to go against General Manuel Contreras, head of the DINA secret police during Augusto Pinochet’s dictatorship in Chile.

The most radical option was to covertly snatch Contreras without the consent of the then democratic Chilean government violating international law and the country’s sovereignty in a bid to distance themselves from the U.S.-backed dictatorship in the name of “human rights.”

Then his path through key nations in the region took him to Haiti. In March 1993, Kozak was a deputy to U.S. Special Advisor Lawrence Pezzullo on issues related to the Caribbean nation and part of the U.S.-backed ousting of Haiti’s first democratically elected president, Jean-Bertrand Aristide.

After that from 1996 to 1999, he served as chief of the U.S. Interests Section in Havana, undermining the Cuban government, especially during the island’s “special period.”

Under Bill Clinton and George Bush Jr., he took his vast expertise in regime change to the former Soviet bloc. In 2000, Clinton appointed him as U.S. ambassador to Belarus, by 2001 he mounted “Operation White Stork” designed to overthrow President Alexander Lukashenko.

During an exchange of letters to The Guardian in 2001, Kozak unapologetically admitted that he was doing in Minsk exactly what he had been doing in Nicaragua and Panama.

“As regards parallels between Nicaragua in 1989-90 and Belarus today, I plead guilty. Our objective and to some degree methodology are the same,” he said.

The strategy repeated in exact detail the tactics the U.S. used to help the Serbian opposition overthrow Slobodan Milosevic, and the Nicaraguan opposition who unseated Daniel Ortega in 1990. Mainly channeling funds to non-governmental organizations, such as the Centre for Applied Nonviolent Action and Strategies (Canvas), to push for regime change from within.

According to leaked internal emails from intelligence firm Stratfor, Canvas “may have also received CIA funding and training during the 1999/2000 anti-Milosevic struggle.” The same strategy which later would be used in the Venezuelan guarimbas and Nicaraguan anti-government protests.

As the Western Hemisphere bureau is responsible for implementing U.S. policy in Latin America, Kozak returns to the region where he learned his trade as a coup master ready to constrict those countries that are not aligned with the U.S.