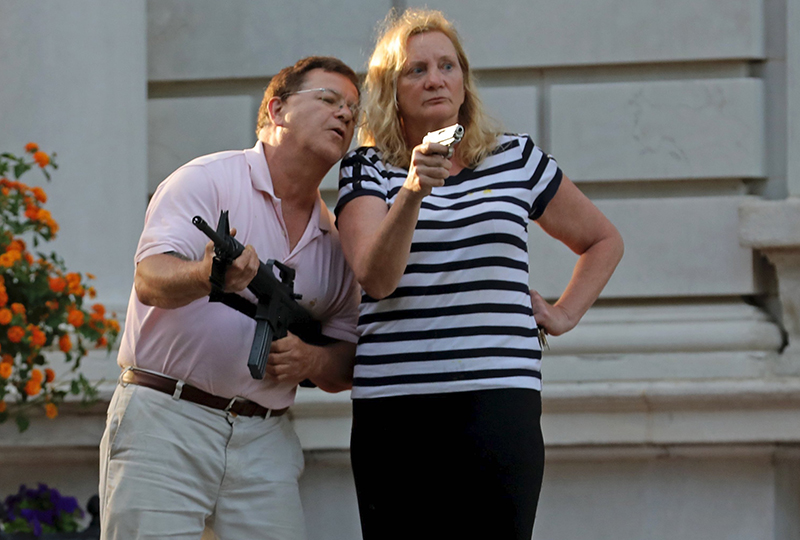 Couple That Pointed Guns At Protesters Charged With Felonies

Mark and Patricia McCloskey, the couple that drew national attention last month after footage of them pointing guns at Black Lives Matter protesters outside their home went viral, have been charged with felony unlawful use of a weapon, The Associated Press reported.

The charges come after investigation circuit attorney Kim Gardner launched a probe into the couple late last month over the June 28 incident.

At the time, the couple, who are white, were seen pointing guns at Black Lives Matter protesters that had been passing their home in a gated community while en route to the home of Mayor Lyda Krewson (D). The protesters had been demonstrating to call for Krewson’s resignation after she read aloud activists’ personal information on a livestream.

As they passed the McCloskeys’ home, however, the couple was seen in now-viral footage yelling and pointing guns at some of the protesters.

They later claimed in an interview with local CBS affiliate KMOV that they pulled out their guns in their own defense and that they were afraid for their lives.

“I was terrified that we’d be murdered within seconds. Our house would be burned down, our pets would be killed,” Mark McCloskey said in the interview.

One of the leaders of the demonstration, Rasheen Aldridge, disputed those claims, saying the protest had been peaceful despite the couple’s actions.

The case around the McCloskeys has only become more publicized as President Trump has come to the couple’s defense in recent weeks, claiming they “were going to be beat up badly if they were lucky.”

“They were going to be beat up badly, and the house was going to be totally ransacked and probably burned down like they tried to burn down churches,” he also said in an apparent reference to arson at a church near the White House.

Amid pressure from Trump and other Republican figures who have weighed in on the incident over the past few weeks, Missouri Gov. Mike Parson (R) has also come to the couple’s defense, suggesting he’d be willing to pardon the couple if they are met with charges.

In an interview this past week, Parson said the McCloskeys, who have a history of suing their neighbors and community members, “did what they legally should do” and added that they “had every right to protect themselves.”

When asked if he would consider pardoning the couple if they’re charged, he said that he thinks “that’s exactly what would happen.”

“Right now, that’s what I feel,” he said. “You don’t know until you hear all the facts. But right now, if this is all about going after them for doing a lawful act, then yeah, if that scenario ever happened, I don’t think they’re going to spend any time in jail.”