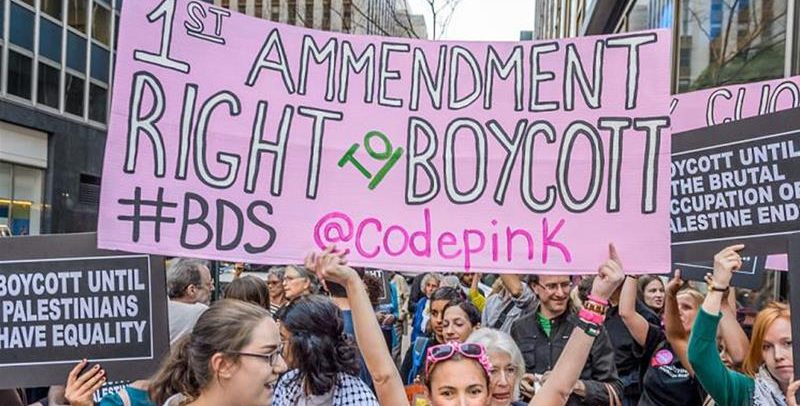 Above photo: BDS was launched in 2005 by more than 250 Palestinian civil society organisations against Israel’s occupation [Al Jazeera]

Phoenix, AZ (Sept. 27, 2018) – A federal court today blocked an Arizona law that requires state contractors to certify that they will not boycott Israel, finding that the law likely violates state contractors’ free speech rights under the First Amendment.

“A restriction of one’s ability to participate in collective calls to oppose Israel unquestionably burdens the protected expression of companies wishing to engage in such a boycott,” U.S. District Court Judge Diane J. Humetewa wrote in today’s order blocking the law. “The type of collective action targeted by the [law] specifically implicates the rights of assembly and association that Americans and Arizonans use ‘to bring about political, social, and economic change.’”

The law, enacted in March 2016, requires that any company that contracts with state or local government in Arizona submit a written certification that it is not currently boycotting Israel and will not do so. The Arizona law is similar to legislation passed in other states. Earlier this year, a federal court blocked a comparable Kansas law, which the Kansas Legislature subsequently amended.

The ACLU filed a case challenging the Arizona law on behalf of an attorney, Mikkel Jordahl, and his one-person law office, which contracts with the government to provide legal services to incarcerated individuals. Jordahl has had a state contract to provide legal advice to inmates in Coconino County Jail for 12 years.

“Boycotts are an important way for people to collectively call for social change and this peaceful form of protest has long been protected by the Constitution,” Jordahl said. “No matter where you stand on the issue of Israel and Palestine, it should be clear that we as individuals have a right to engage in peaceful individual boycotts and a right to not spend our money in the way we choose.”

Because of his political views, Jordahl refuses to purchase consumer goods and services offered by businesses supporting Israel’s occupation of the Palestinian territories. Jordahl intends to extend his boycott to his solely owned law firm, Mikkel (Mik) Jordahl P.C. He also wants to use his law firm to provide legal support to other organizations engaged in boycotts and related political expression, but the law’s certification requirement prevents state contractors such as Jordahl’s firm from participating in these activities.

The Supreme Court ruled decades ago that political boycotts are protected by the First Amendment, and other decisions have established that the government may not require individuals to sign a certification regarding their political expression in order to obtain employment, contracts, or other benefits.

“Political boycotts are a constitutionally protected form of non-violent protest,” said Kathy Brody, ACLU of Arizona legal director. “Today’s ruling supports the notion that the government has no business telling people—even people who contract with the state—what causes they can or can’t support.”

The ACLU does not take a position on boycotts of foreign countries, but the organization has long supported the right to participate in political boycotts and has voiced opposition to bills that infringe on this important First Amendment right.

“Today’s decision sends a strong message to legislators in every state,” said ACLU attorney Brian Hauss. “The right to boycott is alive and well in the United States and state governments should not be trying to use their financial leverage over state contractors to inhibit free speech.”