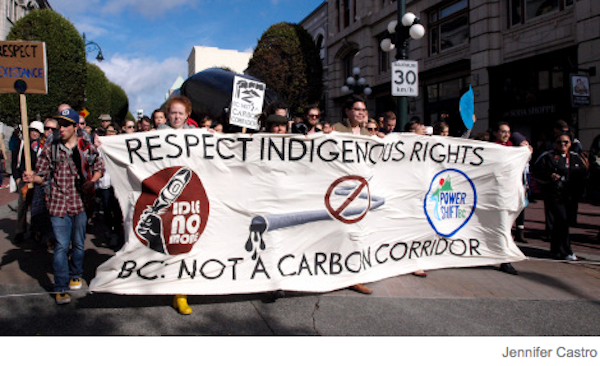 With just one court ruling, the situation of pipelines in Canada has changed in a big way.

On Thursday, the Supreme Court of Canada ruled on a 14-year-old battle over logging rights on Tsilhqot’in Nation territory in British Columbia. Its decision says that any First Nation land that was never formally ceded to the Canadian government cannot be developed without consent of those First Nations who have a claim to it.

To say that this has huge implications for the Canadian oil industry is an understatement. The only thing that stands between Alberta, the province that is the hub of the country’s oil boom, and the Pacific Ocean, which connects Canada to the lucrative oil markets of Asia, is unceded First Nations territory. The Northern Gateway pipeline, which Prime Minister Stephen Harper approved earlier this week, runs along a route that First Nations have already begun blockading, a full 18 months before the pipeline is expected to begin construction.

Harper has claimed a deep respect for Canadians who want to protect their own land, and has blamed most of the agitation against pipelines in Canada on the outside influence of Americans who “would like to see Canada be one giant national park.” This ruling is going to put that respect to the test.

Earlier rulings suggested that the territories that First Nations could lay claim might be quite small. But this Supreme Court decision takes into account the semi-nomadic nature of First Nations cultures — particularly at the time the treaties were first made. First Nations do not need to prove that they have maintained an uninterrupted existence in a particular area — only that they hunted, fished, or otherwise made use of it.

The new ruling is surprising because — in both Canada and the U.S. – present-day courts have often been dismissive of claims based on really old treaties (or the absence of such treaties). In the late ’90s, a family of Lakota  farmers came up with the idea of growing industrial hemp on their reservation in South Dakota. The Lakota had a strong case, but after the U.S Circuit Court ruled against them, the family decided not to take their case any further — fearing that a Supreme Court ruling would further circumscribe the tribe’s autonomy under the original treaty.

Last summer, violence erupted after the province of New Brunswick sold the rights to prospect for energy in unceded territory occupied by the Elsipogtog, to SWN, a Houston-based energy company, against the wishes of the Elsipogtog themselves. The consensus at the time was that, while the concept of “unceded territory” was a romantic one to think about, it would be a tough one to back up in a real-world courtroom.

That said, this decision does have precedent in Canada — including the Calder case in 1973; the addition of an aboriginal rights section in Canada’s 1982 constitutional amendments; and a 1997 Supreme Court ruling that gave First Nations the right to benefit economically from the trees, minerals and oil and gas on, or under, their territory.

There was also an unexpected vote a few days ago by the Vancouver City Council that the city — some of the most valuable real estate in the world — is located on unceded territory. The council declared that it would work with representatives from First Nations to determine “appropriate protocols” for conducting city business.

None of this, of course, means that some First Nations won’t be happy to put a pipeline across their territory, once they feel they’ve been adequately consulted. And Harper still has the ability to override aboriginal title where there is a “genuinely compelling public interest” to do so, and when the override is conducted “transparently and in accordance with the legal hurdles required.”