People living near the docking platform of the Dominion Cove Point terminal were alarmed on Sunday afternoon to see an LNG tanker headed toward the shallows of their beach.

The Shell liquefied natural gas carrier Gemmata arrived February 25–three days early–at the vicinity of the docking platform for the Cove Point LNG export terminal, which is in the commissioning process before starting full operations.

About 4pm, the 290-meter-long Gemmata left the Chesapeake Bay’s northward shipping channel and entered the cove just before its final destination at the LNG terminal’s offshore platform. Then the tanker pulled back out and anchored off the point. It’s still not clear why the Gemmata’s pilot took this course. He either performed a spectacular three-point parking maneuver–with a ship weighing thousands of tons–or simply took a wrong turn.

But, from the point of view of witnesses on the beach, it looked like the massive ship was in danger of running aground in shallow water.

“It looked like it was backing up right onto our beach. I mean, we have never, ever seen a ship this size this close,” Cove Point Beach resident Judy Lemons said. “It was headed north, stopped, then started in reverse. …. I don’t know how close it was, but all I saw was the back of a huge tanker coming through the water toward our house, closer than—I didn’t even know ships could come that close.” 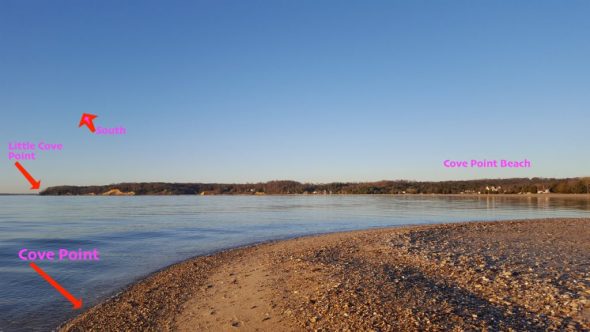 The Gemmata entered the cove south of the offshore docking platform./Photo by Leslie Garcia

Until recently, Cove Point LNG has operated as an import terminal, so nearby residents have seen empty tankers arrive, dock at the platform and depart with their cargoes of supercooled liquefied gas. The Gemmata has a capacity of 34.3 million gallons, but was riding high that day, so likely not carrying a load. The water level on Sunday afternoon was at low tide.

Beach resident Dennis Riley saw the tanker from a different vantage point than Lemons. “That guy’s going to run aground, he’s in a bad spot there, there’s all shallow water,” he said. “And he came up as close as I’ve ever seen a big ship come up. And it looked like he ran aground because he was up so close. He stopped, and then it took him about half an hour to back the ship out of the shallow water. And he got back out to where I guess the water’s a little deeper and just turned it sideways and dropped the anchor down, and he’s still anchored out there right now.”

He believes the captain and pilot “misjudged” and turned too early at Little Cove Point instead of at the larger point just beyond. “They came in, and I just think they were in the wrong spot.” he said. Riley says he has many years of experience navigating the Bay as a recreational boater. 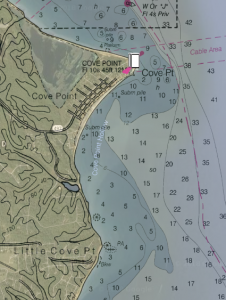 Water depths in feet in the area around Cove Point. The offshore platform is just north of the point.

After the ship dropped anchor, he observed a small boat lowered into the water, which went around to the back of the tanker. He speculates that the crew was inspecting the rudder.

He says that Dominion told him in a phone call that there was no problem, the captain had backed into the cove to turn around. He disputes that the tanker backed in (“I know the difference between the front of a ship and the back of a ship”) and believes Dominion wanted to “defuse us.” (Judy Lemons, from a different location on the beach, says the ship backed in.) The ship, however, was anchored facing north, the direction it was originally sailing.

In spite of the close call, Riley isn’t “overly concerned,” but thinks the ship’s course was “unusual” and should be “looked into.”

“The only thing that bothered me was … running aground is going to make this ship blow up its gas load if he was loaded. Of course, he was unloaded,” he said.

The captain of every commercial vessel engaged in foreign trade that enters the Chesapeake Bay turns it over to pilots from the Association of Maryland Pilots. Bay pilots are specially trained and licensed to navigate the shipping channels north as far as Baltimore. Docking pilots are trained in maneuvering commercial vessels in close quarters with tugboat assistance. Massive LNG carriers must be pushed sideways into a dock by tugboats.

The Gemmata has remained moored off the point, occasionally shifting positions. On Monday morning, it was close to the point, mostly obscured by fog, facing south. On Tuesday morning, it appeared to be closer to the shipping channel, facing north. No tugs have appeared to assist it to the docking platform. According to Marine Traffic, the Gemmata still hasn’t “arrived” at Cove Point LNG. Arrival—possibly meaning docking—is scheduled for February 28.

“Usually they come in, and they wait for the tugs,” Lemons said. “We have seen it one time where they were escorted in by tugs, but we’ve never seen one parked out here like this.” 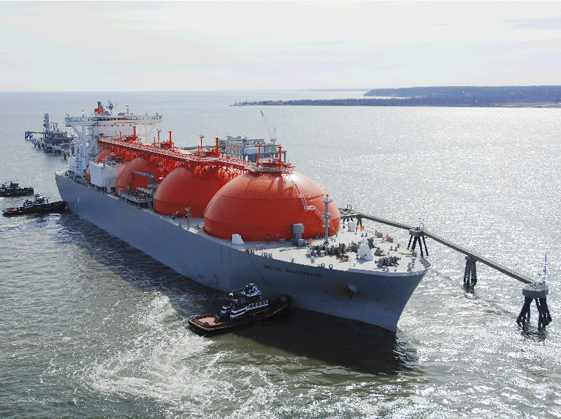 Karl Neddenien, DCP’s media and community relations manager, informed the neighborhood association that the U.S. Coast Guard had authorized the carrier to anchor offshore from the terminal pending docking at the platform. Production of LNG began in late January, he said, and the ship’s arrival was “related to the final commissioning process” for liquefaction at the facility. (Dominion didn’t respond to DC Media Group’s request for comment.)

Shell NA LNG has an agreement with Dominion Cove Point to provide gas for the facility and take LNG produced during commissioning. Once it enters into service, DCP will be only the second LNG export terminal in operation in the United States. The Gemmata is a Shell carrier. (Dominion sold the entire project’s capacity for 20 years to a subsidiary of GAIL (India) Ltd and to ST Cove Point, a joint venture of Japanese company Sumitomo Corp and Tokyo Gas Co Ltd.)

Lemons has faith in the ship’s “gadgets and technology” and in the pilot’s judgment that coming close to shore was “within what was do-able,” but she blames Dominion for keeping them in the dark.

“It’s just for us, sitting here, not understanding what was going on, not knowing what to expect, and to see the back of a ship coming toward you…” she said. “Isn’t it enough that we have to live with the potential danger that’s half a mile away, and then look out on our backyard and see a tanker parked out there, not knowing if it could be an object of terrorism, if it’s disabled, if it’s full of gas, if it’s damaged because it hit a sandbar? Because there’s no information, that’s what so crippling about it.”

LNG itself is not flammable, but with a breach, it can ignite and combust as it evaporates and mixes with oxygen. It’s a matter of contention whether leaked LNG from a tanker will form a vapor cloud and spread fire further distances. One study estimated that an LNG tanker explosion could damage buildings and infrastructure and cause second-degree burns a mile away. A subsequent study found that fires from tankers burned hotter but smaller than previously thought. A Department of Energy report specifies that LNG ports ought to be located at least 2.2 miles from civilians.

Former Assistant Fire Chief Mickey Shymansky, who has more than 3 decades of fire service and a Master’s degree in fire science, thinks emergency responders can’t meet the threats posed by the Cove Point facility or LNG tankers. “The added risk with the tankers is the proximity to the nuclear power plant, and the fact that any fire suppression technique or capabilities are going to be limited,” he said in an interview with DC Media Group.

“The closest fire boat is going to be Solomons — it’s probably about a 25-minute response time. It’s just a lose-lose situation, plus the fact that LNG travels much faster over water than it does land because of its constant expansion rate,” he said.

Another concern is terrorism. Located only 50 miles from Washington, DC, in combination with Calvert Cliffs Nuclear Power Plant 3.5 miles to the north, fully loaded LNG carriers departing from Cove Point could make an appealing target. Tankers are “high interest” vessels, according to the Department of Homeland Security, and it has defined a federal exclusion zone around the offshore platform.

Sam Faddis, a former head of a CIA terrorism unit, has expressed concerns that Dominion Cove Point is wide open to terrorist attack and fears that a LNG tanker, if commandeered on the Bay, would become a “floating bomb.”

In April and May of 2017, there were four incidences of laser strikes aimed at commercial vessels in the vicinity of Cove Point. Lasers can blind or distract pilots, and in the worst case, cause a collision with a smaller vessel in the shipping channel.

The U.S. Coast Guard informed Dominion in 2006 that it would no longer provide “waterside” security for LNG facilities, including Cove Point, although it would remain responsible for the security of LNG tankers in transit. Dominion and Calvert County made a cost-sharing agreement in which Dominion pays the County approx. $1.5 million per year with the understanding that they will provide security for ships. The company underwrites the salary of 11 sheriff’s deputies who do double duty as private “Special Ops” for Dominion and also as County law enforcement officers. Dominion bought two specially designed boats for the team–one a fast interceptor, and another larger one with mounted weapons.

Another vessel, the Methane Spirit, is slated to arrive at Dominion Cove Point on March 30.