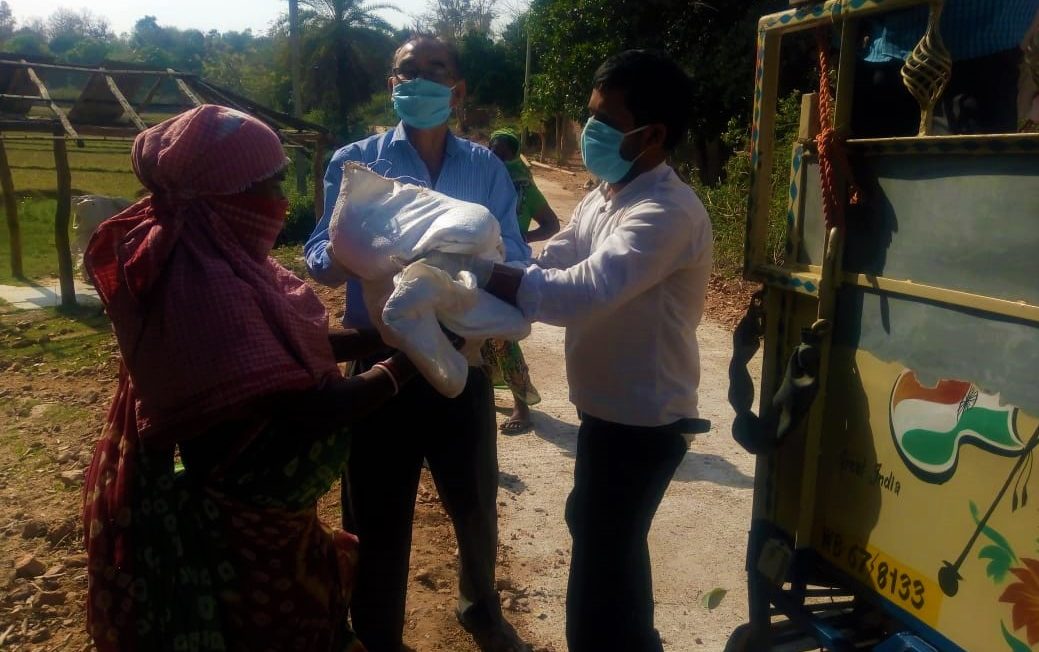 Above photo: PRADAN volunteers distributing food in India, March 2020. With some strategic planning, movement-led community service during the Coronavirus pandemic can be an opportunity to build people power. PRADAN/Paul Tapas.

Crises bring out the worst and best in people, and they do so on a mass scale. Since the beginning of the Coronavirus pandemic, we have seen plenty of toilet paper hoarding and other selfish acts, but arguably even more goodhearted people asking, “What else can I do?” Movement organizers themselves have been asking, “What infrastructure do we have, and how can we pivot it toward crisis response?”

These are important questions to be asking right now, but organizers should take them one step further. Choosing to repurpose one’s movement toward community needs in times of crisis has short- and long-term strategic value. In this article I share a few thoughts about how movements can build power by serving their local communities—immunizing their movements from losing momentum with a “vaccine” of constructive programs and obstructive strategies.

As the first of two prongs of his satyagraha philosophy, Gandhi coined the term “constructive program,” which the Metta Center summarizes as “nonviolent action taken within a community to build structures, systems, processes or resources that are positive alternatives to oppression.” In Gandhi’s case, constructive program involved ashram cooperatives doing a variety of community service work, and people making their own cloth with their own spinning wheels.

The second prong of satyagraha is nonviolent resistance, which some refer to as “obstructive program.” This is action intended to cripple the power of oppression, such as a human blockade or a rent strike against an abusive landlord.

While announcing a new world with constructive program is important, it is incomplete if it does not also denounce the dominant system of oppression that still disturbs the lives of those within and beyond that constructive program. For example, a soup kitchen that does not critically denounce or work against food insecurity is incomplete in its analysis of power and its strategy in ensuring humans have food.

Some examples of constructive program happening during the Coronavirus pandemic include mutual aid networks, virtual communities, and neighborly assistance taking place throughout the world. These charitable actions are important, especially since they are serving people in need but are also attracting newcomers to movements. But many movements are missing the opportunity to, for example, address and curtail the selfishness that capitalism—an economic system whose weaknesses are being laid bare by the Covid-19 crisis, according to progressive political analysts—has exacerbated in society. If constructive program were given an obstructive edge, it would aim to expose society’s inequalities while also creating new alternatives grounded in compassion and human equity.

But how can movements get their hands on this “obstructive-constructive vaccine” to shift popular values and consolidate a larger community committed to establishing a new normal for the world? And what strategic benefits does this approach have for movements?

The use of mutual aid, direct service, and parallel institution-building can expose the inability or unwillingness of the oppressive system to live up to its own book of rules, or even force it to behave according to its own rules. This is what legendary organizer Saul Alinsky called (in allusion to Shakespeare’s Hamlet) “hoisting the enemy by his own petard.”

Before the first registered cases of Covid-19 in Uganda, where I’ve been living since 2009, corrupt politicians forcefully quarantined airline passengers—both Ugandans returning home and foreigners of other nations—in an expensive hotel owned by well-connected business contacts. Those quarantined were forced to foot their own bills, above 100 US dollars per day. Those who bribed their way out of the quarantine were allowed to leave. Those unable or unwilling to pay resisted this petty profiteering and slept on lobby chairs and floors, without mosquito nets. They were not allowed to leave the premises, despite an absence of any Covid-19 symptoms, and were only allowed to buy safe drinking water at four times the typical price.

I joined a group of neighbors nearby who collected water and snacks for those held in this corrupt scheme disguised as a quarantine. We masked up, washed up, and hired a driver to help us deliver the items.

We pulled up to the hotel gate where we were met by armed police and an unidentified man with the Civil Aviation Authority (CAA), who treated us with great suspicion. No hotel staff was present. Seconds later, a police car carrying about five other armed policemen parked behind us. The authorities at the gate were surprised and frantic when we informed them we had brought basic needs for those being held in quarantine. We requested the CAA officer’s number in case we were to return for future humanitarian visits.

As rumors of poor quarantine conditions grew, state authorities convened the very evening of our delivery, March 19, and took steps to get the quarantine to professional health standards on the state’s budget. Our solidarity actions—and the resistance of those being held—exposed the dangers of greedy state profiteering that swallows taxpayer money without offering the services it says it does. And this dynamic successfully pressured the government to change the course of its actions.

Looking beyond the obstructive-constructive “vaccine”

To situate this within the arguments in this post, based on the model of change represented in each kind of transformation, one may draw a rough parallel between:

As for reformative transformation, it aims to “change the fabric of society” bit by bit through organizing around transitional demands from within the system. This kind of transformation can take place in parallel with the two other programs, and it can result from both actions executed outside legal channels (i.e. Rosa Parks’ refusal to obey local law that African-Americans must give up their bus seat to white people) as well as inside (i.e. local or national policy changes).

The Coronavirus pandemic is an unprecedented opportunity to make profound alterations to the DNA of our politics. Organizers must recognize that traditional powerholders will fight and fight to return to the status quo once the pandemic has subsided, because they were benefiting from it comfortably for many years prior to today’s crisis. The center of gravity in our political strategies must shift accordingly.

This is no time for moderate, slow, or purely bureaucratic change navigated through diplomacy. If we struggle nonviolently for revolution, we may win only reform, but if we are merely advocating reform, we may not even attain it. Although reformative transformation is also an important part of social change when taking the long view, reformists—including many lobbying organizations, INGOs, civil society coalitions, and liberal donors—should take greater risks with their heads, hands, and budgets in this moment to support the nonviolent movements at the forefront of this transformation.

The three dynamics of revolutionary, prefigurative, and reformative transformation combined offer a kind of holistic transformative resistance. Approached holistically, with the strategic focus between the three dynamics shifting opportunistically over time, we begin wielding people power from our community service and mutual aid. Such a framework helps us determine how to carry out altruistic actions in a way that connects it back to our pre-pandemic struggles against unjust systems.

May we all continue to serve our communities in this time, and beyond that, approach our care of each other with an extra dose of strategy to permanently shift the system while the window of opportunity is still open.

Phil Wilmot is a former ICNC Learning Initiatives Network Fellow, and co-founder and outgoing director of Solidarity Uganda. He reports extensively on resistance movements and is author of A Wolf Dressed in Sheepskin: A White Guy’s Dilemma in a Ugandan Jail Cell. Phil lives in Uganda and can be reached at phil@wagingnonviolence.org.