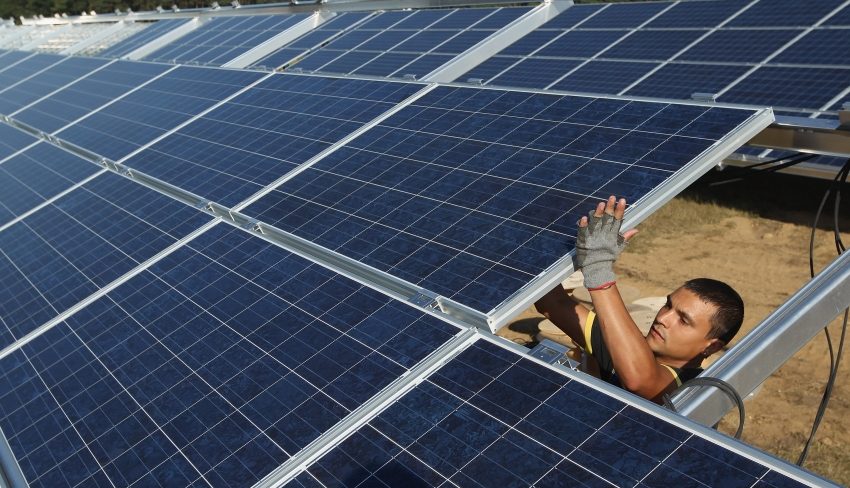 Note: This seems so obvious — we have mass unemployment, and a Green New Deal would create tens of millions of jobs. We have an infrastructure crisis so funding a Green New Deal would remake infrastructure as part of a new sustainable clean energy economy.  We are facing a climate crisis and a Green New Deal’s main purpose is to confront it. It makes so much sense yet neither Trump or Biden support it. The only candidate who does is the likely Green Party nominee, Howie Hawkins, who has put out a detailed plan and budget. Hawkins was the first candidate to run on the Green New Deal in the US during his New York gubernatorial run in 2010. – KZ (Disclaimer – KZ works on the Hawkins campaign)

We can get out of this depression and save the planet all at once.

Our political leaders, Republican and Democrat, are leaving tens of millions of people in free fall. Instead of a guaranteed income and universal, single-payer healthcare, we are offered paltry, one-time checks and unemployment payments (for those who qualify—and many don’t, including all undocumented people). Epidemiologists tell us that people must stay home to curb the spread of the virus—yet, to do so, people need a consistent income, which most cannot achieve from home. We have been offered no road map for keeping bread lines—like the 10,000 families who showed up at a food bank in San Antonio—from growing ever longer.

Even as there are no jobs, work is piling up. For example, any plan to safely emerge from shutdown also requires contact tracing, which involves mass testing to find people who have been infected with the virus, then tracking down and monitoring anyone they have come in contact with. (Such an effort should remain firmly under the purview of public health, with checks to ensure the data is in no way subject to policing, government surveillance or private interests.) By some estimates, adequate contact tracing in the U.S. would require at least a hundred thousand tracers. As no healthcare expertise is required, it would be a perfect job for the presently unemployed.

Which is to say it has become abundantly clear that, to get to the other side of the Covid-19 crisis without leaving a single person behind, we need ambitious social programs like a universal income and a jobs guarantee. If these calls sound familiar, it might be because they are also vital to address a slower-burning but even more catastrophic emergency: climate change.

We are already experiencing some effects of climate change, but if the atmosphere warms beyond 1.5 degrees Celsius above pre-industrial levels, they will be more devastating. A universal jobs program would provide the labor for the urgent transition to renewable energy: cleaning up shuttered coal mines, building robust mass transit systems and energy-retrofitting homes. A guaranteed universal income would provide the means to survive droughts, floods and superstorms to the people most directly affected, in a country where 11.1% of people are food insecure and 40% can’t afford a $400 emergency.

The Green New Deal that emerged from the longtime demands of labor and social movements, and was first championed in Congress by Rep. Alexandria Ocasio-Cortez (D-N.Y.), would create all of these programs and more.

So, why wait to start the Green New Deal? We can implement a universal basic income right now, during the pandemic, when it is desperately needed. A universal jobs program could put people to work testing, contact tracing and checking in on elders—and later be used to build the zero-carbon economy. As proponents of a “green stimulus” argue, even though social distancing creates a limit on physical labor, we can get millions of green jobs “shovel ready,” and the systems in place now to save lives in the coming months and decades.

While wealth is buffering the rich from the effects of these catastrophes, the poor—disproportionately people of color—are bearing the brunt. To ensure the resilience of the working class and to remedy the long-running crisis of inequality, we need to redistribute wealth downward. Instead, thanks to the corporate bailouts in the CARES Act stimulus package, lawmakers have been orchestrating a tremendous redistribution of wealth from the poor to the rich. Republicans are the worse offenders, but Democrats deserve blame for their timidity and incrementalism.

As the circles of the vulnerable and dispossessed expand rapidly and dramatically—with 30 million more people unemployed in April than in March—we need a robust Green New Deal now to get through the current crisis, and mitigate the next one.

Sarah Lazare is web editor at In These Times. She comes from a background in independent journalism for publications including The Intercept, The Nation, and Tom Dispatch. She tweets at @sarahlazare.