COVID19 Brings American Decline Out In The Open

Above photo: Maybe it will get better from here? David Paul Morris/Bloomberg.

Without fixes for infrastructure, education, health care and government, the U.S. will resemble a developing nation in a few decades.

NOTE: Popular Resistance rarely reposts articles from corporate media outlets like Bloomberg News but we thought it was interesting that reality is seeping into the mass media.

The U.S.’s decline started with little things that people got used to. Americans drove past empty construction sites and didn’t even think about why the workers weren’t working, then wondered why roads and buildings took so long to finish. They got used to avoiding hospitals because of the unpredictable and enormous bills they’d receive. They paid 6% real-estate commissions, never realizing that Australians were paying 2%. They grumbled about high taxes and high health-insurance premiums and potholed roads, but rarely imagined what it would be like to live in a system that worked better.

When writers speak of American decline, they’re usually talking about international power — the rise of China and the waning of U.S. hegemony and moral authority. To most Americans, those are distant and abstract things that have little or no impact on their daily lives. But the decline in the general effectiveness of U.S. institutions will impose increasing costs and burdens on Americans. And if it eventually leads to a general loss of investor confidence in the country, the damage could be much greater.

The most immediate cost of U.S. decline — and the most vivid demonstration — comes from the country’s disastrous response to the coronavirus pandemic. Leadership failures were pervasive and catastrophic at every level — the president, agencies such as the Centers for Disease Control and the Food and Drug Administration, and state and local leaders all fumbled the response to the greatest health threat in a century. As a result, the U.S. is suffering a horrific surge of infections in states such as Arizona, Texas and Florida while states that were battered early on are still struggling. Countries such as Italy that are legendary for government dysfunction and were hit hard by the virus have crushed the curve of infection, while the U.S. just set a daily record for case growth and shows no sign of slowing down.

This utter failure to suppress a disease that most other countries managed to contain will have real economic costs for Americans, as fear of the virus drives people back into their homes and businesses suffer. 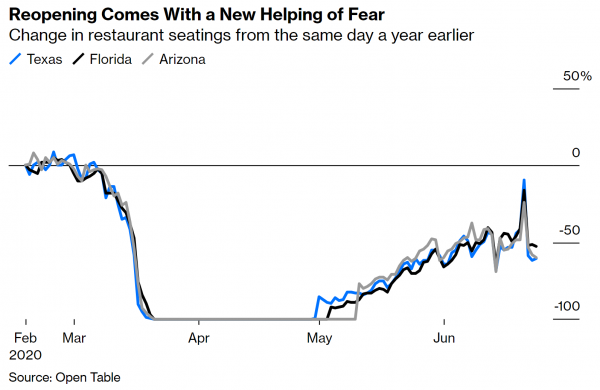 In addition to worrying about their jobs and livelihoods, Americans must now be subjected to months of images of Italians casually walking around on the streets while they cower in  their houses. It’s a painful and stark demonstration of national decline. Even more galling, the U.S.’s Covid failure means that its citizens can no longer travel freely around the world; even Europe plans to impose a travel ban on Americans.

But the consequences of U.S. decline will far outlast coronavirus. With its high housing costs, poor infrastructure and transit, endemic gun violence, police brutality and bitter political and racial divisions, the U.S. will be a less appealing place for high-skilled workers to live. That means companies will find other countries in Europe, Asia and elsewhere a more attractive destination for investment, robbing the U.S. of jobs, depressing wages and draining away the local spending that powers the service economy. That in turn will exacerbate some of the worst trends of U.S. decline — less tax money means even more urban decay as infrastructure, education and social-welfare programs are forced to make big cuts. Anti-immigration policies will throw away the country’s most important source of skilled labor and weaken a university system already under tremendous pressure from state budget cuts.

Almost every systematic economic advantage possessed by the U.S. is under threat. Unless there’s a huge push to turn things around — to bring back immigrants, sustain research universities, make housing cheaper, lower infrastructure costs, reform the police and restore competence to the civil service — the result could be decades of stagnating or even declining living standards.

And a biggest danger might come later. The U.S. has long enjoyed a so-called exorbitant privilege as the financial center of the world, with the dollar as the lynchpin of the global financial system. That means the U.S. has been able to borrow money cheaply, and Americans have been able to sustain their lifestyles through cheap imports. But if enough investors — foreign and domestic — lose confidence in the U.S.’s general effectiveness as a country, that advantage will vanish.

If capital begins to abandon the U.S. and the dollar in large amounts, the currency will crash and Americans will find themselves paying much more for everything from cars to televisions to gasoline to imported food. Interest rates will be raised in an attempt to lure back investment capital, and the country might undergo a period of stagflation worse than the 1970s. Large-scale unrest would undoubtedly result and — in the worst-case scenario — the U.S. could collapse like Venezuela.

This is an outcome to be avoided at all costs. But it’s an outcome that is no longer out of the realm of possibility, thanks to the complacency, arrogance and misplaced priorities of U.S. leaders and the deep and bitter divisions among U.S. voters. If the U.S. goes from rich, world-straddling colossus to floundering dysfunctional developing nation in just a few decades, it will be one of the most spectacular instances of civilizational decline in world history. Every mind in the country should be bent towards the task of reversing the decline and restoring national competence.

Noah Smith is a Bloomberg Opinion columnist. He was an assistant professor of finance at Stony Brook University, and he blogs at Noahpinion.