The spread of COVID-19 through Michigan’s K-12 schools is rapidly accelerating, with the number of new outbreaks rising for the third week in a row, according to data released by the state yesterday. Last week, there were 29 separate outbreaks affecting 107 students, teachers and school workers, making it the most infectious week in Michigan since the school year began.

The 29 new outbreaks last week are in addition to 70 other “ongoing” outbreaks, defined as outbreaks that have been reported more than a week ago, but which have at least one new associated case in the last 28 days. Altogether, the 99 total ongoing outbreaks have led to 482 reported cases of COVID-19 among students, teachers and staff. Family members and other community members not employed by schools are not counted. 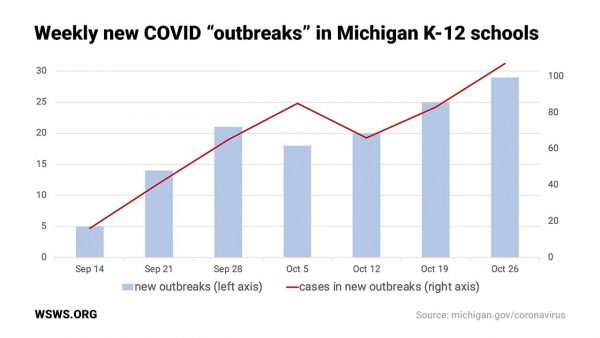 It must also be pointed out that Michigan defines an “outbreak” at school as “two (2) or more COVID-19 cases who may have shared exposure on school grounds and are from different households.” When only one case is discovered, the state does not report it as an outbreak or include it in school totals, thereby undercounting the spread of the pandemic and withholding vital knowledge of COVID-19 cases from parents, students and teachers.

For example, one student at Woodhaven High School in Brownstown, Michigan, was reported by the school district last week to have COVID-19, sending at least 30 teachers, students and staff into quarantine. The figures are published on the district’s website, but no outbreak will be recorded by the State of Michigan.

The 107 people infected in outbreaks at Michigan’s K-12 schools last week include 18 at preschools and elementary schools, another 18 at middle schools, and 71 at high schools. In their reporting of cases, the state does not say whether those infected are staff, students or teachers.

The reported outbreaks took place in schools throughout the state, indicating the entrenched character of the pandemic, which has now spread to more rural areas. The largest outbreak last week has infected 10 people at Breitung Township Schools in Dickinson County, located in Michigan’s rural Upper Peninsula. The UP overall has been hit hard, with further outbreaks at schools in Gogebic, Houghton, and Marquette counties.

Since reporting began in mid-September, 132 separate outbreaks have been reported at K-12 schools in Michigan, and the rate of spread is accelerating. Since the beginning of October, the weekly rate of outbreaks in the state’s schools has risen steadily from 18 per week to 29 per week at present.

Michigan is among the over 40 US states experiencing rising COVID-19 infections, including 10 that have seen their highest numbers since the pandemic began. The seven-day moving average for new cases in Michigan is now over 2,000, its highest level ever, and COVID-19 hospitalizations have spiked 80 percent statewide in recent weeks.

Last week, leading physicians representing 110 of Michigan’s 137 hospitals warned in an open letter, “If Michigan doesn’t change its approach to this disease,” there is a danger of “exceeding the capacity of our hospitals as we did in Southeast Michigan this past spring.” This warning invokes the gruesome scenes from April, when Detroit’s Sinai-Grace Hospital, completely overwhelmed by coronavirus cases, resorted to piling the dead one on top of another in unrefrigerated rooms.