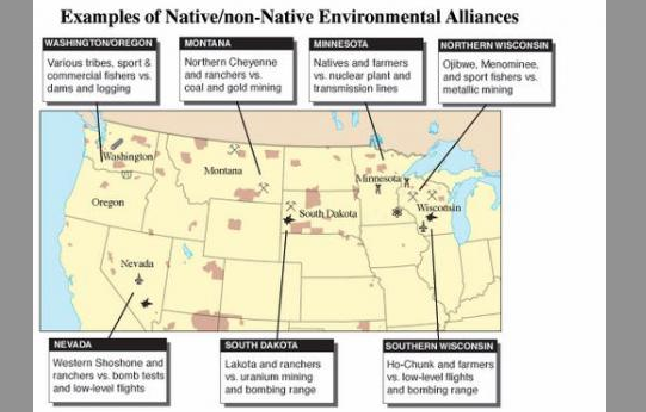 The Cowboy Indian Alliance may seem like an unprecedented type of environmental movement–multiracial, rooted in struggling rural communities, and often more effective in its grassroots organizing than traditional urban-based white upper/middle class environmental groups–but it is also part of a long, proud tradition that has been conveniently covered up in American history.

It’s not everyday you see cowboys helping to set up a tipi encampment, but that’s what is happening this week on the National Mall. An unlikely alliance of white ranchers and Native American activists, known as the Cowboy Indian Alliance, has erected the tipi encampment in the nation’s capital to protest plans for the Keystone XL oil pipeline. The Alliance (with the ironic acronym ‘CIA’) brings together Native Americans with white ranchers and farmers–the archetypal enemies of the American West–to protect their common land and water.

The Cowboy Indian Alliance may seem like an unprecedented type of environmental movement–multiracial, rooted in struggling rural communities, and often more effective in its grassroots organizing than traditional urban-based white upper/middle class environmental groups–but it is also part of a long, proud tradition that has been conveniently covered up in American history. Our history books present Manifest Destiny as inevitable and uncontested in the 19th century, so we never read about the white Wisconsin settlers who opposed the forced removal of Ho-Chunk and Ojibwe, the Washington settlers put on trial for sympathizing with Coast Salish resistance, or other atypical stories that highlight the “paths not followed” of cooperation rather than conflict.

Since at least the 1970s, unlikely alliances have joined Native communities with their rural white neighbors–some of whom had been their adversaries in treaty rights conflicts–to safeguard their local environment. These unique convergences have confronted mines, pipelines, dams, logging, power lines, nuclear waste, military projects, and other threats to Native peoples and white ranchers, farmers, and fishers. I was involved in groups such as the Black Hills Alliance in South Dakota and the Midwest Treaty Network in Wisconsin, which stopped the world’s largest mining companies, by bringing together Native and white communities that had previously been at odds over natural resources.

These alliances not only joined Natives and non-Natives to confront an outside threat as a common enemy, but also shifted the consciousness and actions of the white participants, as they learned about the continuity of Indigenous cultural traditions, legal powers, and environmental sustainability.  Ironically, the areas of the most intense treaty conflicts developed the earliest and strongest tribal environmental alliances with white farmers, ranchers, and fishers. As the tribes strongly asserted their rights, they left an open door to their white neighbors. They knew that if they continued to argue over dividing the fish or water, there may not be any left to argue over.  So they instead came together to protect the sacred resources, as we saw this week in an agreement between tribes and white farmers to overcome their longstanding water rights conflict in the Klamath Basin of Oregon and California.

In the second decade of the 21st century, new ‘unlikely alliances’ of Native peoples and their rural white neighbors are standing strong against fossil fuel and mineral extraction throughout the continent. In some areas where tribal governments protect the local environment, white residents have begun to see them as more effective guardians of common ground than their own local, state, and federal governments. Using their sovereign powers and federal trust responsibility, tribal nations can draw federal agencies and courts into the fray in a way that local and state governments cannot, and Indigenous people offer a strong cultural anchor to the movement that makes it less willing to compromise. Tribes cannot simply move away from risks or shift their treaty harvesting areas, because they are fixed in place, in their ancestral territory.

Here is a rundown of some of ongoing unlikely alliances between Native Americans and rural whites:

In the Pacific Northwest, Native nations are using their treaty rights to slow plans for coal and oil trains, partly because shipping and burning fossil fuels threatens their treaty fishery. Washington tribes not only won the 1974 Boldt treaty rights case, but used it to co-manage the fishery with the state government, and to protect and restore critical fish habitat. The same fishing groups that used to protest treaty rights now view the tribes as the only governments with the will to protect the fishery from harmful development and climate change.  With the help of local environmental groups, the Lummi Nation is opposing a coal terminal in a sacred burial ground and critical fish habitat, and the Quinault Nation is opposing plans for Bakken crude oil terminals that threaten salmon and shellfish harvesting. Washington tribes have joined with British Columbia First Nations in opposing oil pipelines from the Alberta Tar Sands, as Columbia River Basin tribes block megaloads of equipment being shipped to Alberta.

In Montana, Northern Cheyenne tribal members are at the forefront of the movement to stop the proposed Otter Creek coal mine, at the other end of the of the rail line from Washington state. They have been joined by white ranchers in the Tongue River Valley, just like they were in the 1970s when they used tribal environmental laws to slow down the first round of coal development. Northern Cheyenne organizer Vanessa Braided Hair observes that the Arch Coal company ‘doesn’t understand community. They don’t understand the fierceness with which the people, Indian and non-Indian, in southeastern Montana love the land.’ Rancher Roger Sprague says of the Northern Cheyenne, ‘We’re neighbors with these people, and we’re proud to work with these people. We don’t want this mine in here… It’s our life. We’ve fought hard to put it together, and we’d like to keep it that way.”

In Wisconsin, Bad River Ojibwe, who are fighting to stop iron ore mining, have been joined by non-Native neighbors; meanwhile, Ho-Chunk and local residents are protesting frac sand mining. As recently as the early 1990s, many Wisconsin white sportsmen were protesting Ojibwe treaty rights to spear fish. But the tribes presented their treaties as a legal obstacle to mining plans, and formed alliances such as the Midwest Treaty Network. Instead of continuing to argue over the fish, some white sportfishing groups began to cooperate with tribes to protect the fish, and won a key 2003 victory by stopping the proposed Crandon copper-zinc mine. Racism is still alive and well in Wisconsin, but the organized anti-Indian groups have lost their mass following. As Mole Lake Ojibwe elder Frances Van Zile said, ‘This is my home; when it’s your home you try to take good care of it…including all the people in it.’

In South Dakota, the ‘CIA’ is only the latest incarnation of alliances that previously fought a coal railroad and stopped a Depleted Uranium munitions testing range. Similarly, the Black Hills Alliance halted uranium mining plans in the early 1980s, joining Lakota tribal members and white ranchers to protect their groundwater (and as the uranium companies have returned in the 2010s, it has been reborn as the Black Hills Clean Water Alliance). Rancher Paul Seamans, chair of Dakota Rural Action, told me recently that the Lakota “feel the government should step up and do what’s right by them on the 1868 Treaty… They’re not after the deeded land. They would like the government to recognize that they’ve been screwed, and…to have the federal and state lands back…After being around them and listening to their point of view, I get to thinking, ‘hey, if I was Indian I would be doing the same exact damn thing that they’re doing.'”

In Nebraska, the pipeline company TransCanada tried to buy off some ranchers and farmers by moving the Keystone XL route away from their lands – but they have not given up the fight, and continue to work with others who are still directly affected, including Native communities. Farmers and ranchers opposed eminent domain seizures by stressing their right to private property, which of course originally were homesteads stolen from the tribes. As a result, tribal leaders insist that their allies not only fight the oil pipeline, but also become stewards of the land and help to protect sacred sites on their property. Ranchers have even visited the spiritual camps that tribal leaders have set up for prayers to protect the land and water. In a meeting to form the new ‘CIA,’ Bold Nebraska director Jane Kleeb remembered ‘that moment one of the ranchers stood up and said: `I finally understand how you feel having your land taken away,’ and one of the tribal leaders stood up and said `welcome to the tribe.’…There was this amazing connection… We’re all in this together in the fight.’

The Cowboy Indian Alliance represents not only a common stand against an oil pipeline, but (like previous alliances) has become a way to build connections between land-based communities that last beyond the immediate threat of oil spills and climate change. Equally important, these unlikely alliances  begin the process of decolonizing Native lands and shifting white hearts and minds. Ihanktonwan Nakota elder Faith Spotted Eagle, a leader in past and current alliances to protect treaty lands, concludes, ‘We come from two cultures that clashed over land, and so this is a healing for the generations.’

The Cowboy Indian Alliance will be livestreaming and documenting its actions through Saturday, April 27 at rejectandprotect.org

[Dr. Zoltán Grossman is a Professor of Geography and Native Studies at The Evergreen State College in Olympia, Washington. He is a longtime community organizer, and was a co-founder of the Midwest Treaty Network in Wisconsin. He is currently working on a book about rural Native/white alliances for the University of Washington Press. He was co-editor of Asserting Native Resilience: Pacific Rim Indigenous Nations Face the Climate Crisis (Oregon State University Press, 2012). His website is http://academic.evergreen.edu/g/grossmaz ]