By Laura Peterson, Desmogblog.com
December 4, 2019
| Educate!
Creating A New Market For Coal In The Push To Mine ‘Critical Minerals’ For National Security2019-12-042019-12-04https://popularresistance-uploads.s3.amazonaws.com/uploads/2017/12/popres-shorter.pngPopularResistance.Orghttps://popularresistance-uploads.s3.amazonaws.com/uploads/2019/12/duke-1985-coal-ash-pond_credit-waterkeeper-alliance_creative-commons.jpg200px200px

With the backing of the mining industry and anti-regulatory groups, the Trump administration has been seeking to expand mining on public lands and further loosen environmental rules under the banner of weaning the United States off importing minerals deemed “critical” to national security.

This move may have particular implications for the struggling U.S. coal industry and its promoters, which have begun rallying behind efforts to extract some of these so-called “critical minerals” from coal and its by-products.

In 2017, President Trump issued an executive order demanding “recommendations to streamline permitting and review processes” for “critical minerals.” The current government list of critical minerals includes a group of rare earth elements often abundant in the waste materials from mining coal and hardrock minerals like phosphate, as well as in the coal ash produced from burning coal. But while the technology to pull these elements from such mining waste is not yet economically viable and can generate its own toxic pollutants, some see the push for it as a guise for justifying further mining.

“You’ll never make money at it,” said Kevin Ashley, a retired mining engineer and former energy policy advisor. “It’s an academic exercise that allows some people to say, ‘This is why we need to continue mining coal; so we can produce more coal ash.’”

Rare earth elements — which are not actually rare — describe a group of 17 “relatively abundant” minerals used for a wide range of technologies and products, from cell phone screens to  high-power magnets to oil refining. The U.S. imports most of these elements from countries with larger deposits, including China and Russia, and Trump’s trade war with China has recently raised concerns about the nation limiting rare earth exports to the U.S.

The idea of extracting valuable minerals from coal and its waste predates the Trump administration. Coal-state politicians and industry groups such as the American Coal Ash Association have pushed the federal government to fund reports and studies on how to make the process more viable. The idea picked up some traction when Kentucky Congressman Hal Rodgers added legislative language to a 2014 spending bill directing the Energy Department to produce an “analysis of the feasibility of economically recovering rare earth elements from coal and coal byproduct streams.”

The resulting report concluded that technologies for separating rare earth elements from waste products were not yet advanced enough to be economically viable. The report also pointed out a number of environmental concerns associated with the process, such as toxicity of chemicals required for extraction, and resulting concentration of radioactive compounds like thorium.

Yesterday, @Interior @SecretaryZinke signed an order to expand critical minerals production to advance American energy and mineral dominance and strengthen our national security, and we’re pumped about it. pic.twitter.com/5VGWUyjkoA

But Trump’s entry into the White House provided these efforts with a shot of adrenaline. In addition to executive orders and other actions to increase mining activity, the Interior Department’s Bureau of Land Management issued a prospective rule in October that would lower fees and royalty rates for companies mining critical minerals from public lands.

Despite the political push for new mining activity, a 2018 Chemical and Engineering News story says most research to recover rare earths from coal is focused on wastes, though there are some efforts to use coal itself. “The reason we are using the lignite, the coal itself, is because the rare earths are tied up in such a way that they are easy to get out,” said Dan Laudal of University of North Dakota. He also noted that using this feedstock yields “cleaner-burning, more-efficient lignite as a by-product, which can then be sold for fuel.”

At the request of Trump’s Secretary of Energy Rick Perry, the National Coal Council prepared a pair of reports which call for the revival of the floundering coal industry in part through “alternative uses” of coal, such as for rare earth elements and other “critical minerals.” The 2019 report, “Coal in a New Carbon Age,” specifically says this application, if the minerals are found in sufficient concentrations, “will create a new market for materials produced by coal mining operations.” 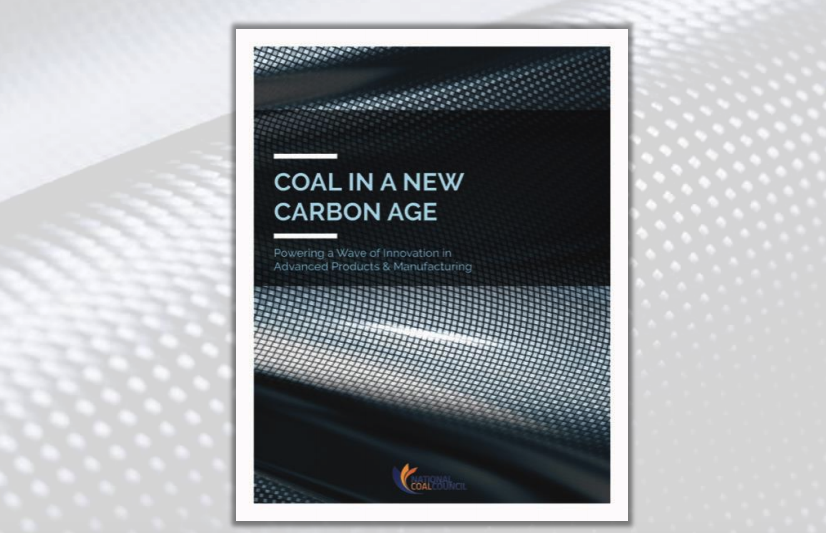 The cover of the National Coal Council’s 2019 report “Coal in a New Carbon Age.”

The council’s 2018 report, “Power Reset,” is focused on the coal power fleet. That report notes, “While [rare earth elements] are used in relatively small volumes, they could provide a secondary source of revenue for coal mines, or slightly boost consumption, which could potentially lower fuel costs and thus benefit the competitiveness of the existing fleet.”

The National Coal Council is a federal advisory committee funded by its sponsors, investments, and members. These include a number of coal interests, from mining and power companies to coal-reliant states like Montana and industries like steel and rail.

A notable member of the council is Fred Palmer, a longtime coal industry employee and lobbyist who began one of the very first fossil fuel–funded campaigns targeting the public understanding of climate change. Palmer now works for the climate science denial group the Heartland Institute and serves as the National Coal Council’s New Markets for Coal Subcommittee Chair. He contributed to both the 2018 and 2019 reports.

Anti-environmental, free market groups like the Committee for a Constructive Tomorrow (CFACT) have made “mineral independence” from China and Russia a national security goal, which mining companies seeking a lighter permitting process have been happy to endorse.

The Committee to Unleash Prosperity (CUP), a nonprofit organization that advocates for free markets and low taxes, issued a report in 2018 titled, “An ‘America First’ Critical Mineral and Mining Strategy.” The report, while taking shots at environmental groups, argues that the United States needs to increase domestic mining on public lands — principally by loosening the permitting process — and decries U.S. dependence on China and Russia for “critical minerals.”

CUP does not list its donors, but its board of directors boasts conservative luminaries like Andrew Puzder, President Donald Trump’s one-time nominee for Secretary of Labor, and Stephen Moore, who founded the right-wing political group Club for Growth and is a fellow with the ultra-conservative Heritage Foundation. In May, Moore signed a letter asking Congress to kill the electric car tax credit, a letter sent by a coalition of free market advocacy groups with funding and ties to the billionaire Charles Koch’s oil refining and petrochemical empire.

The report downplays any risks associated with rare earth extraction, claiming the only thing trapping the rare earths in their phosphate rock is big-government regulation.

“If burdensome thorium regulations were eliminated, miners could, under controlled conditions, process waste rock for thorium and especially for rare earth minerals, which would enable the mining industry to go head-to-head with Chinese rare earth suppliers,” the report states. Thorium, a radioactive metal, is regulated by the Environmental Protection Agency, and generally buried along with other waste products by phosphate miners.

One of the “experts” quoted in the CUP report is Daniel McGroarty, head of the nonprofit American Natural Resources Network. According to its website, the network was established to “inform the public how dependent America is on other nations for minerals and metals that exist here,” and “encourage the exploration of key minerals and metals beneath our home turf.”

Though the network does not disclose its funders, the website identifies the organization as “A Carmot Strategic Venture.” The Carmot Strategic Group is McGroarty’s public relations firm, which he runs alongside his gig as a lecturer at George Washington University. The firm has one other employee besides McGroarty: Sandra Wirtz, who previously worked for a project of Americans for Tax Reform and the Heartland Institute.

According to his bio, McGroarty is a senior consultant for international mining company Rio Tinto, and “serves on the advisory boards of Carmot’s Critical & Strategic Metals portfolio: Texas Rare Earths Resources, Graphite One Resources, and American Manganese.”

All three companies focus on  “critical minerals.” American Manganese recycles minerals from lithium-ion batteries. Graphite One is developing a graphite mine in Nome, Alaska, that Alaska Governor Michael Dunleavy asked President Trump to fast-track under another 2017 executive order that expedites environmental reviews for “high-priority” infrastructure projects. (Neither lithium nor graphite fall in the rare earth category but are on the federal “critical minerals” list.)

Texas Mineral Resources is the principal developer of the Round Top rare earth mining project in Texas. It is also one of several companies who have received grants from the U.S. Energy Department and Defense Logistics agency to create a process for extracting multiple rare earth minerals from coal waste products in Pennsylvania. The most recent grant would fund an installation in Pennsylvania developed in a consortium with Penn State’s Center for Critical Minerals.

“Pennsylvania coals and coal-associated products have the highest concentrations of these rare earth elements and critical minerals in the U.S.,” said center director Sarma Pisupati. “Penn State is well positioned to play a vital role in helping industrial partners here in the state.”

Trump praising Australia’s environmental record in mining for critical minerals and for ‘leading on coal.’ pic.twitter.com/yS65RqCs0E

Where the coal industry previously cast the use of rare earth elements in renewable energy technologies as a weakness compared to coal power, the National Coal Council’s 2019 report now boasts of coal’s potential as a source of those elements for wind and solar power.

A 2019 Department of Energy fact sheet perhaps boils down the coal and critical minerals connection to its most obvious. Along the bottom of the document,  which touts a new program’s accomplishments toward domestically recovering rare earth elements, is the tagline: “Creating new jobs, products, and markets for coal.”