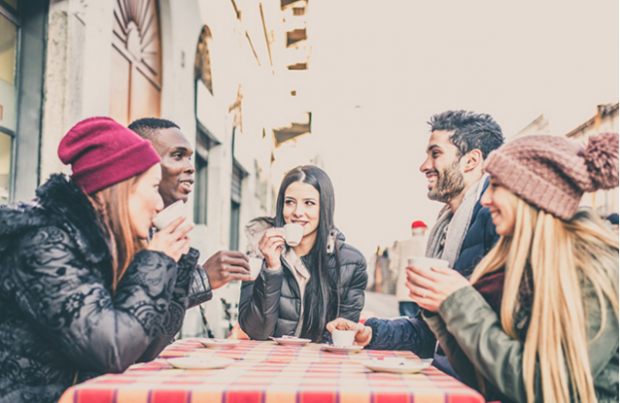 Above Photo:  Group of Friends via Shutterstock

As I dream about the possibilities for 2016, I believe we are uniquely positioned to engage more people in social movements than at any point I’ve seen in the last decade. During the past two years we’ve witnessed a brilliant escalation of our justice movements to build and sustain the level of direct action needed to win incredible and unprecedented victories. There is actually public conversation beyond activist and organizer circles on discriminatory policing, state violence against Black communities, and homophobic and transphobic violence. As an organizer and consultant, I’ve had the opportunity to work with many Black-led organizations, people of color organizations, LGBTQ groups and grassroots groups around the country. In almost all of these groups, I’ve witnessed people entering our movements and engaging in incredibly impactful actions.

However, the people we’re attracting are often already interested in political work. Meanwhile, so many directly impacted people are still waiting for someone to ask them to get involved. There are people who have questions and are waiting for our responses. There are people who have yet to be invited into our meetings, conversations and actions. As I think about the next year, I’m contemplating the idea: What if we saw every barbershop, hair salon and laundromat as a site of political engagement?

A few months ago, I was at the hair salon getting a trim. As I was sitting under the dryer, the news came on, discussing a march against police violence that had recently happened in Manhattan.

“This shit is ridiculous!” one of the hairdressers said to her client.

They began a long conversation about how having a Black president doesn’t mean that there’s been a reduction in anti-Black violence. I was in a lovely non-political, non-social justice daydream about a new lover of mine. I also knew I was in a perfect moment for an organizer, a precious chance where relationship building was actually being handed to me. I paused my daydream, pushed up the hair dryer, moved my dripping hair away from my eyes and grabbed for flyers on the forum I was coordinating on anti-Black violence and Black-led organizing. We had a great conversation on the failings of traditional Black civil rights organizations. I let them know about different groups around the city and registered some of them for an event on Black-led organizing that I was coordinating. This is one simple form of relationship building: recognizing an opportunity and utilizing it to deepen an individual’s political engagement.

Relationship building, also known as base building, is a series of activities designed to introduce, engage and keep people involved in our movements. The strategies can vary from outreach to strangers on the street, to presentations with community organizations, to house parties where folks invite their friends over to discuss political issues. Relationship building doesn’t even have to happen in person anymore. In the ever-expanding world of social media, there are many, many more ways for us to meet and engage each other; however, I believe the same principles of being consistent, speaking to the needs and interests of the community, and going beyond our usual networks apply.

The key to creating viable alternative systems of justice is in relationship building.

I should come out as an old-school organizer. I’ve doorknocked and conducted street outreach, nightclub outreach, welfare center outreach, outreach at LGBTQ pride events, outreach in parks, and outreach to probably over 10,000 people at this point. From this vantage point, I believe that community engagement and relationship building are the cornerstones of our movements. Our movements have a serious problem of sustainability. We burn out, some of us leave and the rest of us keep organizing. In these exhausted states, we traumatize each other and activate unhealed wounds. Relationship building gives us the connections and trust that we need to support each other when times get tough. Strong, deliberate relationship building allows us to infuse our movements with new people, new ideas and new energy.

How does relationship building work?

Relationship building can seem huge and daunting; sometimes it’s annoying and interrupts our routines. It also is a vulnerable act, and leaves all of us open to the possibility of experiencing rejection. Recognizing this, I’m offering some ideas that would work both for folks in formal organizations and for individuals.

This is the start of the process and the place where we meet the person. Engagement can occur in formal activities such as door knocking or street outreach. It can be as simple as introducing ourselves to our neighbors, attending community meetings and having conversations with the store owners near us. The basic idea is that we need to meet people and make space for conversations about our lives, experiences and desires for justice.

Some of our pitfalls with engagement are about testing politics. We develop rigid expectations, and conduct conversations with newly engaged activists in which we’re trying to find out if the person has the “right” politics, or if they are a “good” or “bad” person. However, in order to build stronger movements and stronger communities, we’re going to have to stop sizing each other up based upon short interactions. We’re all works in progress, and therefore we’re going to have to make space for political transformation.

Another pitfall is not being open to real conversations. Instead, we default to one-sided interactions in which we tell people what their perspectives should be. We have to be open to have conversations and engage with new ideas, new people and new perspectives. This openness gives us space for creativity, the lifeblood of our movements.

This is a challenging step. It’s about moving someone from a conversation to a part of a movement and/or community. To do this well, we have to provide focused, individual attention. We have to ask ourselves, “How can we support this person in getting access to spaces that meet their interests and needs?” This can be as simple as inviting someone to a discussion, event, meeting or action. The crucial step is that after we invite the person we need to take time to have a conversation with them, and listen to their perspective. Were there things they loved, hated, agreed with or didn’t understand about the event?

Activation also requires patience. It can take a while, even years, to activate someone. I once engaged with a community member, Renee, who is now someone I consider a second mom. I basically called Renee and had phone conversations with her once a month for a year. I learned her birthday, her kids’ names, her struggles and her triumphs. One day she finally showed up at the organization I was working for, looking for me. She said, “I figured that I might as well show up, since you’d invested so much time into me.” She became an active member of the organization, and eventually became the board chair.

A critical factor in building relationships is to ask what folks desire and need out of their movement-building work. Most people are getting involved with a desire for change, but they also may need computer access or help writing a resume. There are folks who have a desire to learn about the history of social justice movements, or just the history of politics in their neighborhoods. In our political formations, but also within our individual interactions, we have to support each other’s growth with the belief that our movements hold the dual responsibility of societal transformation and meeting immediate community needs.

Sometimes we go through all the steps and the person just doesn’t stay involved. At times, that’s just going to happen. However, sometimes it can be prevented, and it’s worth preparing for the reality that it can be really hard to be consistently and actively involved in movement work. All of us experience obstacles to sustained involvement. We have limited time, folks have to focus on their jobs, people may need to take care of family, and not everyone is physically able to show up in person. Therefore, it’s not enough just to commit to building relationships; we have to maintain them. We have to check in on people, hold them accountable to their commitments, have compassion for all the ways that our people may show up, find creative ways to keep people involved in the work despite the obstacles, and keep engaging with them, because our love for our people is that strong. As an individual, this can mean repeatedly showing up to the barbershop with flyers and a desire for political conversation. In formal organizations, this can look like a process of calling, emailing or texting formerly active volunteers to see how the organization can support their involvement.

Relationship building calls us to really think about what we’re building and not just what forms of oppression we’re organizing against. It forces us to present a concrete vision of change in short, precise and accessible language. I believe that relationship building is one of the only routes toward actually creating viable alternative institutions to address harm in our communities. As we work against state violence, community harm and violence continues. We will never be able to rely on each other in the aftermath of violence or harm if we intend to stay in small pockets of communities that are unable to engage with non-politicized folks.

Therefore, if we need to hold someone accountable for community harm, it helps if we have a relationship with them, their family, their workplace and their community. If we need to rely on someone in the midst of violence to care for us, it helps to have a relationship that predates that interaction. If we want to divest from the police or abolish the prison system, we need to nurture relationships so that we have existing bonds that we can rely on to create new liberatory institutions. We have to deeply invest in our relationships, and not just the relationships between those of us who already know each other or agree with each other, but also those between everyone who has a stake in our collective liberation.

So here’s what I’d love to leave in 2015: empty calls for abolishing prisons and policing, and for transformative justice, without the strategies or community relationships needed to support these visions. Abolition and transformative justice are each in themselves robust areas of work with long histories and deep communities of activists and organizers practicing these strategies. When we claim these strategies without building the necessary relationships, it feels like we’re a community of people draping ourselves in our politics, attempting to use radical language to show how attractive we are while not actually making the changes we need. The key to creating viable alternative systems of justice is in relationship building. That means meeting individuals where they are, and building forward from that place – the barbershop, the salon, the laundromat, the doorway – where we come together as people and have a conversation.