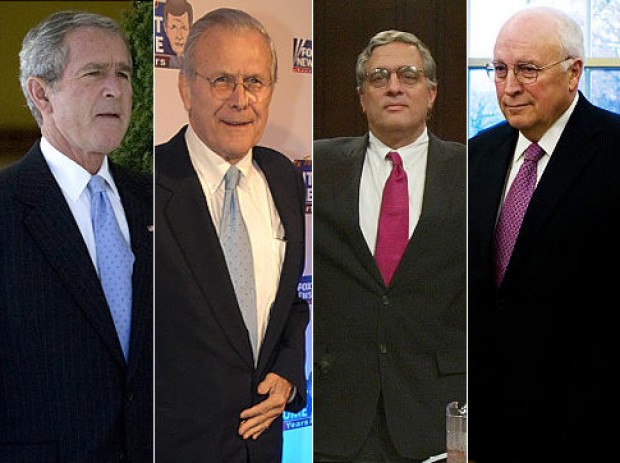 The German Federal Prosecutor must investigate former CIA Director Tenet, former Secretary of Defense Rumsfeld and others – and should not wait until they are on German soil

17 December 2014 – The European Center for Constitutional and Human Rights (ECCHR) has  lodged criminal complaints against former CIA head George Tenet, former Defense Secretary Donald Rumsfeld and other members of the administration of former US President George W. Bush. The ECCHR is accusing Tenet, Rumsfeld and a series of other persons of the war crime of torture under paragraph 8 section 1(3) of the German Code of Crimes against International Law (Völkerstrafgesetzbuch).

The constituent elements of the crime of torture were most recently established in the case by the US Senate in its report on CIA interrogation methods. “The architects of the torture system – politicians, officials, secret service agents, lawyers and senior army officials – should be brought before the courts,” says ECCHR General Secretary Wolfgang Kaleck, who is appearing today in connection with the issue in front of the German Parliamentary Committee on legal affairs. “By investigating members of the Bush administration, Germany can help to ensure that those responsible for abduction, abuse and illegal detention do not go unpunished.”

The US Senate report devotes one section explicitly to the case of German citizen Khaled El Masri, who was abducted by CIA agents in 2004 due to a case of mistaken identity and was tortured in a secret detention center in Afghanistan. The criminal complaint details the US Senate report’s finding that once the unlawful error was discovered, the former CIA director refused to take further steps against those responsible.

ECCHR calls on Federal Prosecutor Harald Range to open investigations into the actions of Tenet, Rumsfeld and other perpetrators and to set up a monitoring process as soon as possible. This would allow the German authorities to act immediately in the event that one of the suspects enters European soil and not have to wait until such point before beginning the complex investigations and legal deliberations.

Together with the US Center for Constitutional Rights (CCR), Kaleck previously submitted criminal complaints against Tenet and Rumsfeld in Germany in 2004 and 2006 and against Bush in Switzerland in 2011. ECCHR is also involved in legal proceedings in Spain and France concerning Guantánamo. The current criminal complaint by ECCHR is supported by former UN Special Rapporteur on Torture Manfred Nowak, the CCR in New York along with its President Emeritus Michael Ratner and its Vice President Peter Weiss, winner of the Martin Ennals Awards 2014 Alejandra Ancheita, Professor for International and Public Law at the Université Libre de Bruxelles Annemie Schaus, Professor for Criminal Law at the University of Hamburg Florian Jeßberger and Berlin attorney Dieter Hummel.

The US has to date failed to bring to justice those responsible for the torture and abuse of detainees by US army forces and secret services since 11 September 2001. Only a small number of low ranking members of the military have faced trial at special military court proceedings for instances of torture, including for the abuse at Abu Ghraib. ECCHR and the New York Center for Constitutional Rights (CCR), together with cooperating attorneys in Germany, France, Belgium, Spain and Switzerland have therefore taken legal action against former members of the Bush Administration who directly or indirectly ordered or – in the case of the Administration’s top level lawyers – attempted to legitimize these crimes. ECCHR has also been involved in submitting a number of complaints on the matter to UN Special Rapporteurs.

While criminal complaints against those most responsible for the crimes have been discontinued by the authorities, investigatory proceedings are ongoing in Spain and France in the case of individuals who were detained in Guantánamo. ECCHR is representing German resident Murat Kurnaz in the Spanish proceedings. There is no indication that legal action will be taken by US authorities in relation to torture in Guantánamo and in Iraq. For this reason, recourse will be had to all available legal mechanisms in Europe in order to establish legal liability and to lend support to calls within the US for independent investigations into those responsible at the highest level.

More information on the individual cases can be found here: