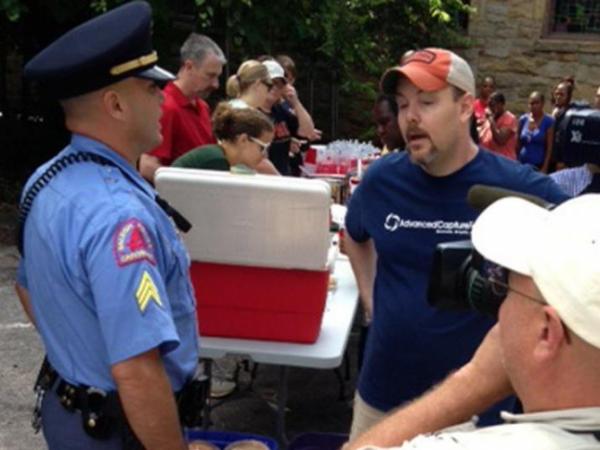 Above photo: Police officer informs volunteer that they must stop serving food to homeless people in Raleigh, NC.

Recently, one family in Atlanta, Georgia decided that they were going to turn their unlucky situation into a beautiful one: to be a blessing to the lives of others by doing something good for those less fortunate in their community.

Carol and Willie Fowler’s daughter Tamara had planned to get married at the Villa Christina catering hall, but the wedding was unexpectedly called off just 40 days before the event was slated to take place. At the initial news, the family was understandably upset that the planned celebration was not going to happen. But, then they had an idea, they didn’t want to let all of their planning and money to have to go to waste.

So they decided to invite 200 of the cities homeless to feast on the four-course meal which had been planned for Tamara’s wedding reception. In order to organize the event, the family contacted Elizabeth Omilami, from the Hosea Feed the Hungry organization. The gesture was so generous, that at first Omilami thought that it was a prank. Children make up a large portion of Atlanta’s homeless, so in order to make the event more entertaining for the children, a clown was hired for the evening. The event has been titled ”The First Annual Fowler Family Celebration of Love,” and the family asserts that they will be hosting another charity dinner next year, planning to make the act a yearly ritual.

“She [My daughter Tamara] was also very delighted to see and know that others had an opportunity to enjoy something, rather than just allow it to go to waste” – Carol Fowler

Following the increase in surrounding popularity of her generous act, the would-be-bride had this to say:

“We never wanted anything more than to turn lemons into lemonade. The whole idea helped me get through a very difficult time. And now the world sees it. I never would have imagined, just doing something good for another person would be such a story to tell. I didn’t even tell everyone in my life, because I didn’t think it was important enough. Thank you for all the positivity…be blessed!” – Tamara Fowler.

More than 630,000 Americans are currently homeless, based on recent data for 2012 that was calculated from the number of people that were sleeping rough or in shelters on a given night. So it is likely that far more people experience homelessness at some point throughout the year, and that number is expected to rise. One out of every 45 children, roughly 1.6 million total, in the U.S. is homeless, according to a report from the National Center on Family Homelessness. Since 2007, the homeless child population in 15 states has increased by more than 50 percent. The states with the highest percentages of homeless children are generally located in the South and Southwest, likely due to the warmer weather.

Banks have foreclosed around 8 million homes since 2007, and it is estimated that another 8-10 million homes will be foreclosed before the financial crisis is over. A study done by the National Law Center on Homelessness and Poverty in 2007 states that 3.5 million people experience homeslessness in the United States in a given year, and that 1.35 million of them are children. These estimates translate to around 1% of the population experiencing homelessness each year. While there may be 3.5 million homeless people each year, there are still 18.5 million vacant homes in the United States.

With Wall Street receiving $1.2 trillion in Federal Reserve secret loans and an estimated total Wall Street bailout estimated to be almost $30 trillion, according to the Levy Economics Institute, this is a disgrace. Thousands of homeless die every year and Wall Street receives much more than enough money to make each and every homeless person in the United States a millionaire, or  almost $100,000 per person, if including the entire population of the country.

There are numerous charities, and millions of people, who willingly and unconditionally give and help others, but even still it just doesn’t seem to be enough. As inflation increases, it is getting harder for American’s to get by, and making it more difficult for citizens to purchase necessary items that will sustain their current standard of living. Luckily, the answer to decreasing prosperity may lie in self-sufficient homesteading, which any of us can get involved in.

More and more individuals are now trying to grow their own food at home, on their window sills and in their backyard. Many find themselves with so much produce, that they are able to give it away to friends, family, and others in need. Some communities have even begun growing gardens, in order to offer fresh produce to the homeless and over impoverished individuals.

We cannot rely solely on the state to address this problem, as in some cases they even seem to be making it worse. Feeding homeless people is even outlawed in several American cities. A group in Raleigh, North Carolina were threatened with arrest if they distributed any sausage biscuits and coffee to homeless people living in the heart of the city. In Orlando, Florida, a group of activists lost a court battle against the city to overturn its 2006 laws which restricted sharing food with groups of more than 25 people. And more than 50 large other cities have passed similar laws such as: Atlanta, Phoenix, Los Angeles, Miami, Oklahoma City, and more.

Columbia, South Carolina, also voted to ban homeless individuals from its downtown business area. It is estimated that there are over 1,500 homeless citizens in Columbia. Police have been assigned to make sure no homeless people are loitering, and business owners and residents are encouraged to call a specified hotline to relay any information related to whereabouts or actions of homeless individuals.

People directly (and voluntarily) helping other people is the only true charity to exist, and it can even inspire others to do the same. And it is scary to see so many forget the humanity of the homeless. Our society teaches people that those with less are worth less, but this misses some of the most important parts of being human. It is sad to see so many determined to make the lives of those with nothing even harder, and I remain thankful that there still exist those of us with enough love to keep giving to the downtrodden anyways.