Critical Lessons From Dr. Martin Luther King For These Times

NOTE: Margaret Flowers and Askia Muhammad will co-host an inaugural special on Pacifica Radio on Wednesday, January 20 from 6:30 to 8:00 pm Eastern. It can be heard on WBAI and WPFW. The theme will be Dr. King’s triple evils and what Biden’s cabinet picks tell us about what we can expect from this administration. Guests include Dr. Greg Carr, Abby Martin and Danny Sjursen.

Also, on Tuesday, January 26 at 8:00 pm Eastern, Popular Resistance will co-host a webinar, “COVID-19: How Weaponizing Disease and Vaccine Wars are Failing Us.” The webinar will be co-hosted by Margaret Flowers and Sara Flounders and it will feature Vijay Prashad, Max Blumethal, Margaret Kimberley and Lee Siu Hin. All are editors or contributors of the new book “Capitalism on a Ventilator.” Register at bit.ly/WeaponizingCOVID.

This week, we celebrate the life of Rev. Dr. Martin Luther King, Jr. and witness the inauguration of our next president, Joe Biden. This inauguration will be unique, first, for being held during a pandemic and, second, for its heightened security in fear of another attack by Trump supporters. Downtown Washington, DC is normally secured during an inauguration and people must pass through checkpoints to get into the Mall and parade route, but this time is different.

There are 25,000 members of the National Guard on duty in the city to protect the President and Members of Congress. But even this does not guarantee security. The FBI is screening every national guard member for ties to right wing militias and groups responsible for the January 6 assault on the Capitol. The ruling class experienced what it is like when those who are supposed to protect you don’t.

This insecurity is another facet of a society in break down. As Dr. King warned us over 50 years ago:

“I am convinced that if we are to get on the right side of the world revolution, we as a nation must undergo a radical revolution of values. We must rapidly begin to shift from a ‘thing-oriented’ society to a ‘person-centered’ society. When machines and computers, profit motives and property rights are considered more important than people, the giant triplets of racism, materialism, and militarism are incapable of being conquered. . . . A nation that continues year after year to spend more money on military defense than on programs of social uplift is approaching spiritual death.” 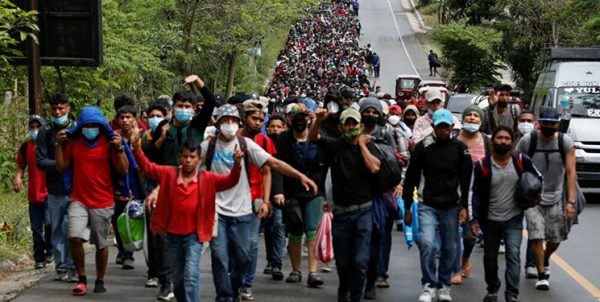 Migrants march from Honduras to the United States with the hope of a better reception under a Biden administration. Luis Echeverria.

The pandemic and recession have exposed more widely what many communities have known for a long time, that corporate profits are more important than their lives and that lawmakers serve the wealthy class. During the pandemic, the rich have gotten richer, the Pentagon budget has ballooned with bi-partisan support and the people have not received what they need to survive. Unemployment, loss of health insurance, hunger and poverty are growing while the stock market ended the year with record highs.

Many are hopeful that a Democratic majority in Congress and a Democratic President will turn this around, and it is reasonable to expect there will be some positive changes. The Biden administration claims it will take immediate action to raise the federal minimum wage to $15/hour, extend the break on student loan payments, provide a one-time $1,400 payment and invest more in testing and vaccine administration, among other actions.

These actions are welcome, but they are a far cry from what is necessary. A family with two parents working full time for minimum wage will still live in poverty, even at $15/hour. The majority of people in the United States, 65%, support giving $2,000/month to every adult during the pandemic. This is supported by 54% of Republicans polled and 78% of Democrats. People with student loans are calling for them to be cancelled, not delayed. And, as I wrote in Truthout, Biden’s priority for managing the pandemic is on reopening businesses and schools, not on taking the public health measures that are called for such as shutting down with guarantees of housing and economic support and nationalizing the healthcare system, as other countries have done.

What is required is massive public investment in systemic changes that get to the roots of the crises we face. In addition to the triple evils that Dr. King spoke about, racism, capitalism and militarism, we can add the climate crisis. An eco-socialist Green New Deal such as that promoted by Howie Hawkins would get at the roots of each of these crises.

Josh Bivens of the Economic Policy Institute argues that the economy can handle a massive investment of public dollars without fear of negative consequences, such as inflation, because for too long the economy has been starving the public while funneling wealth to the top. It is time for redistribution of that wealth to serve the public good.

In fact, Sam Pizzigati of Inequality.org writes that throughout history, governments have fallen when they fail to address wealth inequality and meet the people’s needs. This is the finding of a recent study called “Moral Collapse and State Failure: A View From the Past.” They write that the fall of pre-modern governments “can be traced to a principal leadership that inexplicably abandoned core principles of state-building that were foundational to these polities, while also ignoring their expected roles as effective leaders and moral exemplars.” 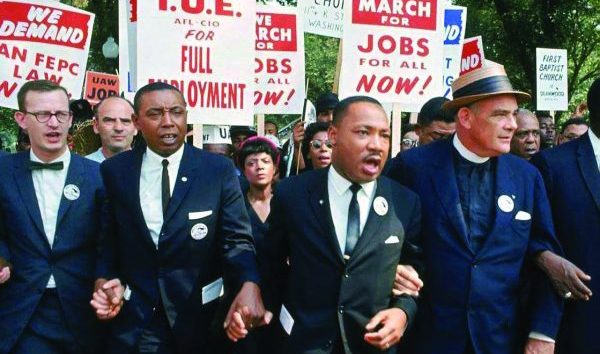 So far, it looks like what we can expect from the Biden Administration is a few tweaks to the system to placate people and relieve some suffering but not the system changes we require. Biden is actively opposed to national improved Medicare for All and a Green New Deal, two proposals that a majority of people, especially Democrats, support. Mark Dunlea explains why the Biden climate plan is inadequate for the dire situation we face.

Biden’s cabinet picks and language make it clear that the United States’ aggressive foreign policy of regime change and wars for resources and domination will continue. Samantha Power, a war hawk, has been chosen to head the USAID, an institution that invests in creating chaos and regime change efforts in other countries. Victoria Nuland, who was a major leader of the US’ successful coup in Ukraine that brought neo-Nazis to power, has been picked for Deputy Secretary of State for Political Affairs. Biden’s choices for CIA Director, Mike Morell, and Director of National Intelligence, Avril Haines, are both torture proponents. Abby Martin of Empire Files exposes the dark backgrounds of several other nominees for Biden’s cabinet, including Antony Blinken as Secretary of State, Jake Sullivan as National Security Adviser, Linda Thomas-Greenfield for United Nations Ambassador and Michael Flourney to head the Pentagon.

It also doesn’t appear that Democrats in Congress will show the necessary courage to fight for what the people need. Danny Haiphong of Black Agenda Report writes about the “Obama-fication” of “The Squad” and how they serve to protect the status quo and weaken the progressive movement. It is important to understand how they are the “more effective evil,” or as Gabriel Rockhill explains, they are the arm of liberal democracies that convince people to consent to the neo-liberal capitalism that is destroying our lives and the planet. This is how Western fascism rises within legislative bodies. Already, we are seeing champions of national improved Medicare for All, Bernie Sanders and Pramila Jayapal, back down to a position of lowering the age of Medicare eligibility, which would not solve our healthcare crisis, only delay that solution.

Chris Hedges often warns us that we need to know what we are up against if we are to effectively challenge it. Dr. King warned us that our nation was heading toward spiritual death if we did not get to the roots of the crises, the triple evils. He demonstrated that social movements should not align themselves with capitalist political parties because then the movement becomes subservient to their interests and compromises its own interests. And he told us what we must do. Prior to King’s death, he was organizing an occupation of Washington, DC to demand an end to poverty.

During the Biden administration, many of the progressive forces will work to weaken those of us who make demands for bold changes. They will try to placate us with a diverse cabinet of women and people of color who were chosen because they support capitalism, imperialism and systemic racism despite their identities. Chris Hedges describes this as a form of “colonialism.”

Our tasks are to maintain political independence from the capitalist parties, struggle for systemic changes and embrace a bold agenda that inspires people to take action. Through strategic and intentional action, we can achieve the changes we need. We have a key ingredient for success – widespread support for the changes we need. Now, we only need to mobilize in ways that inspire people and that have an impact – strikes, boycotts, occupations and more that are focused on improving the lives of everyone.

We can turn things around and reduce the suffering that is driving the polarization and trend towards violence in our country. It’s time to embrace our radical Dr. King.