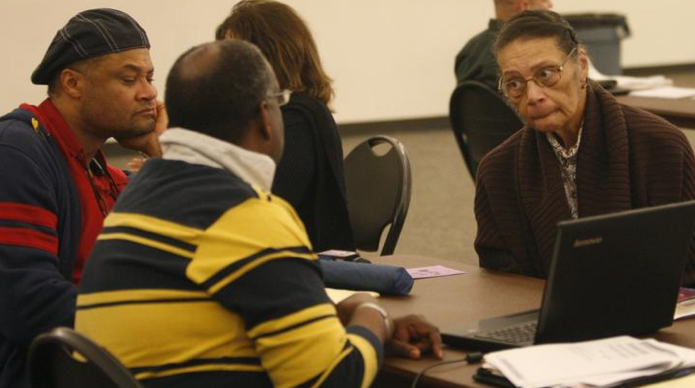 The move was buried in hundreds of pages of new regulations issued late last week. It comes as part of an intensive administration effort to hold down premium increases for next year, a top priority for the White House as the rates will be announced ahead of this fall’s congressional elections.

Administration officials for months have denied charges by opponents that they plan a “bailout” for insurance companies providing coverage under the healthcare law.

They continue to argue that most insurers shouldn’t need to substantially increase premiums because safeguards in the healthcare law will protect them over the next several years.

But the change in regulations essentially provides insurers with another backup: If they keep rate increases modest over the next couple of years but lose money, the administration will tap federal funds as needed to cover shortfalls.

Although little noticed so far, the plan was already beginning to fuel a new round of attacks Tuesday from the healthcare law’s critics.

“If conservatives want to stop the illegal Obamacare insurance bailout before it starts they must start planning now,” wrote Conn Carroll, an editor of the right-leaning news site Townhall.com.

On Capitol Hill, Republicans on the Senate Budget Committee began circulating a memo on the issue and urging colleagues to fight what they are calling “another end-run around Congress.”

Obama administration officials said the new regulations would not put taxpayers at risk. “We are confident this three-year program will not create a shortfall,” Health and Human Services spokeswoman Erin Shields Britt said in a statement. “However, we want to be clear that in the highly unlikely event of a shortfall, HHS will use appropriations as available to fill it.”

The stakes are high for President Obama and the healthcare law.

Although more than 8 million people signed up for health coverage under the law, exceeding expectations, insurance companies in several states have been eyeing significant rate increases for next year amid concerns that their new customers are older and sicker than anticipated.

Insurers around the country have started to file proposed 2015 premiums, just as the midterm campaigns are heating up. Obamacare, as the law is often called, remains a top campaign issue, and big premium increases in states with tightly contested races could prove politically disastrous for Democrats.

If rates go up dramatically, consumers may also turn away from insurance marketplaces in some states, leading to their collapse.

Proposed increases in a few states where insurers have already filed 2015 rates have been relatively low, with several major carriers seeking just single-digit hikes. But insurers in closely watched states, such as Florida, Pennsylvania, North Carolina and Arkansas, are still preparing their filings.

“It’s absolutely paramount to keep premiums in check,” said Len Nichols, a health economist at George Mason University who has advised officials working on the law.

The state-based marketplaces, which opened last year, allow consumers who do not get health coverage at work to shop among plans that meet basic standards. Sick consumers cannot be turned away, and low- and moderate-income Americans qualify for government subsidies to offset their premiums.

To stabilize this new system, the law set up a complex system of funds, including one known as the Temporary Risk Corridors Program, that collect money from insurers and transfer it from companies with healthier, less expensive consumers to those with sicker, more costly consumers.

This system was supposed to pay for itself, as does a similar one used to shift money between drug plans in the Medicare Part D program.

But insurance industry officials have grown increasingly anxious about the new system’s adequacy.

Pressure is most acute on insurers in states where healthy consumers were allowed to remain in old plans that are not sold on the new online marketplaces, an option Obama offered to states amid a political firestorm over plan cancellations last year. The president had promised people would be able to stick with their plans.

The renewal temporarily solved a political problem for the White House, but created a new one. Maintaining these old plans kept many healthy consumers out of the marketplaces, making the pool of new customers less healthy and therefore potentially more expensive for insurers, according to experts.

Premium hikes will likely be modest in much of the country. But probably not everywhere. – Larry Levitt, an insurance expert at the nonprofit Kaiser Family Foundation

In a series of White House meetings over the last several months, Obama and other senior administration officials have sought to persuade insurance company CEOs to nonetheless hold rates in check, arguing that the marketplaces would stabilize over time.

But with proposed 2015 rates beginning to come in, the administration acceded to industry demands for a clear guarantee that more money would be available to cover potential losses.

“In the unlikely event of a shortfall for the 2015 program year, HHS recognizes that the Affordable Care Act requires the secretary to make full payments to issuers,” the regulation published Friday notes. “In that event, HHS will use other sources of funding for the risk corridor payments, subject to the availability of appropriations.”

That language allows the administration to tap funds appropriated for other health programs to supplement payments to insurers, according to administration and industry officials.

Among congressional Republicans, the decision has raised concerns. “If the program costs more than it brings in, the secretary would be able to divert money intended for other programs,” Republicans on the Senate Budget Committee warned.

Whether the new regulations will be sufficient to control rates remains unclear.

America’s Health Insurance Plans, the industry’s Washington-based lobbying arm, welcomed the administration’s move, saying in a statement that the regulations “provide important clarity about how these insurer-financed programs will work as health plans prepare their rates for 2015.”

In a note to investors this week, J.P. Morgan also noted that the new rules “should improve stability of the exchange market.”

But some insurers continue to warn of bigger increases. Larry Levitt, an insurance expert at the nonprofit Kaiser Family Foundation, cautioned that some consumers may still be in for sticker shock.

“Premium hikes will likely be modest in much of the country,” he said. “But probably not everywhere.”