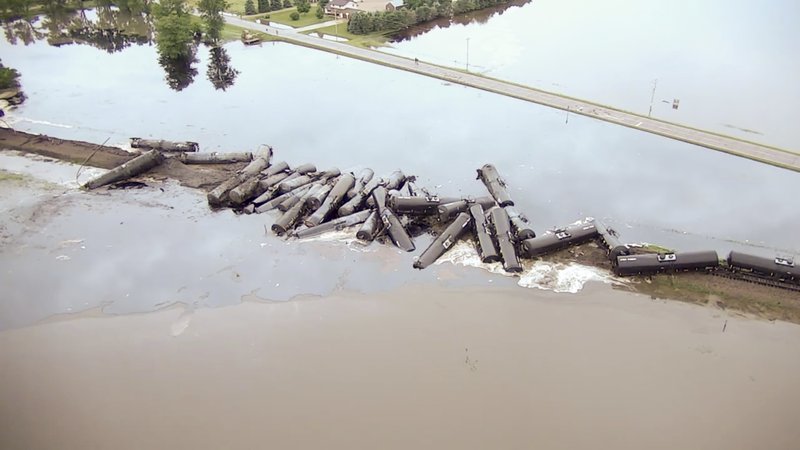 Crude Oil Leaks Into Floodwaters After Train Derails In Iowa

Above Photo: In this aerial drone image taken from video and provided by the Sioux County Sheriff’s Office, tanker cars carrying crude oil are shown derailed about a mile south of Doon, Iowa, Friday, June 22, 2018. About 31 cars derailed after the tracks reportedly collapsed due to saturation from flood waters from adjacent Little Rock River. (Sioux County Sheriff’s Office via AP)

BNSF railroad spokesman Andy Williams said no one was injured when 33 oil tanker cars from Alberta, Canada, derailed around 4:30 a.m. Friday just south of Doon in Lyon County. Some of the tankers were compromised, causing the oil to leak into floodwaters and eventually into the rain-swollen Little Rock River, but officials didn’t have an exact number of tankers that leaked oil by late Friday afternoon, Williams said.

BNSF had hazardous materials and environmental experts on the scene and had begun cleanup within hours of the derailment, Williams said.

“We are containing the oil that was spilled as close to the incident as possible using containment booms and recovering it with skimmers and vacuum trucks,” he said.

Williams said he did not immediately know the train’s destination.

More than 30 tanker cars have derailed in northwestern Iowa and at least some are leaking crude oil into a nearby river. The train derailed early Friday near Doon, north of Sioux City. (June 22)

Officials at the scene agreed that floodwater from the swollen Little Rock River played a part in causing the cars to leave the tracks, but said they weren’t yet sure whether the waters compromised the track, physically pushed the cars off it or played a part in some other way. The river rose rapidly Wednesday after 5 to 7 inches (13 to 18 centimeters) of rain fell Wednesday and a further downpour on Thursday.

A broadening sheen of oil spread near several of the tankers, which had piled up across the track and earthen berm, some submerged in the water.

Vander Stoep said that drinking water in Doon and the immediate area didn’t seem to be in danger of contamination.

But news of the spill was enough to prompt officials in Rock Valley, a small city about 5 miles (8.05 kilometers) southwest of the derailment, to shut off all the city’s drinking water wells. The water towers also will be drained as a precaution, said Rock Valley public information officer Travis Olson. In the meantime, the city is getting its water from the nearby Rock Valley Rural Water system, which Olson said is not in danger of being contaminated by the spill.

The city, with a population of nearly 3,400, will stay on the rural water system until testing by the Iowa Department of Natural Resources confirms the safety of the city’s drinking water, Olson said.

“I don’t know how long that will be,” he said. “It sounds like the cleanup is going to take a while.”

Williams said he was unsure how much oil leaked and how many of the cars were leaking. Lyon County Sheriff Stewart Vander Stoep said the oil was being carried downstream into the Rock River a few hundred yards west of the derailment.

No information was immediately available on how much oil each of the tankers was carrying. Cleanup crews were dispatched to the site.

Vander Stoep said four homes near the site were evacuated.

The Rock River had already carried some oil to Rock Valley by midmorning, said Ken Hessenius with the Iowa Natural Resources Department. State crews were trying to determine how fast the oil was travelling south. The Rock River joins the Big Sioux River before merging into the Missouri River at Sioux City.

The task difficulty is compounded by the spreading floodwater, he said.

“The river, instead of being 100 yards wide, is now maybe a half-mile wide” in spots, Hessenius said.

“Our first major concerns are public water supplies,” he said, adding that several towns that draw water from shallow wells near the Rock River have been alerted about possible contamination.

Doon is about 40 miles (65 kilometers) southeast of Sioux Falls, South Dakota, where several rain-swollen rivers overflowed Thursday. The National Weather Service has forecast flooding in the area into the weekend.