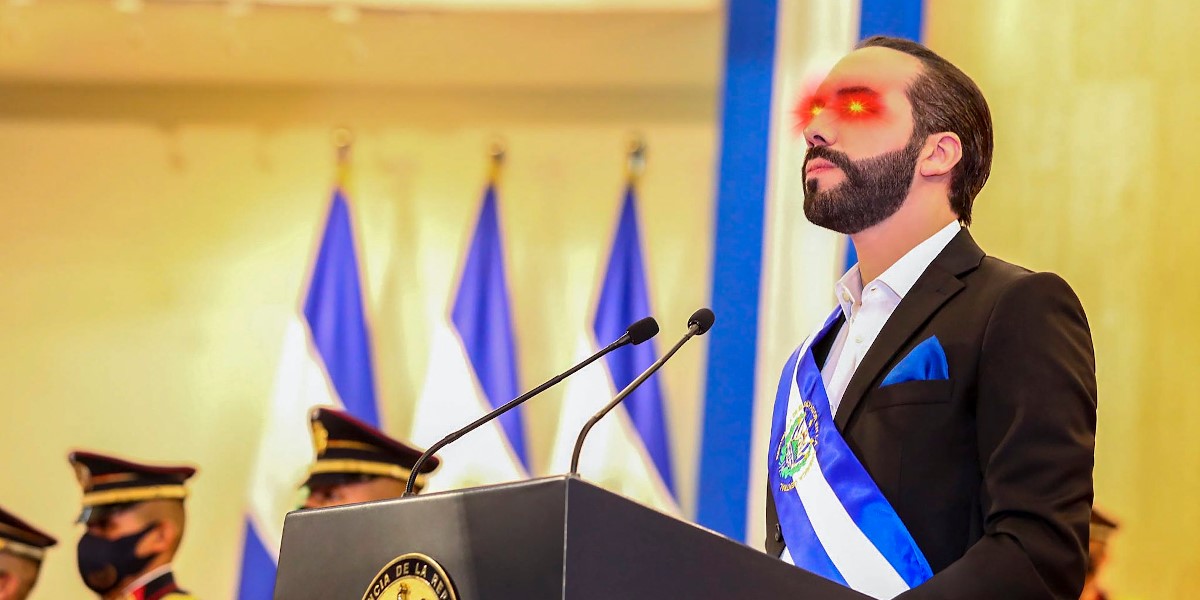 Cryptocurrencies: A View From The Left

Above Photo: President of El Salvador Nayib Bukele, who accompanied his declaration that cryptocurrency would be recognised as legal tender in June by changing his Twitter profile pic to this version of himself with glowing laser eyes. Nayib Bukele.

As Cryptocurrencies Take The World Of Finance By Storm, Thomas Redshaw Examines Their Rise And What The Left Should Make Of Them.

The use of cryptocurrencies is rapidly increasing across the world. In 2020, scholars at the University of Cambridge estimated there were 101 million people using cryptocurrencies worldwide, an increase from 35 million just two years previously. The rise of cryptocurrency is usually a story of pizzas bought with bitcoins now worth over a billion dollars, kingpins of darknet drugs markets ordering assassinations and hospitals being held to ransom by anonymous hackers. These new levels of activity however are pushing cryptocurrency, and its underlying blockchain technology into the mainstream – with significant consequences.

The first and arguably biggest impact so far is cultural. The origins of cryptocurrency lie with utopian libertarians attempting to construct a basis for the ultimate free market. Bitcoin was designed to be a currency that no centralised organisation, let alone nation state, could control. Instead, digital assets could be exchanged across peer-to-peer networks run, in theory, by anyone with a computer.

Emerging at a time when the reckless lending of financial institutions had crashed the world economy and national governments had shifted its costs onto working people via austerity measures, the idea of a currency run by its users that could challenge the power of the banks appealed to many. These ideas flourished online, particularly in the wake of Edward Snowden’s revelations about mass surveillance, and a new subculture emerged, replete with its own specialised news sites, forums, events, businesses and vernacular. While there was some degree of ambivalence to the politics of early bitcoin users, the anti-establishment populism that now characterises this subculture is fervently right-wing.

On the one hand, this is due to the enduring libertarian ideas that inspired bitcoin’s design. Indeed, because many of these ideas are embedded in its functionality – such as a predetermined limit on how many bitcoins can be created – learning how bitcoin works often involves learning libertarian economic theory and its implicit political premise that free markets are the best solution to social problems. On the other hand, using bitcoin involves financial speculation. Bitcoin has yet to prove itself as a stable currency but it has demonstrated that those who closely monitor its wild price fluctuations can make money if they can buy low and sell high. This has fostered a Wolf of Wall Street-style culture of frenzied trading.

The result is a libertarian subculture that loathes banks and national governments but celebrates volatile markets and fetishises bitcoin as an agent of historical change. In what may be the best expression yet of capitalist realism, a new tool for free market speculation has become for many a populist symbol of resistance to the ravages of finance capitalism. This is the ideological power of bitcoin: to rearticulate free market capitalism in a new, invigorating way that resonates in an era defined by seemingly unaccountable financial institutions, mass surveillance and political inertia.

This has not been lost on political movements on the right seeking to build popular support for neoliberal policies. Indeed, it is arguably the principal reason the right-wing populist president of El Salvador, Nayib Bukele, made the country the first in the world to accept bitcoin as legal tender. Here bitcoin may not function as a stable currency but as a publicity stunt. Bukele has been able to successfully energise his strategy for establishing right-wing hegemony by attracting the interest of a global and growing subculture.

A second major impact of cryptocurrency concerns the way it has been incorporated into global flows of capital. This has occurred in many ways, from cryptocurrencies becoming so prevalent in the trade for illicit goods that ‘crypto-markets’ are now a key focus for criminologists, to blockchain innovation attracting major investment from an array of transnational corporations such as Amazon, IBM and Mastercard.

The indispensable context to all this is the continuing crisis of overproduction. After decades of neoliberalism in which the global economy has been restructured to facilitate more free trade and diminish the power of organised labour, surplus value has been increasingly concentrated within the capitalist class. To put it bluntly, rich elites have more money than their financiers know what to do with.

Historically, such moments lead to increases in speculative activity as a bloated finance sector seeks ever more ways to make money out of money, such as trading in futures and derivatives or speculating on the future price of gold or artwork. With no real underlying value being produced by such activities, financial bubbles grow dangerously large and threaten to crash the whole system. Similar concerns are growing about the potential consequences of a cryptocurrency crash.

At the heart of this issue is Tether. Tether is essentially a bank for people looking to make quick money by trading cryptocurrencies (because most banks don’t deal with crypto companies). You buy tokens called ‘tethers’, each one of which the company insists are backed by US dollars. With these casino chips you can then go off to cryptocurrency exchanges and start speculating, safe in the knowledge that you can always go back to Tether and cash in your chips for real money.

However, questions are increasingly being raised over the authenticity of Tether’s claims. This is a serious concern as there are now 69 billion tethers in circulation. If confidence falls, as a result of criminal investigations for example, a significant number of people may try to cash in their tethers at the same time. Tether could collapse and trigger a crash in wider credit markets. The potential impact of such a crash grows as cryptocurrency becomes more enmeshed in global finance and everyday life.

The final and perhaps most widely known impact of cryptocurrencies concerns their ruinous levels of energy consumption. The amount of energy used to power the bitcoin network alone is more than many countries use in a year.

Hundreds of thousands of hardware operators known as ‘miners’ compete with one other to process data on the bitcoin network, incentivised to do so by rewards in units of bitcoin. To successfully process data and receive these bitcoins a miner must set their computer to constantly generate random sequences until one of them effectively wins a lottery operated by the network itself. The more powerful your computer, the more likely it is to generate the winning ticket. This has led to an arms race between miners, the mass production of specialised hardware and the emergence of giant ‘mining farms’ – warehouses full of powerful computers all generating random codes with the aim of processing data for the bitcoin network.

Historically the vast majority of bitcoin mining has taken place in China due to cheap access to electricity. Recently, though, the rapid growth of an industry that is both notoriously difficult to regulate and exhibiting all the signs of a dangerous speculative bubble has led the Chinese authorities to clamp down on both mining and trading activities, enforcing a complete ban on cryptocurrency from June this year.

What Can The Left Do?

The impact of this ban on cryptocurrency is still unclear. While many mining operations have shut down or migrated to other regions, some analysts argue the network’s carbon emissions may actually increase. This brings us to the question: what to do about crypto?

Debates on the left broadly fall into two camps: calling on more governments to follow China and ban cryptocurrency; or calling on social movements to engage with the technology and steer its development towards more progressive ends. The first of these responses has received more mainstream media coverage and influenced public figures from Elon Musk to Elizabeth Warren to denounce bitcoin’s energy consumption. The second has revitalised visions for a global commons within some ‘hacktivist’ circles, with blockchain seen as a much needed alternative infrastructure to the monopoly platforms that dominate the internet.

These two camps are both fighting an uphill struggle in a scene dominated by finance capital and libertarian ideology. They are also at odds with one another, with those advocating regulation perceiving no salvageable potential and those advocating adaptation often attracted to blockchain precisely because of its capacity to escape regulation. As financial blockades on organisations such as Wikileaks demonstrate – not to mention those on countries with socialist governments – it is not only right-wing movements that have reason to evade legal and financial restrictions.

One way to reconcile these two positions may be to decentre the technology and focus on practice. It is indisputable that crypto has given rise to problematic practices (for example, ‘mining’) and exacerbated others (for example, unregulated speculation) and these must be opposed. Yet it is also true that the technology has prompted many to experiment with alternative currencies and projects for building a global digital ‘commons’. The technology is only a tool here; the main objectives and real potential lie with the capacity to build networks of solidarity and collaboration aimed at addressing real injustices. Networks such as Crypto Commons, P2P Models, DisCO Coop, Breadchain, Circles UBI, Holochain and Nym (to name but a few) deserve engagement and support from the left in their attempts to address pertinent grievances around inequality, surveillance and concentrations of power in the digital age.