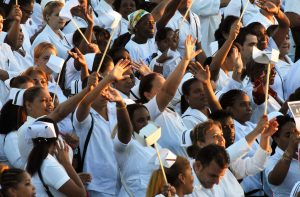 Cuba And The Concept Of Community Of Nations

Cuba has shown its solidarity with other countries during the coronavirus.

Dominic Raab, the UK Secretary of State for Foreign and Commonwealth Affairs, thanked the Cuban Government in parliament for their assistance with the stricken British cruise ship the MS Braemar which had passengers with possible coronavirus infections. He said: “I spoke to the Cuban Foreign Minister twice over the weekend and we are very grateful to the Cuban government for swiftly enabling this operation and for their close cooperation to make sure it could be successful.”

The Cuban Ministry of Foreign Affairs explained its decision: “These are times of solidarity, of understanding health as a human right, of reinforcing international cooperation to face our common challenges, values that are inherent in the humanistic practice of the Revolution and of our people.”

Cuba is also aiding the world on the pharmaceutical front as it has developed its own large biopharmaceutical industry which is producing medicines that could save thousands of lives in the COVID-19 pandemic, including the antiviral drug Interferon Alpha 2B. The medicine has been produced in China in a Cuban-Chinese joint venture, and has been used to treat more than 1,500 Chinese patients. Interferon is one of 30 drugs chosen by the Chinese National Health Commission to combat the respiratory disease and is now being used by many other countries including South Korea, Panama, Italy, and Germany.

Cuba has sent doctors and health professionals throughout the world for many years and is doing so again during the coronavirus crisis. They just sent a brigade of medical professionals to Italy after requests from the Italian government. TDuring the Ebola epidemic, Cuba worked with the World Health Organisation in Western Africa. When there have been earthquakes and environmental disasters Cuba has sent medical personnel and rescue teams to assist. They did the same during the Chernobyl catastrophe. Cuba has made solidarity a national characteristic, not only in Cuba, but globally.

Cuba has prioritized healthcare at home and abroad. Cuba has more than 100,000 doctors, the highest number in the history of the country with a proportion of nine doctors per 1,000 citizens. Everyone in Cuba has access to healthcare. In comparison, the United States has 2.6 doctors per 1000 citizensThere are 27 million people without health insurance and tens of millions of more without adequate health insurance.

The entire world is telling the US to lift the 61 year-long blockade against Cuba but the US through successive administrations refuses. Cuba is showing how countries should act with global solidarity at all times, but especially in times of crisis. Cuba is leading by example. Let’s hope the US learns from their example on both positive international solidarity as well as on prioritizing healthcare for everyone in the United States. The US should learn from Cuba, not falsely demonize them.
KZ

Some years ago I was talking to a Cuban doctor about what a remarkable achievement it was that Cuba was able to eliminate Malaria in 1973. He took the discussion in stride and said that it didn’t mean much until we eradicate Malaria in the entire world.

Today Cuba is proving once again that their view of health and battling diseases is one that is global in scope and despite living under the unilateral 60-year-old US blockade, with additional sanctions coming their way daily, they always rise to the occasion and go beyond their own capacity to assist when a disaster or a global pandemic hits like the COVID-19 gripping the world now.

Yesterday the Cuban government authorized a British cruise ship carrying five people with confirmed cases of COVID-19 and another 40 in isolation with flu-like symptoms, to dock at a port on the island. Since the end of February the MS Braemar, with 682 passengers and 381 crew members aboard, has been floating around the Caribbean after being turned away by a number of countries including Barbados, the Bahamas, and the Dominican Republic. Cuba is now collaborating with the British government to attend to those who are infected while arranging evacuation flights from Cuba to the UK for all the passengers as soon as possible.

A major contribution that Cuba is making in the struggle against COVID-19 is with its anti-viral medicine Interferon Alpha 2B, developed in 1986 and recognized as one of the most effective medicines in treating the virus. It is credited with saving 1,500 people from the virus in China alone. Alpha 2B is being produced in large quantities in China in a cooperative joint venture not based on profit but for making supplies available to all countries. Cuban medical personnel is now being contracted to Italy, Venezuela, Jamaica and other nations along with supplies of the Interferon. Meanwhile, Cuba’s producer of medicines Bio-CubaFarma is producing 21 other compatible medicines for the treatment of complications that may arise in patients with COVID-19.

On the other end of the spectrum from Cuba’s collaborative global approach to fighting disease and illness is the entitled, selfish and single nation approach of the US. As more cases add up in the US not only is there no national plan there isn’t even a serious attempt to test to find out who is ill and who isn’t. States and communities are left to figure it out by themselves, hundreds of thousands of homeless, people locked up in prisons and uninsured are completely vulnerable and exposed to the disease while the focus and direction is geared towards protecting the economy and in particular the stock market. The Trump Administration had two and a half months to get it together since the outbreak of the virus manifested itself in Wuhan China, instead, they went into racist finger-pointing and denial. In January the World Health Organization had testing kits available that they offered to the government but Trump declined so that the pharmaceutical corporations could produce them for profit and we are still waiting. The initial cost for the testing was around $3000.

The gesture that Cuba made to help the people on the British cruise ship came with no strings or pats on the back needed. It is a small incident in the big picture of what is going on in the world now but it says a lot about Cuba’s concept of the community of nations. In explaining the gesture Cuba’s Ministry of Foreign Affairs issued a statement that said, “These times call for solidarity, understanding health as a human right and strengthening international cooperation in order to address our common challenges; values that are inherent to the humanist practice of the Cuban Revolution and people”.