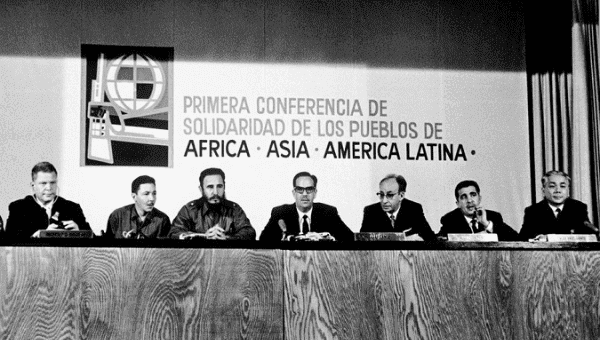 In 1966, 500 Delegates From Asia, Africa, And Latin America Adopted Common Policies To Fight The Imperialism’s Insight In Culture And Smear Campaigns Against Social Revolutions.

On Monday, progressive organizations celebrate the 56th anniversary of the First Tricontinental Conference, which gathered 500 delegates from Africa, Asia, and Latin America in Havana to adopt policies to strengthen the fight against imperialism and neo-colonialism.

“This event was an exercise in diplomatic cooperation between anti-hegemonic forces of different origins that advocated peace and the self-determination of peoples,” German intellectual Jennifer Hosek stressed.

Besides discussing the imperialism’s smear campaigns against social revolutions, delegates founded the Peoples of Asia, Africa, and Latin America Solidarity Organization (OSPAAAL) to support countries that had recently liberated themselves from colonialism.

This multilateral institution, whose secretariat continues to function today in Cuba, has stimulated effective and timely cooperation to promote these continents’ sustainable development and cultural identity defense.

If the most catastrophic defeats of 2021 was the failure of the Global North to adopt globally democratic politics against #COVID19#pandemic, the most beautiful I experienced this year was the great humanity and professionalism of #Cuba to develop a people’s #vaccine.
GRACIAS! pic.twitter.com/VUYDeICEem

It has also reaffirmed an agenda of peace and demilitarization and prompted the defense of non-interference principles in the United Nations and other international organizations, which the United States coerce to defend its hegemony.

The conference also founded the Tricontinental magazine, which spreads the worldview of developing countries and belies imperialism-backed smear campaigns against social revolutions in Africa, Asia, and Latin America.

“All leaders here have managed to temper our differences to achieve a common goal: to unite in the struggle for social justice. Therefore, we will remember this event as historical,” Ernesto “Che” Guevara stressed at the Tricontinental Conference.

December 14, 1994: Chávez speaks of a revolutionary project, a Latin American and Caribbean continent ‘fully integrated as one nation’