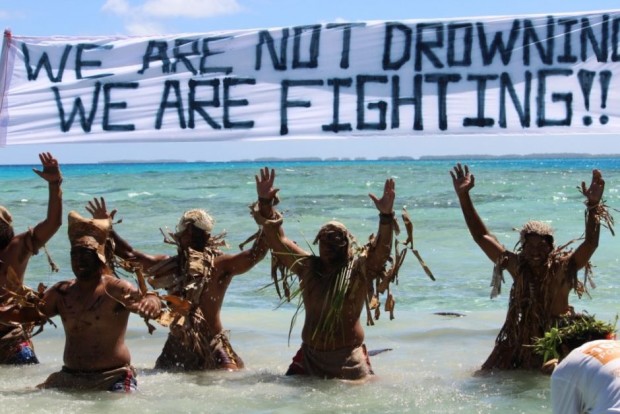 Cultivating Climate Justice From The Frontlines

This is part 2 of a four-part article series “Cultivating Climate Justice” which tells the stories of community groups on the frontlines of the pollution, waste and climate crises, working together for systems change. United across six continents, these grassroots groups are defending community rights to clean air, clean water, zero waste, environmental justice, and good jobs. They are all members of the Global Alliance for Incinerator Alternatives, a network of over 800 organizations from 90+ countries.

Global Alliance for Incinerator Alternatives (GAIA) and Other Worlds

“To anyone who continues to deny the reality that is climate change…. I dare you to go to the islands of the Pacific, the islands of the Caribbean and the islands of the Indian Ocean and see the impacts of rising sea levels; to the mountainous regions of the Himalayas and the Andes to see communities confronting glacial floods, to the Arctic where communities grapple with the fast dwindling polar ice caps, to the large deltas of the Mekong, the Ganges, the Amazon, and the Nile where lives and livelihoods are drowned… And if that is not enough, you may want to pay a visit to the Philippines right now.” – Philippines lead negotiator Yeb Sano addressing the opening session of the UN climate summit in Warsaw, following Super Typhoon Haiyan in 2013.

It’s been a year since

Super Typhoon Yolanda (often called Typhoon Haiyan in other countries) swept through the Philippines, killing more than 6,000 people and destroying the homes of many more. As UN negotiator for the Philippines Yeb Sano explained in his address to the United Nations: for many people, this is what climate change looks like.

Following the typhoon, survivors in impacted communities in the Philippines came together in a deep expression of solidarity to help each other rebuild their homes and lives. Using only reclaimed materials—remains of their homes and other disaster debris—residents of the municipalities of Bantayan and Madridejos worked together to reconstruct their neighborhoods, one house at a time. Salvacion Fulmenar, a resident of Bantayan Island, explained that fifty of her neighbors built her house with her.

The residents also worked together to increase resiliency against future disasters, particularly around the issue of waste management. Shalimar Vitan, Asia-Pacific Coordinator for the Global Alliance for Incinerator Alternatives (GAIA) explained the connection. “Yolanda made us realize how much waste, more than anything else, is relevant to disasters, because the aftermath of a disaster is

garbage and waste, equivalent to a year’s supply. A sustainable treatment of waste builds our preparedness for disasters and it builds the resiliency of communities.” Residents worked with local and international non-profit organizations to conduct waste audits and seminars in the impacted communities.

A sustainable treatment of waste does more than build preparedness for disasters—it also helps to combat climate change. Waste disposal through dumping or

But reducing waste in the Philippines is not enough to stop climate change or to protect vulnerable communities living there. What’s needed is for the issues of waste and climate crises to be solved collaboratively across borders. And in an inspiring Asia Pacific grassroots partnership, that is exactly what’s happening.

One of the greatest injustices of climate change is that those who have done the least to cause it—like the residents of the Philippines hit by Super Typhoon Yolanda—feel the impacts first and worst through rising sea levels and extreme weather. Meanwhile, areas that are responsible for the largest greenhouse gas emissions often feel little pressure to reduce their emissions. They tend to be wealthier with more powerful governments, thus they are less susceptible to international pressure and often have infrastructure that is better able to withstand extreme weather. For example, while Super Typhoon Yolanda was ripping through the Philippines, just across the sea, Prime Minister Abott of Australia continued to deny the existence of climate change.

Yet underneath the political divides of the Asia Pacific region, at the level of the citizenry, strong international bonds have formed. Grassroots communities of the Philippines and Australia have been supporting each other in a common fight against incineration.

In addition to being a major contributor to climate change, incineration releases cancer-causing toxins, kills jobs, and violates the principles of environmental justice. The Philippines stands out as the only country to have banned incineration, setting this important precedent 15 years ago. However, this ban is currently under attack by companies, elected officials, and government agencies. Meanwhile, Western Australia is facing an unprecedented onslaught of incinerator proposals from polluting corporations trying to pass the dirty practice of waste burning as “green.”

People from both countries have been meeting to share information about incinerators, reports, and strategies. Just after Super Typhoon Yolanda struck, Australian toxics expert Lee Bell traveled to the Philippines to visit with communities threatened with incinerators. Lee spoke to members of Congress, the media, and the general public. He also conducted small meetings and workshops to update the local network on trends in the incineration industry, and shared a community handbook on questions to ask your government about an incinerator proposal. Shortly after, residents of the Philippines mobilized support and gathered signatures for an Australian petition against the export of hazardous waste.

These are just a couple examples of what is a rich an ongoing partnership. Jane Bremmer, a resident of Western Australia who works with the Alliance for a Clean Environment and the National Toxics Network explained, “The connection between the Philippines and Australia is really important. Our massive contribution to air pollution and climate change directly affects the Philippines and contributes to natural disasters. Collaborating with them has also strengthened our own work fighting incinerators, teaching us how to work more effectively and communicate across different cultures.”

The governments of the world are not working effectively together on the connections between climate change and waste, issues that affect us all. They may spend years passing the buck, avoiding blame and responsibility for rising sea levels and extreme weather. But as the cross-border collaboration between Australia and the Philippines demonstrates, what governments are failing to do, people are already doing. Across political differences, geographic divides, and cultural differences, global citizens are joining together in a unified fight that is cultivating a new world of climate justice.