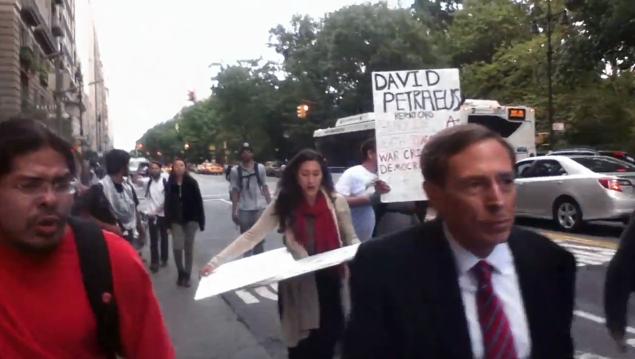 Above: David Petraeus was greeted by protesters on his first day teaching at CUNY.

The general’s presence on campus has sparked protests, arrests and beatings in the streets and is part of a larger transition toward militarism and corporatism.

Want to turn a university into a war zone? Invite General David Petraeus onto campus.

Ever since the general showed up at the City University of New York (CUNY), battles have been raging in hot and cold flashes. As students rattle barricades, the school’s Board of Trustees is maneuvering behind the scenes to quell the revolt; shutting down a popular activist hub and referring dissident collegians to the District Attorney’s office. At the moment the war has reached a stalemate, but as one semester ends and another begins, the university with the most diverse student body in the United States remains on the front lines of the future of public education.

If calling CUNY a war zone sounds outlandish, consider the weaponry the school’s public safety officers have at their disposal. A Freedom of Information Act request from a Hunter College student in the late ’90s uncovered the school was stockpiling tens of thousands of ammunition rounds, including 4,000 hollow-point 9mm bullets. No bullets have been fired so far, though rallies have come to blows.

The trouble started this semester when the school enlisted Petraeus, the disgraced ex-commander of U.S. operations in Iraq and Afghanistan and former CIA chief, to teach a class, “The Coming North American Decades,” at its Macaulay Honors College. Course materials included literature espousing the virtues of hydraulic fracturing, aka fracking, but no mention of the general’s ties to Kohlberg Kravis & Roberts, a private equity firm with millions invested in the controversial oil and gas extraction method. Yet demonstrations against Petraeus’s presence mainly focused on his role as an architect of U.S. wars abroad—part of an ongoing challenge to what critics describe as the increasing militarization of the university.

The protests quickly turned violent, with police beating students in the streets this September. The confrontation could have ended there, with a cluster of roughed-up students known as the CUNY 6 arraigned on charges including resisting arrest and rioting. But it didn’t.

In October, the administration announced it would close the student-run Guillermo Morales-Assata Shakur Center at its City College campus, long a fulcrum of student and community activism, where much of the anti-Petraeus organizing has taken place. Activists say the move to arbitrarily replace the center with a computer lab was an act of retaliation. Large protests against the shuttering on October 24 turned ugly. The school put the campus on lockdown and two students, Tafadar Sourov and Khalil Vasquez, were suspended and criminal charges of rioting ensued. The pair have become de facto freedom fighters in the eyes of many in the student body and posters that read “Missing Students” above photographs of Sourov and Vasquez dot the college’s lampposts.

“Feels like there is actually school spirit around here,” remarked Louis Oprisa, editor-in-chief of the City College’s student newspaper the Campus while we waited to enter one of Sourov and Vasquez’s disciplinary hearings earlier this fall. Oprisa was not being sarcastic; approximately 100 students had turned up to show their support.

“It’s my goal to get suspended before I graduate,” quipped a student wearing a hijab behind me in the line who declined to be identified.

As Vasquez and Sourov entered the hearing, I asked them what they had done to incite a riot. “We gained entry to the building while public safety officers were locking down the building,” said Sourov. “It was during midterm exams week and students couldn’t get in or out.”

“In the first letter we got from the school,” Vasquez added, “they said we tried breaking and entering. In the second letter we got, they said we were interfering with the academic process. But the fact is they disrupted our learning experience by bringing in Petraeus, by closing down the Shakur Center and by restarting the ROTC program.”

Before the general had even arrived the cauldron of dissent was simmering. A semester before he showed up, on the heels of a sex scandal that led to Petraeus’ ouster as director of the CIA, CUNY reinstated its Reserve Officers Training Corps Program, or ROTC. Dormant for more than four decades, the program’s relaunch was a signal to many that the historic gains of the campus anti-war movement in the 1960s were rolling back.

“There’s a real push underway to redefine CUNY,” said Ron McGuire, an attorney who has represented students, including Sourov and Vasquez, at CUNY disciplinary hearings for more than four decades.

The first student McGuire defended was himself. In 1969, as a leader of a student strike that helped oust the original ROTC program from the school and led to open enrollment at City College, McGuire came before the college’s disciplinary board. He was expelled but eventually worked his way through law school, and after a spell as a Wall Street litigator, estimates that 85 percent of his current case load consists of students standing in the same shoes he once stood in.

“I know what suspension, expulsion can mean for a CUNY student,” said McGuire. “They are fragile. These are students who have survived the streets, survived the racist educational system, survived the gang culture, the drug culture and they’ve made it to college. Take a student out of school for a year in the Ivy League, that kid will be back. A student from CUNY might have a family, a kid by that time, might have financial responsibilities. A long-term suspension can be a life sentence for CUNY students.”

The ethnic, racial and gender composition of CUNY’s Board of Trustees approximates that of the student body. However, each member — appointed either through the governor or the mayor — arrived at CUNY through chambers of wealth, power and finance that set them apart from the students whose interests they are obligated to serve. Trustee Frieda Foster arrived at CUNY via Burson-Marsteller, a firm that has handled public relations for the likes of BP and Phillip-Morris. Her colleague Kathleen Pesile is a former JPMorgan Chase vice-president. Jeffery Wiesenfeld, another trustee, worked as a counterintelligence operative for the FBI and is currently a principal at Bernstein Global Wealth Management.

“CUNY is not run by people who represent the interests of our communities,” said Sourov. “It’s run by the Board of Trustees who come from the FBI, who roll with [Mayor] Michael Bloomberg and other such figures who don’t experience the things that we go through and don’t care about us at the end of the day.”

The pair’s attorney has a theory about why the ROTC is back at CUNY. While the draft is officially over in the United States, McGuire argues that at CUNY and other institutions of higher learning that cater to America’s working-class youth of color it is effectively in full swing, as African Americans and immigrants with no other means of supporting themselves are being recruited through ROTC programs to fight America’s wars abroad.

The stakes are high. As one of America’s largest universities, and one known as the “Harvard of the working-class” for its high levels of academic discipline, what happens at CUNY could set a template for schools nationwide.

“These students are going to determine the intellectual landscape of the United States,” says McGuire, “whether that landscape is going to be a militarized society, with a wealthy ruling class sitting on top and black and Latino working-class youth fighting wars all over the world.”

Sourov and Vasquez were forced to cop a deal with the administration, after the school decided to preempt their disciplinary hearings by bringing criminal rioting charges against the students, which prevented the pair from testifying before the disciplinary board. The deal leaves them suspended for the remainder of the fall but returning to classes in the spring to keep up the fight, as Sourov puts it, “for a radically different, democratic CUNY.”

When they return they may indeed find a radically different CUNY waiting for them, but not the school they envision. The Board of Trustees has drafted new guidelines governing political activity that, if adopted, would force students to contact the school’s public safety department before demonstrations and place restrictions on leafleting. Meanwhile, General Petraeus will be leaving New York’s working-class Harvard to take-up a teaching post at the actual Harvard in Cambridge, Massachusetts this spring.

On January 9, the CUNY 6, Sourov and Vasquez will all be appearing at the 100 Centre Street courthouse, where criminal proceedings against them will begin.

Peter Rugh is a frequent contributor to Vice.com and a correspondent for WagingNonviolence.org. Follow him on Twitter @JohnReedsTomb.