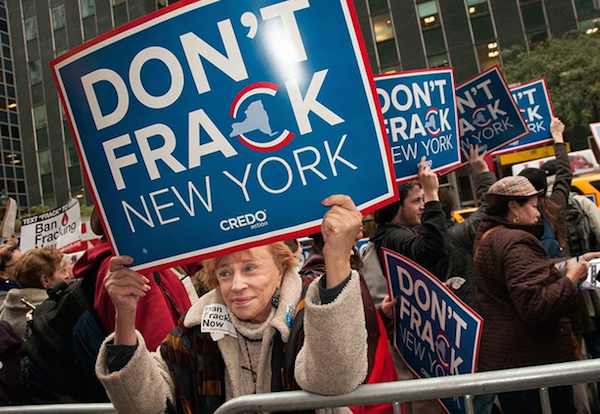 Gov. Andrew Cuomo may have had little choice but to prohibit fracking in New York, say some activists who worked toward the ban. His decision was made convenient by a state court decision against fracking and rapidly falling natural gas prices. These events combined may have already killed the fracking industry’s interest in the state.“You could say it was a moot point,” says an environmental and political activist who wished not to be named since he works with Cuomo’s administration on unrelated matters. “I do wonder if there would have been a different message from Cuomo if the State Court of Appeals had not ruled that towns could ban fracking.”

The activist, who worked with anti-fracking organizations since 2009, said the Cuomo administration hinted it would decide the other way, including fudging the results of a study by the U.S. Geological Survey, commissioned by the state to assess the impact of fracking on well water.

In October, Capital New York reported that officials delayed the report and edited some of conclusions so they wouldn’t be politically inconvenient if Cuomo decided to lift the moratorium and allow the controversial energy extraction practice. Capital New York found disparities between the original draft and the final version that came after extensive communication between the Cuomo administration and USGS. It said that the differences reveal that “some of the authors’ original environmental and health risks associated with fracking were played down or removed.”

Last week, Cuomo met with his top advisers and representatives of the media. There, he deferred his decision on fracking to the findings of Department of Environmental Conservation commissioner Joseph Martens and acting state health commissioner Howard Zucker.

The activist said, “A lot of people are thanking Cuomo, Martens and Zucker, but the wheels were already set in motion. It wasn’t Cuomo who stopped fracking, it was the activists and the communities. It’s because the people stood up, and they organized and then they won a big victory in court.”

Zucker and Martens summarized the findings of their respective reviews and concluded that fracking carried unacceptable risks that have not been sufficiently studied. Zucker went as far as saying he would not let his family live near a fracking site. Martens will release an environmental impact statement on fracking next year, followed by an order to prohibit fracking operations in the state.Soon after the decision, Bill Lipton, director of the state’s Working Families Party, one of the groups behind the New Yorkers Against Fracking Coalition, said, “New York is worth more than the gas under our feet. Six years ago, the gas drillers told us hydrofracking was an inevitability. We believed in a better future for our state. Every New Yorker who spoke up, called their lawmakers, boarded a bus to Albany, signed a petition or put a sign in their yard deserves enormous credit.”

Gasland filmmaker Josh Fox praises the wisdom of activists relying on health and environmental research in the battle. He also said activism inspired more scientific studies.“If it was not for our movement there would not have been any science on the subject,” said Fox in a letter to activists. “In 2008, there was very little science on fracking at all.”

But Albany Project blogger Phillip Anderson says that activists had more than just science on their side; deciding to fight the battle on the local level ended up being their best strategy.

“And then those local anti-fracking organizers began doing something brilliant, something that, in the end, may have been the single most important tactical move in the whole war, though I doubt very few people realized its significance at the time. They began pressuring their local city governments to ban fracking within their city limits using zoning laws or passing new ones if necessary. And they began to win those fights. Cities, towns and villages began using local laws to ban fracking locally.”

Meanwhile, activists were growing in number and they began to hound Gov. Cuomorelentlessly at appearances. It didn’t matter the town or the subject of the speech he was giving, fracking was an issue the governor had to contend with whenever he met with the public. As Anderson, a former State Senate staffer says, “It was obvious that they were annoying the hell out of him and he let slip more than once that he basically hated their guts.”

Cuomo also found that his hesitance on fracking was hurting him with Democratic voters upstate. His upstart primary opponent, Zephyr Teachout, made a fracking ban one of her campaign’s core issues. And while Teachout won only 34% of the vote against Cuomo, she won nearly two dozen counties upstate, where fracking is a hotbutton issue.

In June, New York’s highest court issued a 5-2 decision upholding the legal theory called “municipal home rule” that supported scores of municipal bans on oil and gas production in the state. The case, Norse Energy v. Town of Dryden, centered on zoning restrictions put in place by towns of Dryden and Middlefield to stop fracking within their town boundaries. The two upstate towns were sued by large energy corporations that insisted they had a right to frack within their jurisdictions despite zoning laws that prohibited some of the practices involved in hydrofracking.​

The plaintiffs, notably the multibillion-dollar Anchutz Exploration Corporation, insisted that state regulations on energy extraction superseded any town zoning regulations that would either limit or effectively ban an industry from operating there.​ But the court backed the towns, and the opinion was even written by Judge Victoria A. Graffeo, a conservative who was appointed by George Pataki, New York’s former Republican governor.

“At the heart of these cases,” wrote Graffeo in her opinion, “lies the relationship between the State and its local government subdivisions, and their respective exercise of legislative power. These appeals are not about whether hydrofracking is beneficial or detrimental to the economy, environment or energy needs of New York, and we pass no judgment on its merits.”​

As as result of the landmark ruling, 170 pending municipal restrictions against fracking related practices became law, making only unincorporated areas of the state vulnerable to the practice. Martens, in his presentation on the fracking issue last Wednesday, said the Dryden/Middlefield ruling made fracking impossible in at least 63% of the state, along with the DEC’s bans on fracking in the Syracuse Watershed and near the New York City water system, which are unfiltered water supplies. Martens also said a hodgepodge of municipal laws could confuse and bog down companies hoping to establish wells in the state.

“The uncertainty about whether [fracking] is an authorized use would undoubtedly result in additional litigation,” Martens said. “It would also result in a patchwork of local land use rules, which industry has claimed would utterly frustrate the rational development of the shale resource.”

“In the end, all those local bans played a huge part in making fracking far less attractive financially and the head of the DEC made it a point to mention that fact repeatedly,” said Anderson.

Dryden Supervisor Mary Ann Sumner, who oversaw the banning of fracking in her town, told the Associated Press she’s thrilled to find that her town’s decision was considered by Cuomo’s commissioners in their decision-making process. “This is the best possible outcome of the governor’s decision-making process; this is more than I had hoped for,” Sumner told the AP. “It’s really thrilling to realize that a grassroots effort really can make a difference.”

Immediately after the Dryden decision, it looked like the energy extraction industry had written off New York, throwing up its hands in disgust at the Court ruling, and saying it may not be inclined to do business in the state.

Thomas S. West, a lawyer for Norse Energy in its suit against Dryden said that, “the industry has already fled the state because of the six-year moratorium” and that the industry couldn’t work in a climate where it would invest “tens or hundreds of millions of dollars required to develop the resource, only to be at risk of a municipal ban.”

Fracking may also be less viable and more financially risky than analysts once believed. A recent study by economists and engineers at the Bureau of Economic Geology found that with falling prices, some 70% of natural gas plays in the Barnett and Fayetteville shale reservoirs in Texas and Arkansas were likely to become commercial failures. The interdisciplinary team came to this conclusion a year ago when natural gas was near $4 per MMBtu. Today the price is at $3 MMBtu, a fall as precipitous as the one oil is experiencing. This is in part to unseasonably warm weather in much of the U.S., but also because there is a glut of natural gas on the market, of which fracking plays a big part.

Energy researchers also say the estimated returns on shale gas plays have been wildly optimistic and that many fields are consistently underperforming. Researchers from the University of Texas/Austin said in the December issue of the journal Nature that natural gas production from major shale formations have been overstated in the past.

Fracking technology has brought so much natural gas onto the market that the price can’t support the expense of shale gas drilling, which produces marginal profits even when the price of gas is high. So fracking, which is expensive and energy-intensive, may be its own worst enemy by contributing to lowering prices to the point where it might not be profitable to frack.

While the fracking industry may have given up on New York, Republican lawmakers haven’t. Calling Cuomo’s ban purely political and crying foul. One member of Congress from the state’s energy-rich Southern Tier is even vowing to overturn the state’s ban on a federal level.

Rep. Tom Reed, a Republican member of Congress who represents much of the areas west of the Catskill Mountains and along the northern border of Pennsylvania, says he’s looking into the possibility of having the federal government supersede New York’s fracking ban. Reed told political reporter Fred Dicker that the feds already have the authority to overrule the ban, much in the same way federal telecommunications measures override municipal zoning laws regarding the placement of satellite dishes.

“So the federal government could have a role here,” Reed told Dicker on Albany’s Talk 1300 radio. “Obviously when we talk about energy, we’re talking about our energy security and that has national implications.”