Above photo: Students planting seedlings during a field trip to Great Kids Farm in 2019. Anne Rosenthal.

America wastes up to 40 percent of its food, and schools are no exception. Teaching students where food comes from is part of the solution.

Baltimore, MD – As a “farm to school specialist” in the Baltimore City public schools, Anne Rosenthal splits her time between an office and Great Kids Farm in Catonsville, a 33-acre plot of land, complete with forests, a stream, greenhouses and a barn with animals, owned and operated by the school district.

“A lot of students have never had the opportunity to plant a seed or a small plant, or harvest straight from plants and taste farm-fresh produce,” Rosenthal said.

When kids have that first experience of “picking a cherry tomato off the plant and putting it in their mouths,” she said, “they’re much more apt to be excited to see that cherry tomato on their school lunch tray.”

Beyond the obvious educational benefit from this type of hands-on learning, Rosenthal works to help implement the Baltimore Food Waste and Recovery Strategy, which outlines a plan for K-12 schools to divert 90 percent of their food waste and recyclable waste from the city’s incinerator and landfill by 2040. This ambition mirrors waste diversion benchmarks recently set by the city as a whole.

An oft-cited 2012 study from the Natural Resources Defense Council, a nonprofit environmental advocacy group, found that up to 40 percent of food is wasted in America—an estimated $218 billion per year—with households contributing more waste than farms, manufacturers, grocery stores or restaurants. A 2014 food waste audit by Baltimore’s school district showed that students leave anywhere from 19 percent to 58 percent of various categories of food uneaten.

“The major reason that lands are being deforested right now is for conversion to agriculture,” said Dana Gunders, executive director of ReFED, a nonprofit organization dedicated to ending food loss and waste in America. 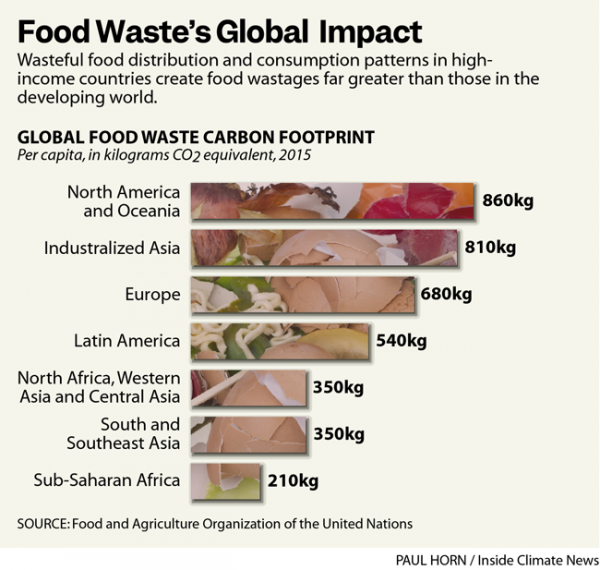 When moldy bananas or spoiled beef is dumped in the trash or down the garbage disposal, much more is lost than simply food. An incredible—but mostly unseen—amount of work and resources goes into adorning grocery store shelves, refrigerators and displays with neatly packaged nourishment from around the globe. This includes: vast amounts of land, water and fertilizer for cultivating crops; animal feed; man-hours spent on farms and in slaughterhouses, and the energy required to run those places; shipping products by land, air and sea; and storage.

“To the extent we can be more efficient with what we already grow, and reduce the pressure to convert native natural ecosystems to agricultural lands, we can have pretty huge savings in terms of climate emissions,” Gunders said.

In addition to the resources used in bringing food from farms to dining room tables, portions left uneaten will go on to exact their own environmental toll.

Once food scraps slip past various means of intervention, they’re likely to find their way into garbage dumps, where in 2018, they made up an estimated 24.1 percent of landfill volume. As food biodegrades it produces methane, a greenhouse gas that is about 80 times more potent than carbon dioxide over a 20-year period. Baltimore’s Quarantine Road Landfill captures escaping methane and converts it into electricity, but the city’s waste and recovery strategy calls it “a highly inefficient process when compared to alternative options like anaerobic digestion,” the process by which bacteria break down organic matter in the absence of oxygen.

According to the Food and Agriculture Organization of the United Nations, food waste accounts for 8 percent of global greenhouse gas emissions.

ReFED estimated that uneaten food in K-12 schools—whether from plate waste or overproduction—contributed to the equivalence of 2.89 million metric tons of CO2 in the atmosphere in 2019.

When Baltimore’s 77,000 students returned to physical classrooms in late August after a year of pandemic interruptions, school cafeterias got back to preparing 90,000 meals a day. Beyond the vagaries of students’ appetites and eating habits, some of the food bought by schools spoils before it’s even served.

Power outages caused by extreme weather and old, malfunctioning cold storage units are commonly to blame. Those outages and breakdowns often happen when no one is around, like evenings, weekends and breaks. This doesn’t always cause food to spoil outright, but it’s still thrown out, just to be safe.

To cut down on such waste, the school district’s department of food and nutrition services bought and installed temperature and humidity sensors for refrigerators and freezers in 12 schools and a warehouse, through an ongoing partnership with the Natural Resources Defense Council.

When temperature or humidity falls outside of a given range, operations staff receive an automatic alert, an innovation common in the hospitality industry. Between December of last year and March 2021, the sensors, 43 in total, helped preserve food at six schools. 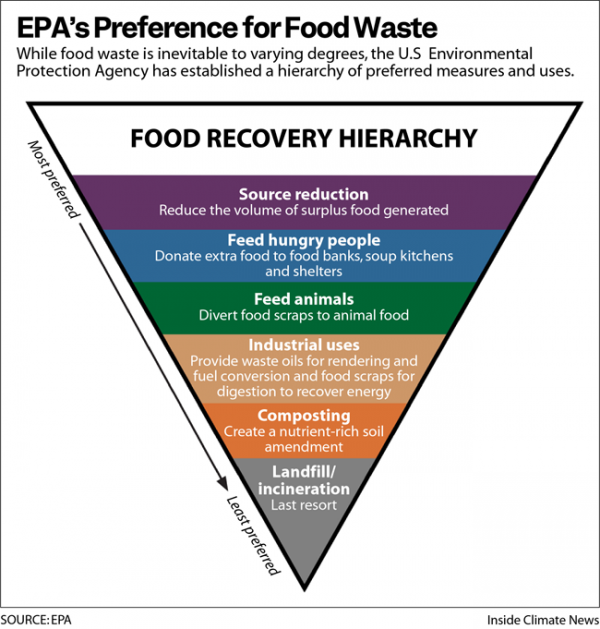 The total cost for one sensor and installation is $1,249, plus $99 for each additional one. The schools involved in this ongoing pilot are outfitted with anywhere from two to eight sensors, and the district plans on installing them in all remaining schools by the end of next year.

In addition to the waste reduction strategy, which also included goals like the elimination of styrofoam cafeteria trays and the establishment of “robust recycling programs” for all schools, the school district’s other primary aim is to “create a supportive culture for food waste reduction and diversion.”

Rosenthal, who was hired almost three years ago, hosts field trips to Great Kids Farm, where students do things like hike and learn how to compost. Farm to school specialists also give students and their instructors the knowledge needed to cultivate their own school gardens.

It’s “a really transformative experience for students and one that could kind of affect their choices both in school cafeterias and at home,” Rosenthal said.

Children are notorious for their picky, sometimes baffling eating habits. The connection Rosenthal and her colleagues try to nurture between students and food can create an appreciation for fruits and vegetables that otherwise might have been passed over or thrown away after a single bite.

“Promoting healthy eating habits can’t just revolve around what’s happening in the cafeteria for, you know, a half-hour to an hour every day,” Rosenthal said, about the importance of outdoor, experiential learning and school curricula that incorporate food.

“We know there are proven benefits [from] farm-to-school education, for physical health and for mental health, not to mention also academic performance,” she said.

As for the food that actually makes its way onto student lunch trays, Gunders, of ReFED, noted that some schools have addressed food waste. One method is to use shared tables, where students deposit food they’re not going to eat for others to snatch up.

“It’s kind of an easy, low-cost, low-effort way to not have all that food go straight to the trash,” Gunders said.

It’s not uncommon for students to throw out unopened cartons of milk if they’re forced to take them, so some cafeterias have opted for milk dispensers that allow the students to take exactly as much as they want, if any at all.

A conservative estimate from ReFED found that switching to dispensers nationwide would save more than $13 million per year. This particular tactic belongs to a strategy called “offer versus serve,” which gives students a range of choices when it comes to their meals.

There are scheduling solutions as well, Gunders said. Sometimes, kids don’t have enough time to finish eating, so simply extending lunch breaks can help. Then there’s making sure that lunch comes after recess instead of before it. Finally, lunch breaks in some schools fall too early in the day, before students have had the time to work up an appetite. Pushing them back could ensure cleaner plates.

Such food waste interventions, if implemented widely, could lead to a staggering amount of savings—every weekday nearly 100,000 schools serve lunch to 29.6 million students, with up to $1.7 billion lost per year in waste.

Madeline Keating, a city strategist for NRDC, said she believes progress is being made on the overall issue of food waste because “a lot of people don’t realize that they’re wasting so much food.

“People can relate to food in a way that they might not be able to relate to some of these other big climate issues. And it can be an ‘in’ for a lot of people. It’s deeply emotional, it can tie people back to their history and their culture,” Keating said. “It’s very empowering for people to know that they can make tangible differences in their own home.”

Empowerment, Rosenthal said, is important for food service staff, as well, even though they are often omitted from conversations about preventing food waste in schools. So the food and nutrition services department has offered cafeteria staff opportunities for professional development, including food presentation (to entice students), educational sessions on food systems, a food waste documentary screening and training for federal school meal programs.

But much work remains to be done in overhauling the school district’s food system.

“Our farm manager could potentially pick up compost from these schools and bring [it] back to the farm to create, you know, soil that we need for our plants,” Rosenthal said.

Food waste prevention efforts aren’t “the sexiest” initiatives, she said, but when it comes to students’ health, environmental literacy and understanding of climate change, “they could have the greatest potential impact.”

Agya K. Aning is a Roy W. Howard fellow at Inside Climate News focusing on environmental justice. He earned a master’s degree in investigative journalism from the Walter Cronkite School of Journalism at ASU in 2020. Before switching careers to journalism he taught English as a second language in China and Taiwan, where he also studied Mandarin. His work has appeared in the Arizona Republic, the Milwaukee Journal Sentinel, USA Today, Poynter and The Trace.