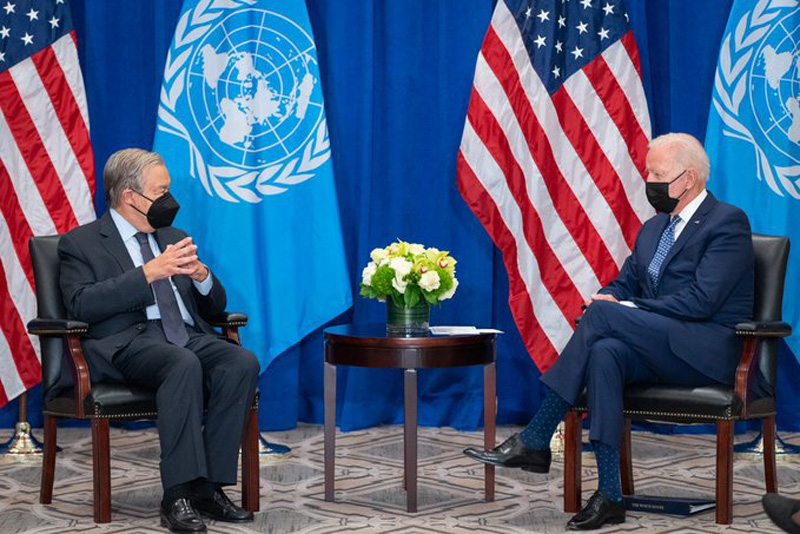 Joe Biden spoke of peace and diplomacy at the U.N. but support for defense spending and war making are bipartisan imperatives that prevent the people’s needs from being met.

In the same week that Biden delivered a speech at the United Nations where he argued that force had to be “our tool of last resort, not our first,” and that “many of our greatest concerns cannot be solved or even addressed by the force of arms,” the National Defense Authorization Act (NDAA), that represented another record-breaking increase in Pentagon spending, was passed in the House of Representatives. The message, following that of the racist Theodore Roosevelt , is that if there is going to be dialog the U.S. is still going to “speak softly and carry a big stick” to keep the natives in line.

The authorization to spend 780 billion dollars on the military, which included an increase of twenty-four billion dollars more than the Biden White House requested, came just a few days after Biden announced to the world that the U.S., United Kingdom and Australian governments (AUKUS) would collaborate to provide nuclear powered submarines for Australia. Without mentioning the real target of that dangerous escalation, the Chinese and the world understood that this was a message intended for them.

So, no one listening to President Biden in that General Assembly gathering took the U.S. administration seriously. And certainly, those of who have been the victims of U.S. violence should not either. We know though painful experience that white supremacist, colonial hubris imprisons U.S. policy makers rendering them unable to change course away from their disastrous commitment to global full spectrum dominance.

U.S. policy makers from both parties are gripped by the pathological belief that they can prevent further erosion of U.S. power and exercise global hegemony through military means. But continued reliance on military power to advance U.S. global hegemony creates a contradictory relationship with the public that makes militarism extremely vulnerable – potentially. Because, in order to allow the plunder of the people’s resources by corporations whose business is war, the consent, or at least acquiesce of the people is required.

There is a complete disconnect between the Congress that continues to be able to muster up bipartisan support for war and the public that has increasingly grown weary of these adventures and their costs in terms of lives, resources, and U.S. prestige.

The obvious commitment to military spending and military pacts like AUKUS and NATO is increasingly being questioned by the public. While Congress is on board to support these agreements and militarization as policies meant to intimidate China and Russia (as well as military interventions into the global South), a majority of the people from both parties are actually in opposition to continued war and militarization. Moreover, the failure to provide protections for the human needs of the people of the U.S., with the debate over a social infrastructure bill stalled in Congress, is only deepening the legitimation crisis.

The sharpening contradictions between a public still reeling from consequences of covid and a Congress that, in its need to support the positions of its rich benefactors, will allow critical support for the working class like the eviction moratorium and emergency unemployment benefits to end, is creating a potentially explosive situation politically.

War is and has always been a class issue. The poverty-conscripted U.S. army and the increasingly insecure and suffering civilian working classes are finding it almost impossible to embrace policies that have resulted in a staggering $8 trillion dollar rip-off of the people’s resources, thousands of U.S. lives lost and over a million lives of the targets of U.S. aggression during the twenty yearlong phony war on terror.

What does this mean for Black and poor people? The racist spectacle on the Texas border with cowboys whipping Black people primarily from Haiti and the systematic violation of Haitians’ right to seek asylum with the swift deportation of thousands of was a metaphor for the real value of Black lives in the U.S. and globally.

It also means more war on African and colonized peoples in the U.S.

Rep. Ayanna Pressley (D-Mass.) highlighted the connections between the Pentagon’s massive budget, surplus weaponry, and widespread police violence in the U.S., as she argued for an amendment to the NDAA that would have ended the Department of Defense 1033 program, the program that transfers military-grade weapons from the Pentagon to federal, state, and local Law Enforcement Agencies across the country:

“With police departments nationwide set to receive a massive influx of military equipment under the 1033 program following the Afghanistan war,” Pressley told The Intercept, “Congress must take decisive action before further lives are lost and more trauma is inflicted on our communities.”

Her appeal was ignored.

Contained in the 2022 NDAA that the House of Representatives approved on September 24th are resources to continue the 1033 program. The NDAA also contained resources to fund the vast global military command structures like AFRICOM on the African continent and the over eight hundred military bases across the planet.

War, militarism, and subversion is central to the U.S. imperial project. It is not just against Black people. The U.S. is actively engaged in subversion of democracy in Nicaragua, continues the assault on Venezuela and the illegal embargo on Cuba, while imposing economic sanctions on over thirty nations.

The diplomats in that great hall at the UN knew that Biden was lying about  U.S. diplomacy. And, like them, those of us at the receiving end of U.S. criminality have always understood that Biden had to lie because state violence is at the core of the settler and imperial projects like the U.S, and even more so when the colonial project becomes an empire. That is the reality we in the U.S. and the world face no matter who sits in the white peoples’ house and no matter what pretty words are read out at the United Nations General Assembly meetings.